The Afghan women’s national team fled to Australia when the Taliban took over. FIFA, yielding to Afghanistan’s soccer federation, no longer recognizes the team.

Afghan soccer players warmed up before their first league game as part of a Melbourne, Australia club in April.Credit…Gabriela Bhaskar/The New York Times

Send any friend a story

As a subscriber, you have 10 gift articles to give each month. Anyone can read what you share.

When the Afghanistan women’s national soccer team watches the men’s World Cup, every image on the TV screen feels bittersweet.

Each country’s flag flying high and each roaring, roiling cheering section. Each national anthem echoing across a pristine pitch. The Afghan women’s team, still in the developmental stages after years of playing in a war-torn country, hopes to be good enough someday to take part in soccer’s most prestigious tournament.

But this year’s men’s tournament, with all its pageantry and thrill, is just a stinging reminder of how distant that ambition remains after the players fled their country last year when the Taliban took over.

The Taliban have barred girls and women from playing sports. And the women’s national soccer team is still feeling the effect of it even though its members have settled in Australia, 7,000 miles away and safe from the Taliban. Because the Afghanistan Football Federation doesn’t recognize the team as an official national team, neither does FIFA, the global governing body of soccer.

Now the players who risked their lives to play soccer inside of Afghanistan, and then risked them again to flee for a shot at freedom, are no longer eligible for international competitions. They are calling on FIFA to reinstate the Afghan squad so the women can officially represent their country. 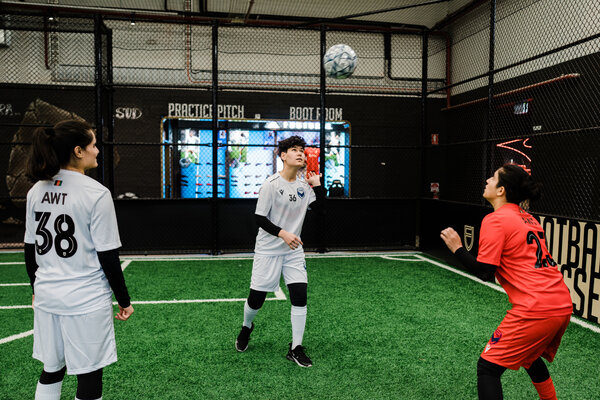 “We had to leave our home and stop our dreams, but it always was our goal to play as a national team again,” said Fati, the team’s goalkeeper who lives in a suburb of Melbourne. (The New York Times is not using the players’ last names at their request because they fear retribution from the Taliban.)

“Now it looks like us playing for the national team is not going to work anymore. My heart can’t stand this,” Fati said.

She added, “FIFA has the money and the power to help us, but it’s not doing anything.”

Khalida Popal, one of the founding players of the Afghan women’s national team and the person who orchestrated the team’s escape from Afghanistan, said, “FIFA will say they don’t want to get involved in politics, but this is a human rights issue and they know it. They’ve just chosen to discard us.”

FIFA officials, including President Gianni Infantino and Sarai Bareman, the federation’s chief officer for women’s football, did not respond to repeated requests for comment about how the Afghan women’s team could return to the international game, as the players in Australia have been ready to play and travel for months.

Firooz Mashoof, spokesman for the Afghanistan Football Federation, said there was nothing the Afghan federation could do to help because, as he explained, the women’s national team dissolved when the players and women’s soccer committee fled the country. Inside the country, the 50 or so women’s soccer teams — from youth to the club level — also have vanished, he said.

The federation has yet to discuss the future of women’s soccer with the Taliban, Mashoof said, because “the situation of women’s human and social rights in Afghanistan is not good.” He said FIFA would have to step in to make something happen.

The Afghan players and some human rights activists, including Minky Worden, director of global initiatives at Human Rights Watch, said that couldn’t happen soon enough. Worden noted that the men’s senior national team, which did not qualify for the World Cup, and other Afghan men’s nationals teams, including ones for boys under 14, continued to play internationally while the women’s side of the sport had been completely shut down. That glaring inequality of opportunity, she said, is a violation of the Olympic Charter and FIFA’s own rules regarding human rights and nondiscrimination.

“Right now, the Afghan federation is absolutely in full, flagrant violation of FIFA’s human rights policy and should be thrown out of the football world until women and girls can resume playing football in their country — and for their country,” Worden said. “The Taliban is totally getting away with banning women and girls. Global governing bodies like FIFA have an obligation to thwart what is happening.”

Worden said it was time for the International Olympic Committee to suspend the Afghanistan Olympic Committee. The I.O.C. did so in 1999 after the Taliban barred girls and women from sports the first time it came to power, as it is doing now.

Friba Rezayee, who competed in the 2004 Athens Games as one of Afghanistan’s first two female Olympians, said in a telephone interview that the I.O.C. and FIFA are actively ignoring the humanitarian crisis that is unfolding in Afghanistan.

“Just last week, the Taliban beat people, including women, inside a stadium where athletes should be playing their sport,” said Rezayee, a judo competitor who fled to Canada in 2011. She added that dozens of female athletes in Afghanistan have told her that the Taliban is hunting for women who play sports so they can punish them. She heard from one judoka who recounted being beaten by the Taliban with a rifle when they found her practicing at her dojo. The soldiers let that woman go so she could be an example to other women who dare to play a sport, Rezayee said.

“What more does the I.O.C. and FIFA have to see to stand up for female athletes?” she said. “These organizations have the capacity and the budget to ensure the safety of athletes and also ensure that women are free to play their sport.”

I.O.C. action against the Afghanistan Olympic Committee could happen next week. Mark Adams, spokesman for the organization, said the I.O.C. was “very concerned about developments regarding the participation of women and girls in sport in Afghanistan” and that the executive board would review the issue at its meeting on Dec. 6.

If the I.O.C. goes forward with that suspension, it will put needed pressure on each sport’s international federation to decide whether its Afghan athletes can participate in non-Olympic international competitions. But FIFA doesn’t have to wait. It already has the power — and the duty, Worden said — to suspend the Afghan Football Federation for its exclusion of girls and women, bypassing the Taliban so girls and women can compete.

One international sports federation, the International Cycling Union, has taken the initiative to help the Afghan women without any prodding from the I.O.C. The organization has been going out of its way to support Afghan cyclists and find ways for those women to compete, showing other federations — such as FIFA — that it is possible to do so without making it a political statement.

David Lappartient, the president of the cycling union and a French politician, used his political and sports connections to help evacuate 125 people, including cyclists and other athletes, from Afghanistan. The federation has since sponsored a group of cyclists who now live and train in federation housing in Aigle, Switzerland, the cycling union’s home base. Last month, the federation also hosted the Afghanistan women’s cycling national championships, and more than four dozen Afghan women competed.

“We must address a message of hope that sports is possible for women when it is quite difficult or impossible now in Afghanistan,” Lappartient said. “I just want to give this idea that the light is still on.”

But the level and depth of competition at Conifa is not what the Afghans have been used to at the FIFA level, where 187 women’s teams compete. In comparison, Conifa’s website listed only three women’s programs in its rankings from July: FA Sapmi (from the Indigenous Sami people who inhabit part of Norway, Finland, Sweden and Russia), Northern Cyprus and Tibet.

For the Afghan women, the goal is to return to play under FIFA’s umbrella. To get there, Popal, who lives in Denmark, has sent multiple emails to FIFA officials asking them for help reinstating the Afghan team. For months and months now, she has yet to receive an answer.

Last month, she also filed an official grievance with FIFA, writing, “All the coaches and players need to have their right to play respected and FIFA has the responsibility to guarantee our right to represent Afghanistan, even in exile.” At least a half dozen current and former players have also filed grievances, she said.

In addition, the Afghan players have been hurt by the re-emergence of Keramuddin Keram, the former president of the Afghanistan Football Federation, Popal said. Keram, who was charged with sexually abusing players on the national team after Popal made the case public, had been hiding from authorities after his indictment. Now, with the Taliban in charge, he has returned to public life.

“Our players have suffered so much in so many different ways, and it’s disgusting how they’ve been treated,” Popal said.

Popal and the national team players said they didn’t want the I.O.C. or FIFA to bar the Afghan men’s team because the women’s team does not exist anymore. There should be a way for both the men’s and women’s teams to play, even while the Taliban is in control of the country, they said.

If FIFA isn’t willing to help, Popal said she would like to establish a football association that includes all the players living in the Afghan diaspora and run that association from outside of Afghanistan. Other countries affected by war or countries that curtail the rights of women could follow her lead, she said.

Already, Popal has ideas of running a training camp for the senior national team players in Australia, the under-17 players who ended up in England, the under-15 players who are now in Portugal — or any female Afghan soccer player. During that camp, there could be a tryout for the senior team that would theoretically play FIFA tournaments, she said.

Fati, for one, would love that idea. Her dream as a young goalkeeper was to play in the World Cup. But right now, with the current restrictions on the national team and the practice the Afghan team needs to reach the sport’s highest level, the closest Fati will get is when the Women’s World Cup is held in Australia and New Zealand next year. Melbourne, Fati’s new home, will be a host city.

While waiting to hear about its fate with FIFA, the Afghan team has been playing together at the professional club Melbourne Victory, with that club supporting the team’s travel, training and gear. The team competed in a state league and finished third in its division.

But the players want so much more.

“I am so mad at FIFA right now,” Fati said. “They are always saying that football is a family and that they take care of their football family. But that’s not the truth. They don’t care about us. They have forgotten us.”