Here's how The Sun-Herald recorded the first day of competition at the Sydney Olympics, with our relay kings Ashley Callus, Chris Fydler, Michael Klim and Ian Thorpe on page 1. 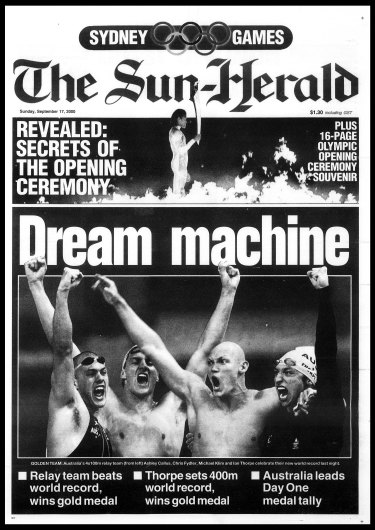 The front page of The Sun-Herald on September 17, 2000.Credit:SMH

The 17-year-old is now an official superstar. Thorpe had the hopes of the nation on his shoulders in the first night of finals at the Olympic pool and delivered in unforgettable fashion. He started with gold in his pet 400m freestyle, breaking his own world record. 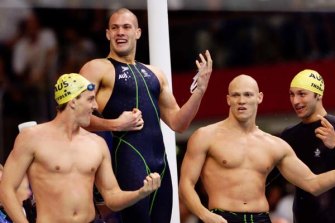 Less than an hour later, he was back in the water to anchor what will go down as one of the greatest Olympic relays of all time. The Australian team of Michael Klim, Chris Fydler, Ash Callus and Thorpe have beaten the Americans in the 4x100m freestyle relay. The outspoken Gary Hall Jnr looked as if he would overhaul Thorpe in the final leg but the teenager found something special to claw back the margic and surge to the wall for gold.

It was the first time the USA had ever lost the event at an Olympic Games and they celebrated by playing air guitar; a reply to Hall's pre-Games suggestion that Team USA would 'smash them like guitars' in the final.

Silver for Michellie Jones in a triathlon thriller 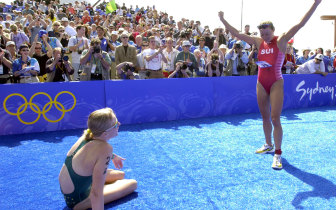 So close… Brigitte McMahon celebrates as Michellie Jones watches on after the triathlon.Credit:AP

Jones could almost taste that gold medal before she was overhauled late in a dramatic finale by Brigitte McMahon from Switzerland. Jones was the pre-race favourite and looked all over a winner before a dramatic conclusion where she couldn't sustain her lead on the run leg with the end in sight.

It was a good day for the Australian contingent with Loretta Harrop and Nicole Hackett fifth and ninth. Jones was brave and finds a spot in the history books as the first Olympic triathlon is run and won.

No horsing around for our equestrian stars…

Andrew Hoy has put Australia on the front foot to defend the three-day eventing title with a world-record equestrian performance that has the home nation in the lead.

A victory for Hoy would be his third-consecutive Olympic title after being part of the team in Barcelona in 1992 and Atlanta in 1996. Also riding for Australia in Sydney are Phillip Dutton, Matt Ryan and Stuart Tinney.

The International Olympic Committee president has left Sydney after his wife Maria fell ill from cancer. We have since learned that she has sadly passed away and Samaranch will make his return to Sydney soon, with the Olympic flag to be flown at half-mast as a sign of respect.

It was Samaranch that famously declared Sydney to be the winning bidder for the 2000 Olympics so he will always have a special place in the hearts of Sydneysiders.

Medals starting to flow at the velodrome

It was the nearest of things but Michelle Ferris would win silver after being beaten right on the line by Felicia Ballanger of France in the women's 500m time trial. And Shane Kelly would pick up bronze with his ride in the 1km time trial.

Nobody could forget Kelly's mishap four years ago in Atlanta when his foot slipped off the pedal before the time trial start. He was the world-record holder and favourite then so it's a wonderful result to see him on the podium in Sydney. 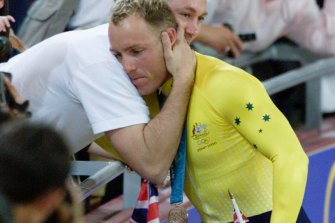 Shane Kelly is congratulated by his brother after winning bronze. Credit:Mal Fairclough

We have our first medal of the Sydney Olympics

Nancy Johnson. That's a name you are unlikely to ever forget. The American has just won the first gold medal of the Sydney Games with gold in the women's 10m air rifle. 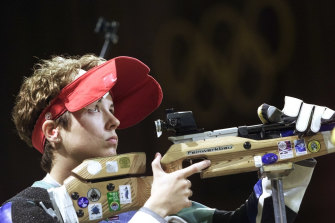 Nancy Johnson in the 10m air rifle in Sydney.Credit:AP

Jubilation for the town of Downers Grove, Illinois, as Johnson prepares to stand atop the podium and give the Star Spangled Banner the first of what we assume will be many airings across the Games.

It's special enough winning Olympic gold but it must be even better to jag the first one on offer. Hopefully Australia can find a few as well on a day of heavy expectation, especially in the pool.

Let's wrap up some of the other day one action for you as results come to hand. It was a good start for the Opals, who breezed through their Olympic opener with a win over Canada. It was equally good news for the women's water polo team, who are the favourites for this tournament, who thumped Kazakhstan to get off the mark in style.

At the breathtaking beach volleyball arena at Bondi, the Australian pairing of Tania Gooley and Pauline Manser had a strong win over Italy, while archer Simon Fairweather, in his fourth Olympic campaign, made some moves early and has emerged as a medal contender. He was the Young Australian of the Year in 1991 so let's hope he hasn't peaked early. 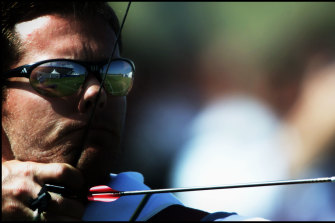 There has been some good news out at the shooting range, with defending Olympic champion Michael Diamond setting himself up strongly after leading the competition through qualifying. He will shoot for gold on day three.

Diamond shot to fame in Australia with his Atlanta gold medal and went on to win at the Kuala Lumpur Commonwealth Games as well. Another gold would cement his place as one of our Olympic greats.