After decades of resisting calls to change their name, the Cleveland Indians announced last July that they would discuss the future of their moniker in the wake of intensified calls for social reform throughout the country. Five months later, the team went a step further, saying it would drop the name it has used since 1915, beginning as soon as the 2022 season.

Within days of the initial summer announcement, the United States Patent and Trademark Office received several trademark filings for potential new names. Among them was an early favorite option among oddsmakers: the Cleveland Spiders.

But the request didn’t come from anyone representing the baseball team. Instead, the application was submitted by a man who lives in a suburb of Portland, Ore., and works for a cellphone company.

How Arlen Love, 33, ended up here is a story about many things: his passion for his hometown and its sports teams; his T-shirt-making hobby; his awakening over Cleveland’s current name; the many hoops teams must jump through to change their names; and the complex rules that govern trademarks. Mixed in there as well is the potential for profit.

“I don’t know anything about this,” Love said in a recent phone interview when trying to explain the nuances of trademark law.

Among the nuances is trademark squatting, a process in which relatively unknown people try to predict names that will be valuable and file trademarks in advance of announcements solely so they can later sell the name. It is a process discouraged by the U.S. Patent and Trademark Office.

While Love insists he is not trademark squatting, he acknowledges his willingness to consider selling the trademark in the future, should his application eventually be approved. 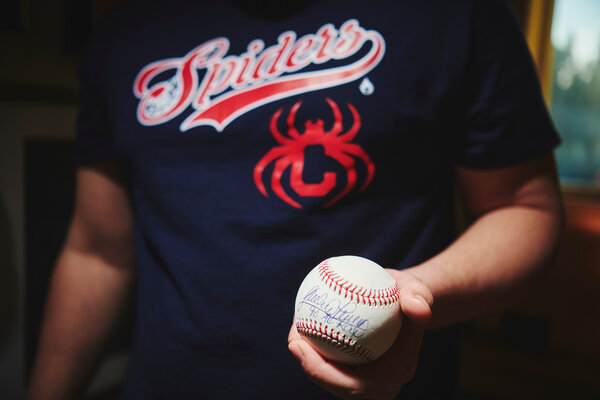 But for Love, this endeavor started when it became clear that Cleveland would change its name.

The movement to dispatch prejudicial and controversial names and symbols hastened after George Floyd, a Black man, was killed by the police in Minneapolis last May and protests ensued. Schools and government buildings moved to change their names, companies rebranded their products and statues came down.

Perhaps the most high-profile about-face occurred in sports. Despite people having pushed for years for Washington’s N.F.L. franchise to change its logo and name, which had long been considered a slur against Native Americans, the team’s owner, Dan Snyder, had said he never would. But after increased pressure from corporations and investors, Snyder relented and the team announced on July 3 that it had begun a review of its name. Ten days later, it ditched the name and became the Washington Football Team, a place-holder name as it navigated the complex trademark and licensing worlds.

Changing a team name is an enormous undertaking because the moniker and logo are present on everything from merchandise to websites to sponsorship deals, and trademarks are needed to protect them. In such cases, trademark squatters tend to come out of the woodwork.

“This is good advice for anyone doing any product: Before you make it public, file,” said Andrew Skale, a San Diego-based trademark attorney at the law firm Mintz, who is not working with the Cleveland team or Love.

“The U.S. trademark office offers this kind of unique ability to file when you haven’t started using it, so take advantage of that,” Skale said. “Because I’ve seen when people that have issued news releases about new products and haven’t filed yet, and then they have problems later because some idiots decided to squat on them.”

Love insists that his interest in the Spiders name comes from the heart. Whether the trademark application was inspired by that or the billfold, it’s certainly true he grew up a die-hard Cleveland sports fan. Although he considers the N.F.L.’s Browns his primary team from back home, Love grew up attending baseball games because of his family. His favorite player was catcher Sandy Alomar Jr., one of the stars of the talented 1990s teams that reached the World Series twice.

“I thought Cleveland sports was just going to be on fire my whole life,” Love said during a video interview in which he wore a T-shirt for the N.B.A.’s Cavaliers while seated in front of two signed Browns jerseys on the wall.

Love said when he was 7 years old his parents, whom he jokingly described as hippies, took him to the annual Hessler Street Fair, which blended music, flea markets and activism. He remembered his father wearing a pin that featured a strike through the image of Chief Wahoo, a caricature of a Native American used by the baseball team until it was phased out in 2019, and seeing other people call for an end to the logo.

Back then, Love said he didn’t understand the opposition and thought perhaps the people opposed to the name and symbols were Yankees fans.

He eventually got rid of most of his gear with that iconography, though he hung on to a vintage Bob Feller jersey with the original Chief Wahoo logo.

Over the years, Love dreamed of potential name replacements. He was always fond of the nickname Spiders because no other major professional sports team had it, and the arachnids looked and sounded cool despite their unfortunate history in Cleveland. From 1889 to 1899, the Spiders were a National League team. In their final season before disbanding, they went 20-134, still the record for the worst mark in major league history.

“What a perfect name for Cleveland,” Love said. (After the Chicago Cubs defeated Cleveland in the 2016 World Series, Love’s favorite baseball team holds the longest active title drought in baseball, dating back to 1948.)

He did some research online about trademarks and was surprised that there was none active for the Cleveland Spiders. So he talked to a friend of a friend who is a lawyer and filled out his own application. It cost $275. Because he said he was mostly doing it for fun, he applied only for a trademark for jerseys, and not for all the others needed by a sports franchise.

While he said selling the trademark to Cleveland’s owners was not his original intent, he would happily talk to them.

“It’s kind of like if you bought something you liked, and then it became a collector’s item and someone offered you enough money for it, would you sell it?” he said. “Maybe, yeah.”

Over the winter, the Spiders name came up frequently when discussing potential replacements, but Love is skeptical it will get picked. He said he doesn’t like the other trademarks the current Cleveland club has held since 2010: the Blues, Bronchos and Naps — all previous names for the franchise dating back to the turn of the past century.

“You can’t call a sports team in Cleveland the Blues,” Love said. “It’s just too sad.”

(The team declined to comment via a spokesman. Owner Paul Dolan has said the new team name would not have Native American themes.)

Love’s favorite name replacements are, of course, his own and someone else’s, the Guardians, which is a reference to the statues on the Hope Memorial Bridge in the city. He insisted he wasn’t trademark squatting; because he is a Cleveland native who has designed other gear in the past, he has long had a connection to the city’s sports teams and he doesn’t really know what he is doing in terms of the trademark application anyway.

In December, the U.S. Patent and Trademark Office preliminarily rejected Love’s filing for a various reasons, including that his application was incomplete and his mark could be confused for the University of Richmond’s Spiders.

Love faces an uphill battle. While buying existing trademarks does happen, Skale said prospecting for trademarks is not as profitable as, say, domain name squatting, because trademarks can be challenged for bad faith, are complicated and require a company or person to show a continued use of it or it is forfeited.

Recently, Love wore a Spiders hat and T-shirt created by two other Cleveland-based groups because he liked their gear and logos better than his own. If that name ultimately gets chosen by the Dolans, Love said he might get a Spiders tattoo.

“I really hope they take their time and make a decision that makes the Cleveland people really happy,” he said.