They say too many cooks spoil the broth, and that was certainly the case as Salt Bae desperately attempted to join Argentina’s World Cup celebrations at the weekend.

The South American country were crowned world champions in Qatar on Sunday after getting the better of an enthralling final against France, who fought back twice to earn a 3-3 draw after normal and extra-time before losing on penalties.

At the fifth time of asking, Lionel Messi finally got his hands on the World Cup to further solidify his standing as one of the game’s greatest ever players, with the PSG superstar and his international team-mates ecstatic after getting over the line. 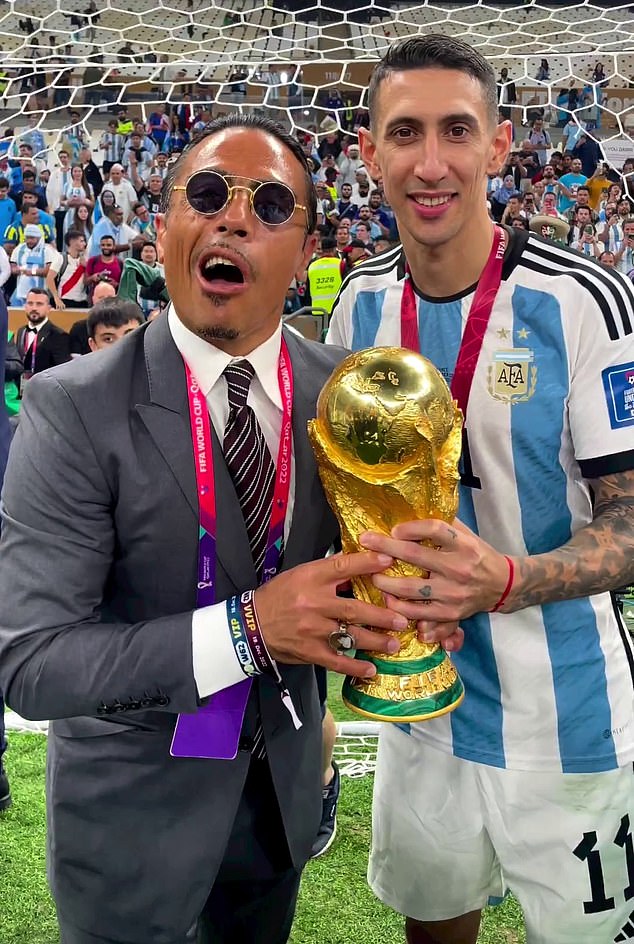 Yet as they celebrated their triumph on the pitch in Lusail, Argentina players were joined by a slightly over-enthusiastic Salt Bae – whose cringeworthy attempts to hold the trophy have gone viral on TikTok.

In a series of videos posted on his own Instagram, the famous steak chef interrupts the likes of Angel di Maria, Cristian Romero and Lisandro Martinez as they pose with the World Cup, leaving the trio looking rather awkward as a result.

TikTok user @stevensaysstuff shared brief snippets of the embarrassing clips, in which he even attempts to recreate his trademark sprinkling technique over the trophy, which is described in the video as ‘the little salt thing that we’re all tired of’.

Salt Bae, real name Nusret Gokce, could also be seen trying to get Messi’s attention as the Argentina captain prepared for one of the proudest moments of his career in lifting the World Cup trophy. 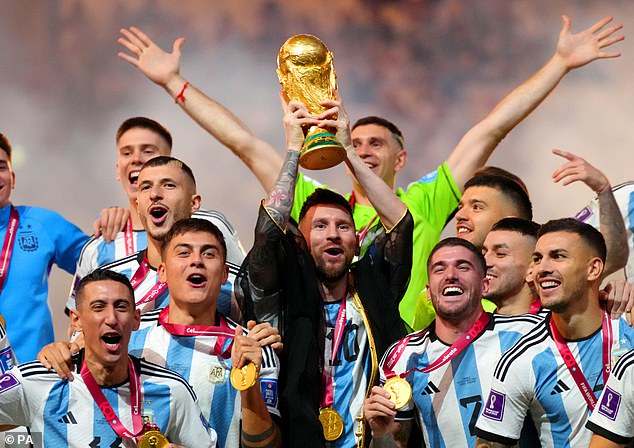 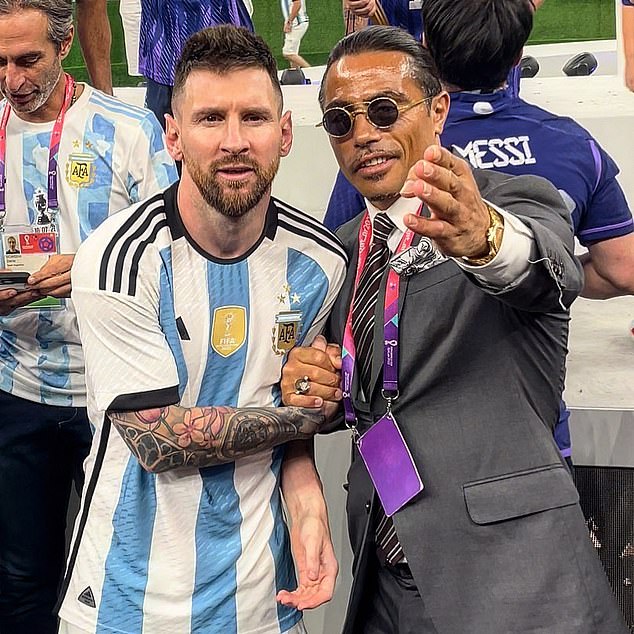 After clinching the trophy, Messi and his Argentina team-mates were joined by Salt Bae 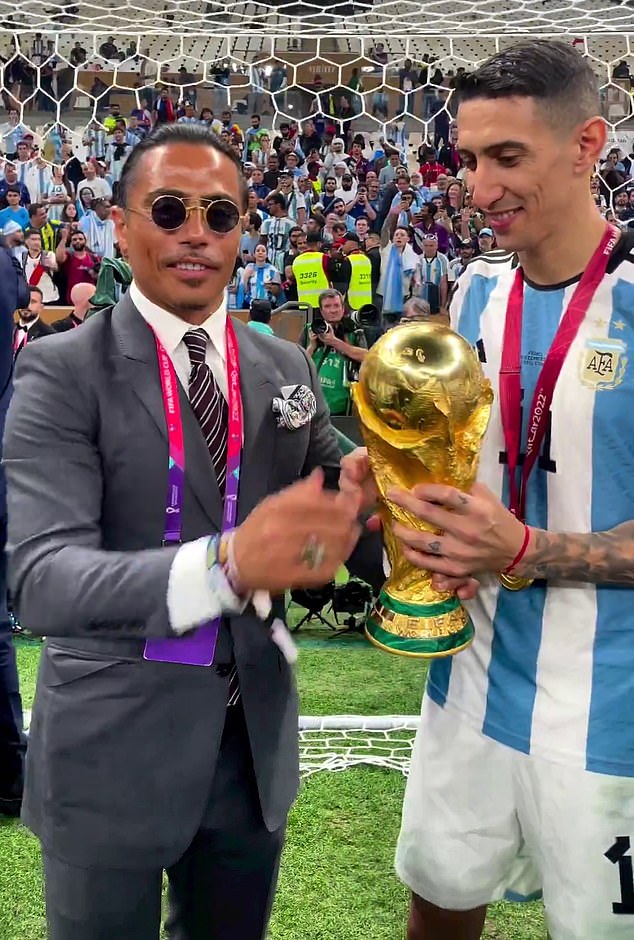 In footage shared on social media, the Turkish restaurateur is seen putting his hand on Messi’s shoulder and encouraging him to reluctantly shake his hand, despite the player’s obvious concern, before trying to pull him back again.

In the Twitter video captioned ‘Even Messi knows salt bae is a hack’, furious fans questioned why Salt Bae was even allowed onto the pitch.

One fan said: ‘F***ng absurd. Who let Saltbae out on the pitch? Saw a bunch of photos of him HOLDING the World Cup trophy, and even a picture of him biting on a medal.

‘At least Messi knew not to give that guy trying to make THEIR moment about HIM any attention. Desperately grabbing Messi.’

In light of Salt Bae’s uncomfortable antics, FIFA are also facing questions as to how the celebrity chef even gained access to the pitch at the Lusail Stadium and managed to come in touching distance of the trophy.

Football’s governing body have very strict rules surrounding the World Cup trophy, with a very specific list of those allowed to touch it on their website. 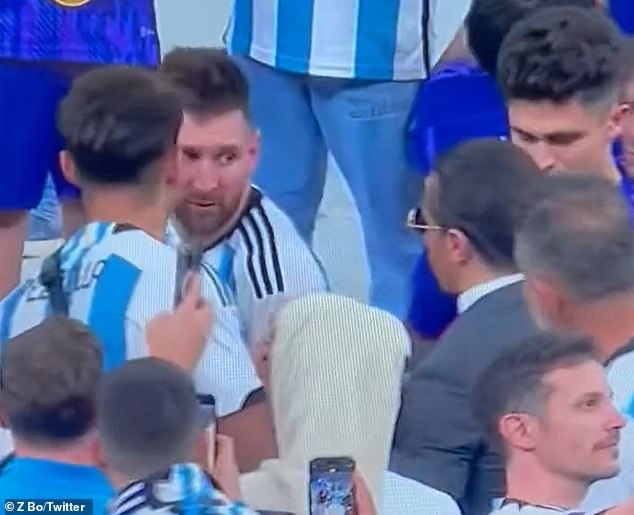 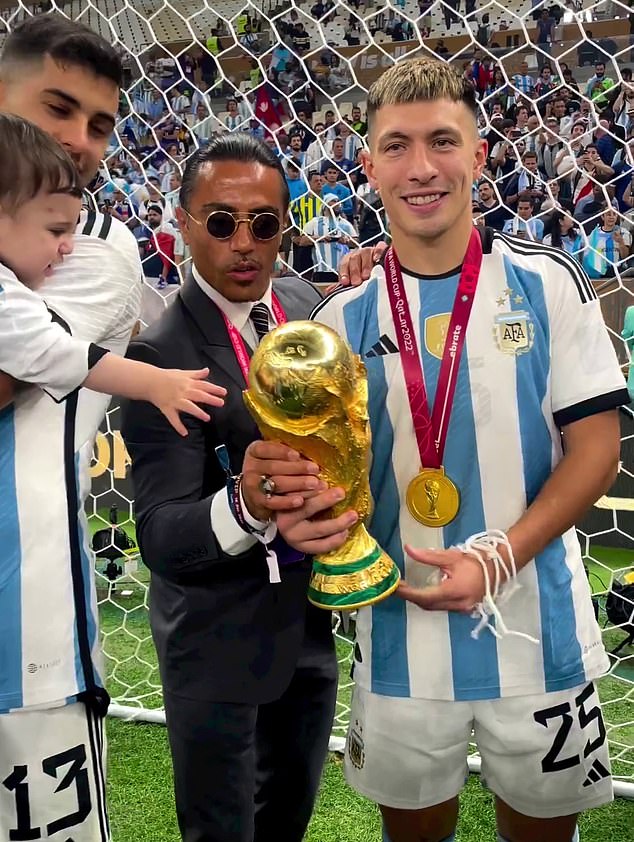 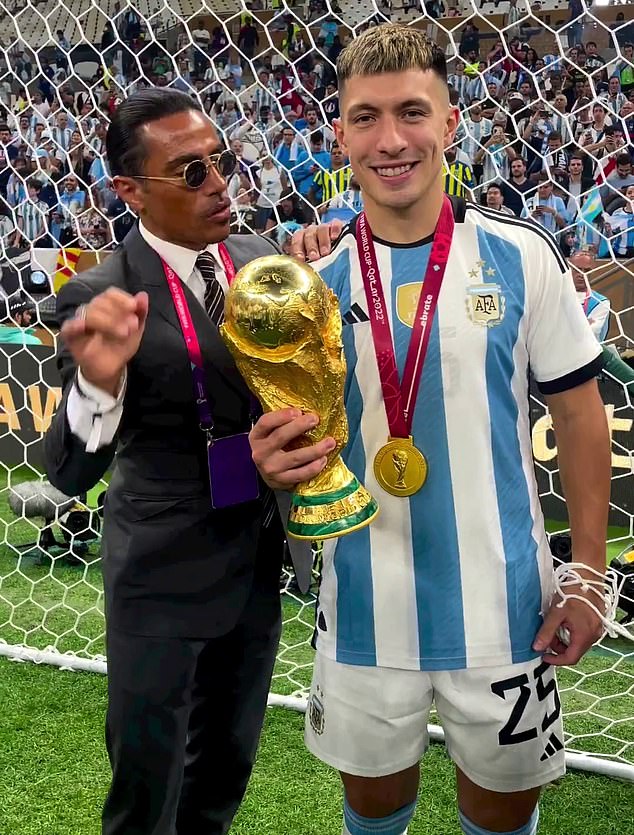 ‘Its current design dates back to 1974,’ FIFA’s website reads. ‘As one of the most recognised sports symbols in the world and a priceless icon, the original Fifa World Cup Trophy can only be touched and held by a very select group of people, which includes former winners of the Fifa World Cup and heads of state.’

While he is a friend of notorious FIFA president Gianni Infantino, Gokce – the owner of a popular steak restaurant chain – does not fall under any of the criteria above, and therefore appears to be in contravention of this particular set of guidelines.

He was also pictured with official FIFA accreditation while on the pitch on Sunday evening, although the governing body has not commented on how this happened.

Salt Bae was thrust into the spotlight back in 2017 after an iconic video of him sprinkling salt onto a steak went viral online.

The 39-year-old has since developed friendships with many high-profile celebrities, including a number of football stars who visit his restaurants on a regular basis.