IN the end not so much a damp squib – just a drenched, sodden and ultimately sunk one.

Enable’s bid for racing history, for a record-breaking third Arc de Triomphe, bogged down on a surface more suited to seahorses than racehorses. 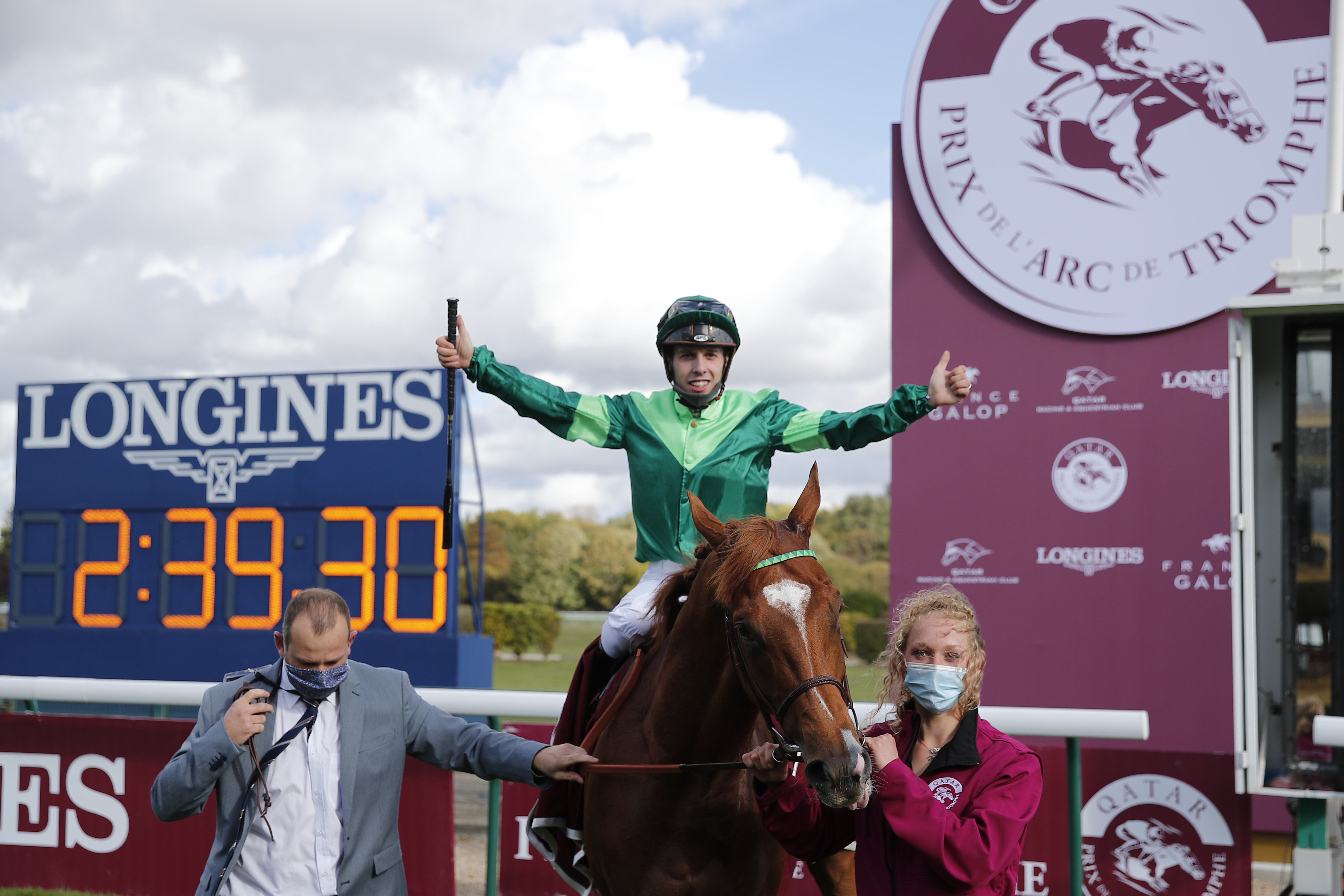 And as a result no fairytale finish. No tears of joy. No triumphant, flying Frankie Dettori dismount for one last time.

But no less Enable will head into retirement — assuming, of course, that’s what owner Prince Khalid Abdullah decides — as a true legend, the horse of a lifetime for so many.

John Gosden had feared the worst beforehand. He had described the Longchamp going as the worst he had ever seen.

Not hock-deep in puddles, but more cloying, holding and stamina-sapping.

The sun on the day made it even tougher than if it had simply stayed wet.

If it hadn’t been Enable, if she hadn’t been trying to add that one last historic notch to an already glittering CV, you doubt whether Gosden would have even sent her to post.

How he’d have loved to be wrong, as he watched from back home at the yearling sales in Newmarket.

Buffeted and bashed in a brutal final two furlongs as they concertinaed heading down the straight she was, but that wasn’t why Enable was beaten.

Yes, she may have finished slightly closer than the sixth place in which she coasted home behind winner Sottsass, but Frankie was easy on her when the chance had gone.

And how ironic was the winner’s story, by the way.

After all, we were praying the Arc would go to a horse whose entire season had been geared around this one day. So it was.

Unfortunately though, not Enable, but the horse who finished one place behind her in third 12 months previously.

To Sottsass, who trainer Jean-Claude Rouget, celebrating his first triumph, had brought to a peak for this.

You couldn’t disguise, though, that the going didn’t help. As a rueful Dettori admitted as he trudged back to the weighing room: “It was too deep — it killed her action.”

The late withdrawal of the four Aidan O’Brien horses, far from making the job easier, actually proved more of a hindrance too as at least one or two of them would have made it a truer test rather than a typically French three furlong race to the line.

The armchair experts will no doubt pick his tactics to bits. Why didn’t he have her closer to leader Persian King? Why did he get stuck in the pack?

It didn’t help when the leader drifted left, and Sottsass followed, even less when Gold Trip came in from the other side and she was banged by stablemate Stradivarius.

Yet if she had been good enough she was still close enough to have quickened. This time, though, she wasn’t.

No excuses, no hard luck stories . . . just not good enough on the day.

Dettori admitted, before he dashed off to catch his plane back to England: “I wanted to make the running but couldn’t because in first 400 metres she was out of her comfort zone.

“At 500 out I was looking for a good spot but when I pressed the button there was nothing there. She was exactly where I wanted but couldn’t pick her legs up on the ground. It just wasn’t to be.”

Yet in some ways such a comprehensive loss almost made it easier to take.

Remember how hollow and empty it felt when Waldgeist nailed her deep in the final furlong a year ago.

Imagine if she’d been chinned on the line yesterday.

Imagine the sense of what could have been.

Well this time there was no near-miss. Just ultimately a sense of relief that she came back in one piece, in what — surely — will be her final appearance in combat.

Prince Khalid, as he does with all his horses, will wait to see how she is this week and there remains one tantalising, tempting thought he may decide to give it one more go.

But really that is expecting too much of an owner who has already been more than sporting in keeping her in training as a six-year-old, when so many would have packed her to stud by now.

And if she does head off to a life of luxury, don’t let this defeat be the abiding memory. It hasn’t been a career based on defeat.

Three King George wins — something no other horse has managed by the way — a Breeders Cup, an Oaks, the Eclipse, more Group 1s than you can shake a stick at.

In anyone’s language it has been a glittering career.

If it is the end, don’t look back on this one loss, just be thankful you got to see her at all.