Andoo Comanche has taken line honours in the Sydney to Hobart ahead of a tussle for the minor placings on the River Derwent.

The 100-foot yacht won on its first Sydney to Hobart outing since its 2019 victory, taking its line honours total to four. 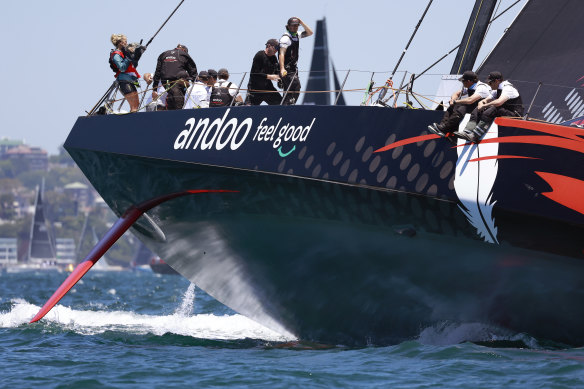 Andoo Comanche during an eventful Sydney to Hobart start on Boxing Day.Credit:Getty Images

LawConnect, defending champion Black Jack and nine-time winner Wild Oats were caught in a race within a race behind.

Northerly winds that helped the fleet across Bass Strait picked up on Tuesday evening as the leading four super maxis sailed off Tasmania’s east coast, but hopes of Comanche’s 2017 line honours record time being broken were dashed.

Andoo Comanche navigator, Justin Shaffer, had earlier said they were pleased with their progress.

“We had a great night. A dream run. [The] crew is holding up well and so is the boat,” he said.

Wild Oats made up ground during the day after being hamstrung by a split sail overnight.

Speaking on Tuesday morning, LawConnect sailing master Tony Mutter said it had been a “pretty decent” run across Bass Strait.

Sydney yacht Koa became the third to retire from the race after losing its rudder in Bass Strait. All the crew were OK, according to race officials and police.

Water police sent a vessel to assist, with the stricken boat being towed to Eden in NSW.

Koa’s withdrawal brought the fleet size down to 106 after Avalanche (broken bowsprit) and Yeah Baby (rudder damage) pulled the pin early on.

Avalanche launched a protest against Llama II, which will be heard on Friday.

It was an eventful start to the 77th edition of the race on Boxing Day, with both Andoo Comanche and Wild Oats doing penalty turns within the opening 20 minutes.