Amanda Nunes (20-4) heads into her latest UFC  title fight against Megan Anderson (11-4) widely acclaimed as the greatest female MMA fighter of all time.

But former UFC fighter Mark Weir believes the Brazilian should be in the conversation for greatest active fighter – across the men’s and women’s competition.

“I remember Ronda Rousey. I used to run down and watch her fight. And Nunes has taken over that mantle and sits on that throne. What she did against Cris Cyborg… Cyborg was taking everybody out, but she made Cyborg look like a beginner,” Weir told Sky Sports this week.

“I know at my gym, when she’s fighting, everybody talks about her. She’s made her mark. All the guys, not just the women, are all looking forward to it. So, to me, she puts my butt on the seat and I put her on the same pedestal as the great men’s champions like Usman and Adesanya.

“I think she’s so rounded she could take it to the level like Anderson Silva and Chuck Liddell, be the fighter all women aspire to be.” Nunes’ credentials to be considered in the pantheon of greats are clear on paper. She’s only the third fighter in UFC history to hold two titles simultaneously after Conor McGregor and Daniel Cormier. She’s the first UFC fighter to defend two titles – bantamweight and featherweight – while actively holding them.

Nunes’ list of vanquished rivals also reads like a ‘who’s who’ of the sport – Rousey, Cyborg, Holly Holm and Miesha Tate have all tried and failed to go the distance with the 32-year-old from Pojuca, who fights out of Florida. And Weir maintains it is the style of the wins and the domination of two divisions, rather than records, that’s cemented Nunes’ legend status.

“Her power is unreal. When you go up a weight, you always think it will be a disadvantage, but she carried it over and was no different. And she can grapple, as well. It’s not like she’s just won her fights, she’s destroyed her opponents. To me, she’s more perfect than Ronda Rousey because she’s so well rounded.”

Weir points out though that ‘The Lioness’ has had to contend with a novel challenge in the build-up to her upcoming featherweight title defence against Anderson: it’s the first fight since Nunes’ partner, UFC strawweight contender Nina Ansaroff gave birth to their daughter, Raegan Ann. And Weir says you never know how parenthood can affect fighters.

“There’s no way she’s going to leave all the parenting to her partner,” he said. “She’ll be getting up in the night. I read in an interview that they’ve shared the times they get up, feeding and so forth and the routine. But fighters are used to adjusting sleeping patterns when we travel, so I’m sure she can handle it.” 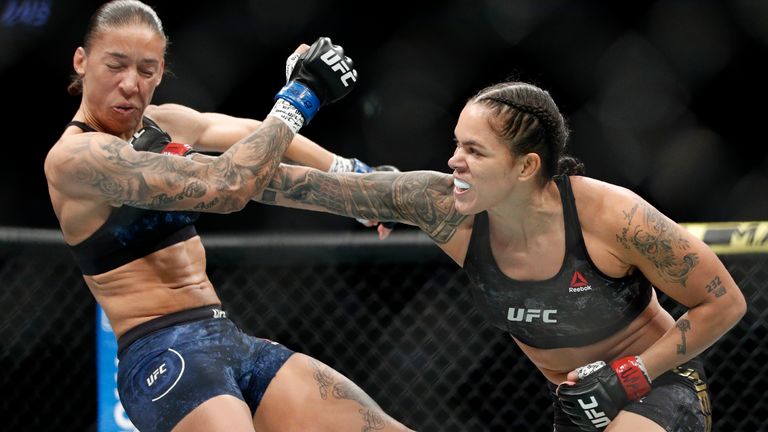 Weir says his key to balancing fatherhood and fighting, for him, was switching into a narrow focus close to the contest – when rest and recovery become key.

“I was totally selfish when the fight was coming up,” he explained. “Every fighter knows the only thing you’re thinking about and dreaming about is winning that fight. Nothing’s more important. And, if it’s not, you’re going to go there and you’re going to get hurt. And I know her (Nunes’) partner is behind her one hundred percent.”

“I think it will be a knockout, possibly a submission, but if I had to bet, I’d say knockout (for Nunes),” he predicted. “And probably I think round two, because she’s so in your face. She’ll wear her (Anderson) down. As small as she is, she’ll get inside and she’ll keep hitting her.”