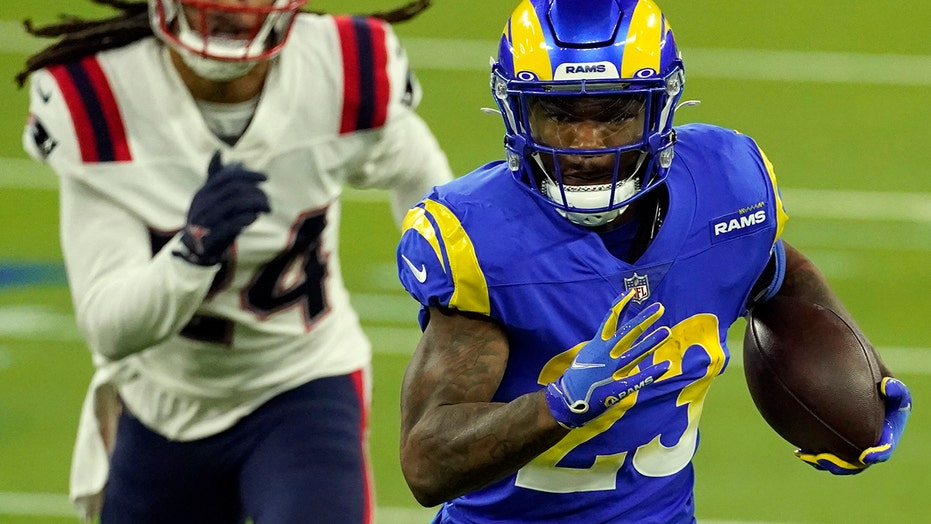 Cam Akers appears ready to provide the rushing brilliance that the Los Angeles Rams have been mostly missing since midway through their Super Bowl season two years ago.

For the moment, coach Sean McVay insists his speedy rookie is still just one part of a ground attack that has shown signs of rejuvenation all season long for the Rams (9-4).

Akers' 171-yard performance in the Rams’ 24-3 thrashing of New England on Thursday night evoked memories of just how effective McVay’s offense was when Todd Gurley was regularly churning out yards by the hundreds in 2017 and 2018.

Gurley's production decline amid murky knee problems slowed the Rams on their way to the Super Bowl, and his ineffectiveness last season ultimately forced the Rams to reboot their running game without their franchise running back.

Put another way: Akers rushed for more yards against the Patriots than Gurley managed in any game last season.

Akers’ speed and elusiveness are undeniable, but McVay said Friday that Akers is still a part of a trio. Darrell Henderson also looked sharp before he was slowed by injuries, and Malcolm Brown is a reliable veteran leader.

“I think what’s important for us is capitalizing on all the different playmakers that we do have,” McVay said. "Certainly Cam did a great job (Thursday) night, but that doesn’t mean that you won’t see opportunities for Darrell and Malcolm (Brown) moving forward, because both of those players have done a lot of really good things. … We're really pleased with Cam, and not surprised."

McVay thought the Rams’ rushing total could have been even bigger, but he got conservative on purpose after LA’s 90-yard scoring drive in the third quarter because of his defense’s dominance. The Rams still won a game with more yards rushing than yards passing for the first time since the 2018 season.

A blowout win over the Patriots before a national television audience is a pretty good way to start a long weekend, and the Rams earned the right to a little satisfaction from their fourth win in five games out of their bye week, even while they realize they've got much more to do to stay atop the NFC West.

Dominating the Pats — even this Brady-free, drastically weakened 2020 version of Bill Belichick's club — felt like a landmark in the Rams' surprisingly strong season.

But veteran defensive tackle Michael Brockers believes it's only part of a process for an aspiring Super Bowl contender.

“I don’t want to say we peaked, because after a peak, you’re going downhill,” said Brockers, who had two sacks. “So we’ll continue just to keep climbing, getting better and staying consistent each and every week.”

The offense was undeniably inconsistent. The Rams had three lengthy scoring drives, but managed just 65 total yards on their other eight drives. McVay's purposely conservative second-half approach played a part, but the Rams probably need more than 17 offensive points to beat most good teams, even with their dominant defense.

Linebacker Kenny Young had the biggest game of his three-year NFL career, making a 79-yard interception return for a touchdown while leading the Rams with eight tackles and getting a sack. Young hasn't always made major impacts this season despite having a prominent role in LA's thin group of inside linebackers, but he was all over the field against the Patriots.

Jared Goff shares the NFL lead in completions with Ben Roethlisberger (324), but his quarterback rating is down to 23rd in the league (60.6), and his 11th interception was his 15th turnover of the season. Goff is mostly getting the job done in 2020, but brilliant games have been rare.

McVay reported no new injuries Friday after the Rams' second game in five days. He always credits the team's remarkable durability throughout his tenure to Reggie Scott, the team's senior director of sports medicine and performance.

42 — The Rams' total sacks this season after dropping Cam Newton and Jarrett Stidham six times. That's the second-most in the NFL for now, and it's more than the Rams managed in their entire 2018 regular season, which ended in the Super Bowl. Aaron Donald had 1 1/2 sacks to take the overall NFL lead with 12 1/2 this season, and he applied seven pressures on just 23 rushes, according to Next Gen Stats.

After a long weekend off, the Rams prepare to host the New York Jets next Sunday, Dec. 20. McVay has already been talking up the winless club and its quarterback, former USC star Sam Darnold.