After nearly two decades appearing alongside one another on billboards and in the record books, Serena Williams and Roger Federer faced one each across a tennis court for the first time on Tuesday at the Hopman Cup.

The incandescent stars, now both 37, finally aligned for the first time in a mixed doubles match between the United States and Switzerland in Perth. 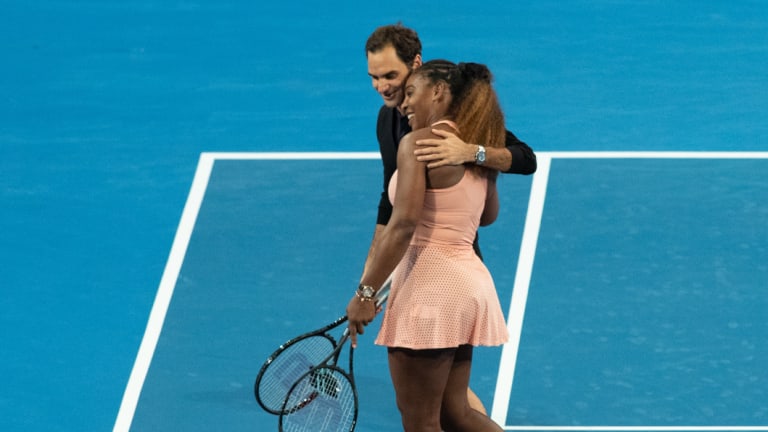 Competitive spirit: Both players relished the opportunity to meet in an official match.Credit:AAP

On the opening point, Williams pulled Federer wide to his forehand side with a sharply angled volley, then sent a smash toward the opposite corner that he could not reach in time to send back. Long exchanges between the two proved few, however, with each using their serve to effectively neutralise the other.

It did not seem to matter to the crowd of 14,064 in Perth Arena, the highest single-session attendance in the event's 31-year history, and Williams and Federer clearly delighted in the chance to hit the ball around with each other a couple of weeks before more serious play at the Australian Open.

"It was a great experience," Williams said as she joined Federer on court after the match. "I'm kind of sad it's over. It was just warming up."

Federer and his partner, Belinda Bencic, beat Williams and Frances Tiafoe in an abbreviated format match by the score of 4-2, 4-3 (5-3) in 46 minutes.

Despite the initial, promising exchange in the first set, Williams and Federer seemed to settle into more conservative play; in the entire first set, neither Federer nor Williams succeeded in making a single return off the other's serve.

There were, technically, two other people on the court as well. Bencic hit a pivotal return winner off Tiafoe's serve that helped Switzerland take the lead in the first set. But they will barely rate a mention in any copy related to this meeting of two of the sport's all-time greats.

Federer and Williams both gained more of a foothold on the other's serve in the second set, which was highlighted by a six-shot exchange of powerful cross-court groundstrokes between the two before Federer won the point by ripping a forehand toward Tiafoe.

Williams and Federer afterward sized each other up.

"I can't read yours either," Williams interjected, laughing.

"We have the same qualities, you know?" Federer said.

"Yours is a bit better," he added, provoking a good-natured eye roll from Williams.

"It was great, great fun," Federer added. "She's a great champion — you see how focused and determined she is — and I love that about her."

"I mean, the guy is great, he's the greatest of all-time, to be honest," Williams said, drawing applause from the crowd.

"He has a killer serve. Literally, you can't read it, and there's a reason why he's the greatest, because you can't be that great and not have an awesome weapon like that serve."

That Williams' serve would prove daunting to one of the best men's players is no surprise, especially one day after she had sent a clean ace past the reach of 193cm Stefanos Tsitsipas in a mixed doubles match.

"Like I had any chance of returning that one," Tsitsipas wrote on Twitter, replying to an image of the serve spinning well beyond his reach.

After Williams insisted that they swap racquets during an on-court selfie, they walked back to their seats with their arms wrapped around one another, and Federer said his racquet was hers to keep.

As she carried it into the players' area of Perth Arena alongside Tiafoe, Williams stared at the racquet with visible wonderment, showing it to her partner and letting him hold it briefly.

"I was so excited," Williams told reporters. "Literally, it was the match of my career. I don't know, just playing someone so great, and someone that you admire so much — and a match that actually means something. It's not often that that happens."

The mixed doubles win gave the tie to Switzerland, who are the defending champions after Federer and Bencic won the competition last year. Williams expressed mild disappointment at her play, especially considering her superior doubles pedigree of 16 grand slam titles to Federer's none.

"I'm the one that won those doubles grand slams, but it didn't look like it," she said.

Williams said she had been tempted to bring her 16-month old daughter, Olympia, to the match. She ultimately decided against that, settling for having an unforgettable story to tell her.

"Men and women's tennis just don't compete against each other," she said. "So it's just really great and special to go against the greatest of all time."

After this summit of superstars, Federer could tell his children the same thing.