Cricket Australia wants the Adelaide Test to become a permanent day-night fixture and hopes India endorses the pink-ball concept when they next tour.

Officials were left concerned after a modest 23,802 turned out for the opening day of the series in Adelaide on Thursday, the lowest day-one attendance since the venue was redeveloped in 2013. 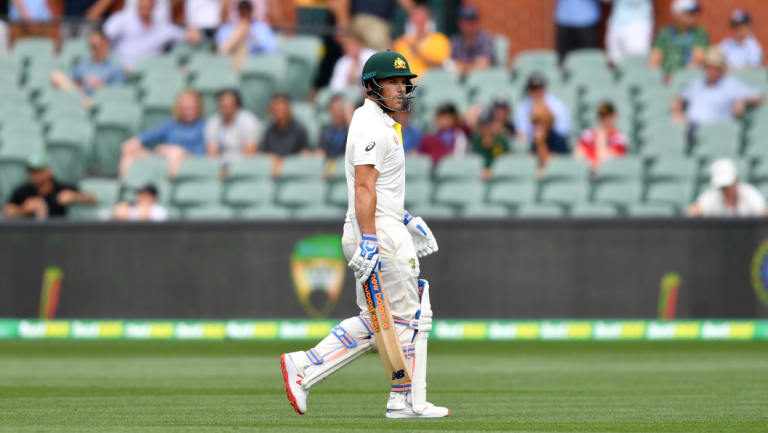 Aaron Finch walks off the Adelaide Oval, which is a day-only Test this year.Credit:AAP

What has CA stumped is the lack of overall support – so far – from the strong Indian contingent living in Perth.

The day-night concept in Adelaide has been a success in terms of attendance and broadcast ratings although players have yet to fully embrace the concept because of the heavily lacquered pink ball.

There were 55,000 for day one of the Ashes opener in Adelaide last year, 32,255 on the corresponding day against South Africa a year earlier and 47,441 for the first year against New Zealand.

Ashes attendance are typically robust because of the presence of the Barmy Army and English tourists but that Thursday was well down on when the Proteas and Black Caps were in town is an issue.

Thursday's attendance was also lower than the 25,619 who fronted against India here four years ago.

"No doubt we have lost that particular group of fans [who like day-night Tests] for this Test. We are looking forward to the day-night Test coming back to Adelaide," Roberts said.

Roberts said he wanted the day-night Test to be staged in Adelaide on a permanent basis.

"You look at the way fans have embraced it. I am an advocate for day-night Test cricket but it doesn't matter what I think, it's what the fans think," he said.

He said he hoped the BCCI would agree to a day-night for the next tour here.

"Let's hope so. We will take it one step at a time. We embrace that they have a different view of this Test match but we hope in time, with the sentiment from fans, we can have a day-night Test," he said.

India continues to reject playing with a pink ball, whether that be at home or on the road.

As Australia had played four Tests under lights, the BCCI felt the home side would have had an unfair advantage this summer.

Under current ICC rules, the touring team can deny the home board's fixture requests, but that may change from next year when the new future tours program begins.

Roberts said he had been "proud" of the manner in which the Australian team had conducted itself in the field, having "walked a tight-rope" over its behaviour and culture since the disastrous South African tour.