LYON, France — The best women’s soccer player in the world was strolling down a cobbled street on Monday afternoon when a man in a white apron emerged from a seafood restaurant and peered incredulously down the sidewalk.

“Is it really her?” he said, tilting his head.

The player, Ada Hegerberg, who had just enjoyed a coffee at a quiet local cafe, laughed and waved to the smiling stranger. Within moments, the man was holding his cellphone in front of their faces.

“The women’s Ballon d’Or, the first one, is with who?” he said, gesturing animatedly toward the phone as he recorded a video. “She’s with me!”

Life has changed a bit for Hegerberg in the past week.

To be sure, it has been some time since Hegerberg, 23, established herself as one of the brightest talents in the women’s game, a striker capable of producing cartoonish goal-scoring figures — 120 goals through 95 games since 2014 — for the premier women’s club team in Europe, France’s Olympique Lyon.

But as Hegerberg has found over the past week, winning the Ballon d’Or — a prize recognizing the world’s best player, presented at a star-studded, televised ceremony in Paris that until this year had been awarded to men — can catapult things to a dizzying new level.

“I knew this would be the biggest thing that happened in my life,” Hegerberg said about the award, “but I didn’t know how huge it was until I went on that stage.”

It was what happened on that stage that thrust Hegerberg, through no fault of her own, into the broader public consciousness: a flip remark from the French D.J. serving as one of the ceremony’s hosts (“Do you know how to twerk?”); the immediate storm of viral outrage the question generated; the subsequent wave of support from friends and strangers; the dozens of requests for interviews.

“This whole week,” Hegerberg said Monday, “has been crazy.”

She joked that this new existence, all of a week old, felt like a distant reality from her beginnings in Sunndal, Norway, a town of about 7,000 people. And yet it might have appeared preordained, too, given that Hegerberg’s childhood home essentially functioned as an incubator for lethal soccer talent.

Her parents, Stein Erik Hegerberg and Gerd Stolsmo, both played and coached soccer for Norwegian clubs. Ada’s older sister, Andrine, 25, is a midfielder for Paris St.-Germain. Her older brother, Silas, 32, played the game in his youth.

At home, Hegerberg’s parents instituted various rules — though they were meant to embolden their children, not constrict them.

For example, they never drove their children to soccer practice. “They had to go to training by running or by bike,” Stein Erik Hegerberg said. “If it’s not important for you, then you won’t go.”

The Hegerberg children were encouraged to make their own choices, and to learn from their own mistakes. And, above all, they were told to always, always remain humble.

These values imbued in Ada Hegerberg a clearheaded determination about her beliefs, she said. Now, she wants to use her growing platform to raise awareness, and the level of respect, for the women’s game. Among other causes, she has been pushing for more soccer fields to be built in Norway.

“I know I have a voice, and I want to use that voice as much as I can to bring things forward,” she said.

Those values, at the same time, will keep her away from the biggest platform of all: the Women’s World Cup next summer in France. Last year, Hegerberg quit the Norwegian team after determining the organization was not — in her view — doing enough to support the women’s program.

She does not enjoy rehashing her specific grievances anymore, but they had built up over time, she said, until the situation became “unbearable.” Some, including Norway’s federation, have described the move as temporary, a “break” from the team. But Hegerberg insists it is permanent.

The notion that she might rejoin the team for the World Cup next summer now that she has been honored as the world’s best player, she said, was out of the question.

“I was quite clear with them about what I thought needed to be better,” she said. “I gave them the reasons. I wish my national team all the best. I love my country. I wish I could play for them. In this case, I had to move on.”

Hegerberg’s decision to quit the national team kept her up for many sleepless nights, she said. But after she made the announcement, she said she felt a huge weight lifted from her shoulders. The new peace of mind, she mused, has played a role in her ascent as a player.

Last month, a full two weeks before the Ballon d’Or ceremony, a media officer at Olympique Lyon pulled her into a conference room at the team’s training center and asked her if she could keep a secret: France Football, the magazine that has presented the award since 1956, had added a women’s award this year, the media officer said, and she would be the first recipient.

Hegerberg began to cry. Then she ran to her car and called her fiancé, Thomas Rogne, a defender for the Polish club Lech Poznan.

Hegerberg glowed as she recounted the ceremony, saying she was most happy that her entire family could share the moment — and the party afterward.

“It was a tremendous night,” Stein Erik Hegerberg said. “It was joy, harmony, humor, everything.”

Online, though, the ceremony that had introduced Hegerberg to millions had created a much different reaction. 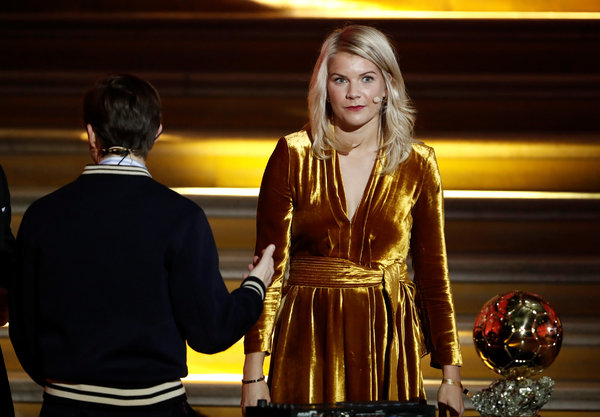 In a moment that would inspire cringes around the world, the co-host of the show, Martin Solveig, had greeted Hegerberg by asking if she knew how to twerk. Hegerberg replied with a curt “no” and turned away — a gesture many perceived as one of barely concealed disgust. Solveig’s remark, and Hegerberg’s response, began to circulate on social media almost immediately, drawing immediate and widespread condemnation from people inside the sport and out who felt it had undercut a big moment and, more important, would never have happened to a men’s player.

Reflecting on the issue on Monday, Hegerberg said “things blew out of hand.”

“In that situation, I didn’t take it bad, at all,” Hegerberg said, repeating comments she made to reporters on the night of the ceremony. “I just said ‘no’ and turned because obviously I didn’t want to twerk in front of millions of people. So it was kind of like an ironic ‘no,’ and I had a laugh because I was there doing the Ballon d’Or, and that was the only thing I thought about.”

She said there were more important issues in women’s sports on which to focus her energy, but she said she understood those who felt discomfort about the remark, including the seafood restaurant employee who stopped her on the street on Monday.

“On the stage when he said ‘Let’s twerk,’ I wanted to say, ‘Are you serious or what?’ ” the man said on the sidewalk.

“The people took it worse than me,” Hegerberg told him.

More eyes are on Hegerberg these days. And things, she said, are not always as they seem.

Upon returning to Lyon after the Ballon d’Or gala, for example, she showed up at practice the next day driving a gleaming S.U.V. The car turned some heads and drew some ribbing from teammates, who thought she had treated herself to a new car to celebrate her award. But the vehicle, she said, was merely a loaner from the club; hers was at the mechanic for repairs.

Days later, Hegerberg resumed her season with Olympique Lyon. Less than a week after she made headlines while receiving one of world soccer’s biggest awards, she was on a bus with her teammates, riding eight hours each way for a road game against Soyaux.

“If you think I was flying the last couple of days,” she said, smiling, “I went quickly down to earth again.”

Andrew Keh is an international correspondent, covering sports from Berlin. He has previously covered Major League Baseball and the N.B.A. and has reported from the World Cup and the Olympics. @andrewkeh