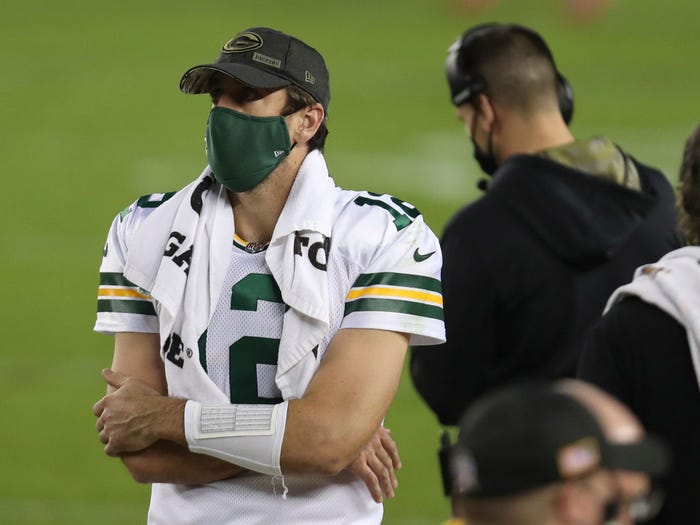 Aaron Rodgers raised a few complaints about the NFL's COVID-19 protocols while appearing as a guest on "The Pat McAfee Show" on Tuesday.

"Obviously, proponents of all of that say it's necessary to get us to the finish line, to the end of the season. I think there's a lot of questions about, you know, are we doing all this based on science? And it's all necessary?" Rodgers said. "There's some interesting conversations to be had down the line about all that."

Rodgers acknowledged that the league had several positive cases over the past few days and was not arguing for an easing of protocols but rather noting that some of the rules didn't line up.

"I'm not saying we have to lighten anything up. I'm just saying, what is this based on? I just think there's some double standards," Rodgers said.

"You can dap up a guy after a game, but you can't eat at the same lunch table as a teammate,'' Rodgers said.

"You can go down to practice and hit each other and be in close contact, but you have to have Plexiglass between you and the guy next to you in the locker room. I just think some of those things, to me, really don't add up."

While Rodgers' frustrations are understandable, don't expect change from the NFL any time soon. With bye weeks now largely over, the league is left with very little wiggle room should it need to move more games due to a team suffering a COVID-19 outbreak.