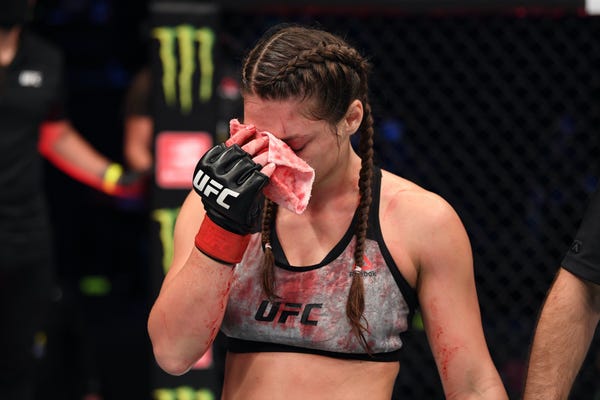 A UFC fighter has been slapped with a six-month medical suspension after suffering a nose so bloodied a doctor called off her fight.

Lilian Jojua fought in the Fight Island finale on Saturday, October 24 in Abu Dhabi, but only competed for one round before the Octagonside doctor had seen enough.

Post-fight photographs showed Jojua stitched-up and with a blood-splattered uniform following the flyweight match at the behind-closed-doors Flash Forum.

MMA Fighting reported Tuesday that Jojua will be sidelined for half a year.

However, should she get a medical clearance from an ear, nose, and throat doctor, then it would be reduced to a 60-day suspension with a mandatory 45 days on the sidelines with no contact training.

UFC 254 was headlined by the lightweight championship match between Khabib Nurmagomedov and Justin Gaethje, which the champion, Nurmagomedov, won by second-round submission.

Both 155-pounders have been ordered to take seven days' rest.

Nurmagomedov, though, has retired and said he will never again compete in professional fighting.