He spent 15 months crisscrossing the country in search of water to train in, landing, at one point, in the actor David Duchovny’s backyard pool.

But for the Paralympic swimmer Rudy Garcia-Tolson, the road to the Tokyo Games ended up even more twisted. There was a last-minute dash to Brazil to fulfill one aspect of the sport’s qualifying process and a last-ditch chance at the selection meet to make the time needed to join the team.

“After all the ups and downs of the last year, it all came down to my last race,” Garcia-Tolson said this week.

This is not where Garcia-Tolson, 32, thought he would be a few years ago. In 2016, after the Rio Games, where he won his fifth medal at his fourth Paralympics, he thought he was done. He retired at 28 and moved to New York City to begin a career as a coach.

But then the coronavirus pandemic forced organizers in Japan to delay the Tokyo Games for a year. The decision came just as Garcia-Tolson was getting the itch to compete again. The delay caused serious upheaval to most aspiring Paralympians, but it presented Garcia-Tolson with an opportunity. In an instant, he had a year to get his body back into elite condition.

There were major obstacles though. This was spring 2020: All pools in New York City were closed, and the open water was too cold for swimming. So Garcia-Tolson packed up his apartment, loaded his belongings into a rental car and drove across the country to his childhood home in Southern California.

But public pools there were closed, too. So he took his surfboard and headed to the beach, figuring he would get in some cardio and strength work in the ocean. It was better than nothing.

Then came a stroke of good fortune. Duchovny, who is an amateur triathlete, heard that Garcia-Tolson needed a place to train.

Garcia-Tolson was born with multiple birth defects and had both legs amputated by age 5. Duchovny has a training pool behind his Malibu home. He told Garcia-Tolson he could use it whenever he wanted.

That gave Garcia-Tolson his start. Five days a week, he drove more than 100 miles round-trip to Duchovny’s house. 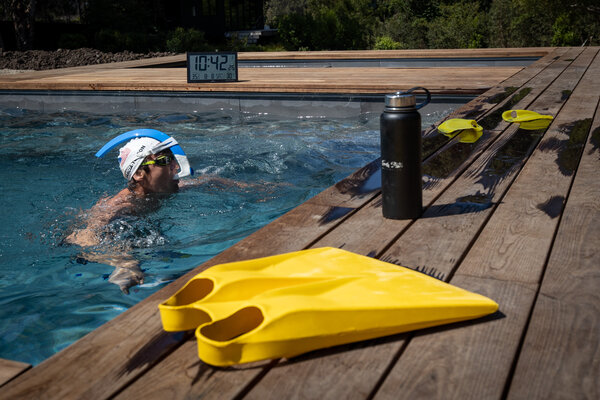 In the fall, he moved to Colorado Springs, where he lived and trained years earlier, searching for a chance to train at altitude and to be close to the U.S. Olympic and Paralympic Training Center. After four years away from competition, he was not going to have access to the facilities there, but he wanted the national team’s leaders to know he was serious about this comeback.

“He was a wild card,” said Erin Popovich, the director of para-swimming for the U.S. team. “We hadn’t seen him in four or five years.”