Of the nine women left in the singles draw, only two have played in a Grand Slam final, and neither will be featured in today’s matches. The guarantee of a new finalist is exciting, especially with two qualifiers, Nadia Podoroska and Martina Trevisan, reaching their first Grand Slam quarterfinals. The men’s side features a few more established names but has plenty of uncertainty around who can advance through the difficult draw.

Here are some matches to keep an eye on.

Because of the number of matches cycling through courts, the times for individual matchups are at best a guess and are certain to fluctuate based on the times at which earlier play is completed. All times are Eastern.

Nadal, a 12-time French Open champion, is excellent on clay. Through the first four rounds, he has dropped only 23 games, bulldozing young prospects out of his path. With his topspin-heavy groundstrokes, Nadal drives his opponents into the corners, far behind the baseline. If they somehow manage to stay in the point, Nadal comes in slightly shorter and hits a drop shot that is all but impossible to chase down, even if the opponent were to get a head start. Though Nadal lost to Diego Schwartzman in the quarterfinals of the Italian Open on clay a few weeks ago, it seems that no one can challenge Nadal much now that he’s back at Roland Garros. 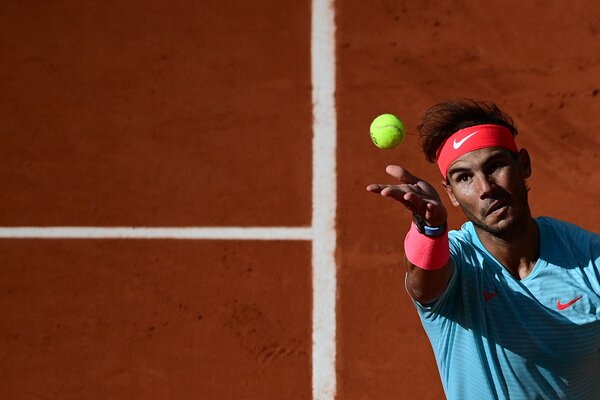 Sinner, a 19-year-old ranked 75th on the ATP Tour, has reached his first Grand Slam quarterfinal at his first career French Open and just his fourth Grand Slam main draw. Sinner upset the 11th seed, David Goffin, in the first round and beat the sixth seed, Alexander Zverev, in the round of 16. Sinner has an aggressive style of play, using his incredibly flat forehand to hit pinpoint shots into the corners.

It’s surprising to watch such a young player dominate points, particularly on clay, where defensive players generally have an advantage. But, in a match against Nadal, it’s unlikely that Sinner will have the freedom to control many points. How he deals with that pressure will be the greatest indicator of his future successes on the tour.

Svitolina, the highest-ranked player left in the women’s draw as the third seed, reached the semifinals at Wimbledon and the United States Open in 2019, but hasn’t been past the quarterfinals at the French Open in her career. Although Svitolina seemed to struggle to find her pace in the first two rounds, she sailed past Ekaterina Alexandrova, the 27th seed, and Caroline Garcia in the third and fourth rounds. Svitolina’s powerful baseline game is not usually suited to clay courts, but the surface at the French Open seems to be playing a bit flatter than in previous years, much to her advantage.

The only other time Podoroska played in the main draw of a major tournament, she lost in the first round at the 2016 U.S. Open. Now, having played her way through the qualifying round, she has pushed through to the quarterfinals, upsetting the 23rd seed, Yulia Putintseva, along the way.

While Svitolina will be the overwhelming favorite, Podoroska may have less pressure. That may allow her to play easily and freely and to press Svitolina to draw out unforced errors from the heavy hitter.

Thiem, the third seed, is among the favorites to win the French Open. Having lost to Nadal in the French final in both 2018 and 2019, Thiem finally won his first Grand Slam title at the 2020 U.S. Open. With that added confidence, he skated through the first three rounds in Paris, but then needed five sets to push past Hugo Gaston, a wild card. Thiem did not play any tournaments on clay before the French Open, and it’s possible that now, faced with more clay-court specialists late in the tournament, his lack of warm-up events could cause some problems.

Schwartzman, standing 5 feet 7 inches, is one of the shortest men on tour, and by that virtue is a perennial underdog. But his reading of the game and opponents is world class. Through to his fourth Grand Slam quarterfinal, Schwartzman has yet to drop a set at this year’s French Open, a difficult accomplishment for any major tournament that uses the five-set format, especially on a surface that can let players dig into defensive positions and wear down opponents.

With Schwartzman’s confidence high after an upset of Nadal and a finals appearance at the Italian Open, he could have the self-belief to beat the high-flying Thiem for his first semifinals appearance.

Swiatek, 19, played a near-perfect match to upset the top seed, Simona Halep, in just 68 minutes in the round of 16. Her win came one year after Halep had dispatched Swiatek at the same stage of the French Open in less than an hour, a stunning reversal, especially considering how dominant Halep had looked in the past few weeks.

Swiatek, in her first Grand Slam quarterfinal, has the eyes of the tennis world well on her. With powerful groundstrokes and a tendency to chase down even the lightest drop shots, Swiatek, when she is on her game, seems nearly impossible to beat.

Trevisan, a qualifier out of Italy, has caused upset after upset in each round of the French Open. After knocking out her countrywoman Camila Giorgi, she beat Coco Gauff, the 20th-seeded Maria Sakkari and the fifth-seeded Kiki Bertens. Trevisan is a clay specialist, having reached the finals only at clay-court events on the lower rungs of the professional tours. There may not be much pressure on her as she faces Swiatek on Tuesday.