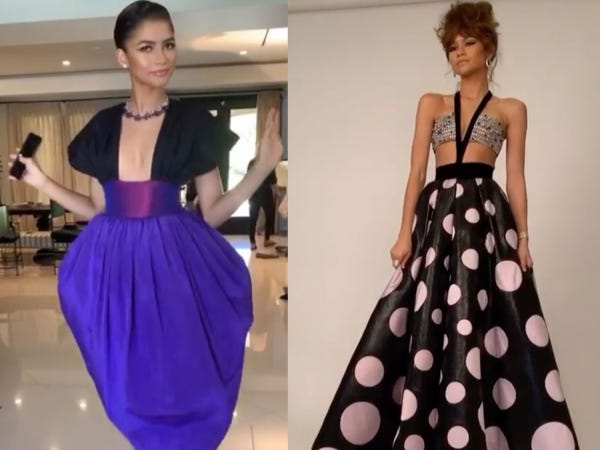 Zendaya proved that you don't need a red carpet to be a style queen at the 2020 Emmys on Sunday.

The "Euphoria" star, who took home her first trophy for outstanding lead actress in a drama series, sported two looks for the virtual ceremony – and both of them were showstoppers.

Zendaya changed into a custom Giorgio Armani Prive gown to collect her trophy.

The stunning dress featured a bralette that was covered in sparkling jewels, along with a polka-dot skirt.

Zendaya completely transformed her hair and makeup for the second look, channeling Old Hollywood glamour with her feathered updo and dramatic winged eyeliner.

Law Roach, Zendaya's longtime stylist, posted a clip of the "Euphoria" star twirling in the dress to celebrate the win just moments after her name was announced.

"She's a winner baby," he wrote in the caption, borrowing a beloved catchphrase from "RuPaul's Drag Race."

Earlier in the night, Zendaya sported a Christopher John Rogers ensemble that featured a black top with a plunging neckline and a purple taffeta skirt.

She wore her hair back in a simple updo, pairing the look with glittering Bulgari jewels and Christian Louboutin pumps that were embellished with crystal hearts on the front.

The actress had hinted that there was more glam to come, writing "And so it begins … Look 1," on her Instagram story.

She also posted another "sneak peek" on her story with a close-up of more glittering jewels — later revealed to be the bralette from her Armani gown.

Representatives for Law Roach, Armani, and Christopher John Rogers did not immediately respond to Insider's requests for comment.