Yes, you can get a Hollywood hunk in your bedroom: It’s easy thanks to the latest trend for celebrity sleep stories. But who’ll give you the sweetest dreams?

Vivid nightmares and crippling insomnia are rife as we battle through our third national lockdown.

Doctors report a surge in patients struggling to get a good night’s rest and even people like me, who usually sleep like a baby, are having problems.

My Fitbit tells me that I now average a pitiful four hours a night, half of what I normally have.

The best part of a year with little social interaction has also left me feeling uncharacteristically anxious and jittery during the day.

If only I had a big, hunky man to read to me in soothing tones, or maybe guide me through some mindful meditation. And what if that man just so happened to be a megastar with the body of a Greek god? 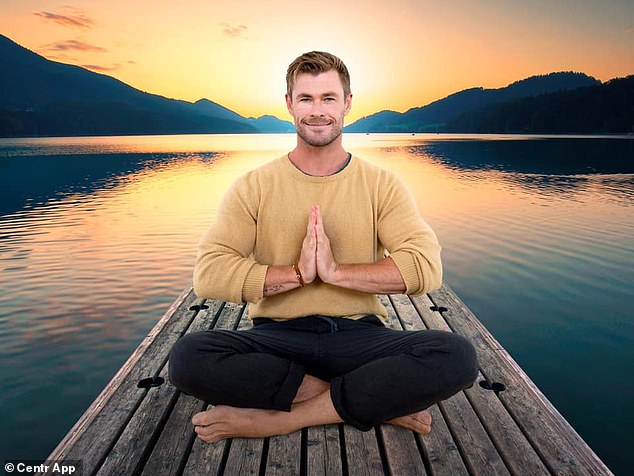 Claudia Connell has been listening to celebrities sleep stories to help her sleep better, including Chris Hemsworth’s (pictured) which you can find on Centr

Apps promoting mindful meditation and relaxation are more popular than ever, and some have cleverly recruited celebrities to help us switch off, calm down and nod off.

From chilling out with Hollywood heartthrob Chris Hemsworth to enjoying a bedtime story with Harry Styles, here’s what happened when I invited some of the biggest male stars into my bedroom . . .

SOOTHED TO SLEEP BY A SUPERHERO

Imagine waking up to an email from Chris Hemsworth in your inbox telling you that the pair of you are going on a journey together. That’s what happens when you sign up to Centr, the lifestyle app he launched a year ago.

As well as workouts and diet advice, there are also meditations and stories led by the actor most famous for playing Thor in the Marvel franchise movies.

His eight-minute guided meditation on kindness is intended for children but my need is greater and, besides, they should be focusing on their schooling.

In his low, Aussie drawl, Chris tells me to relax from my little toes all the way to the top of my head. I must then feel the breath go into my body ‘so your tummy blows up like a balloon’. After months of over- indulging, my tummy is permanently like a balloon. 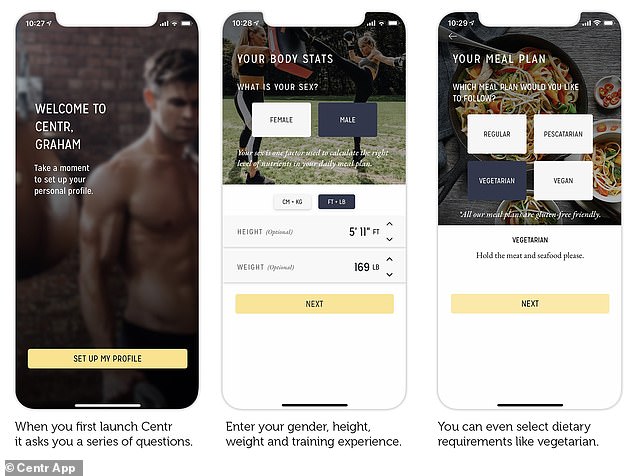 Chris launched the lifestyle app a year ago, where you can track your body stats and access meal plans as well as his sleep story 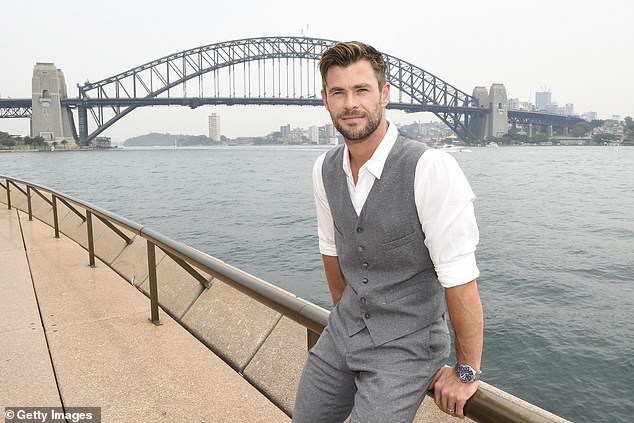 In his sleep story, Chris (pictured) tells the listener to relax from their toes to the top of their head before telling them to think of something happy, revealing he is thinking about surfing

Chris tells me to think of something that makes me happy and reveals he is thinking about surfing. Suddenly, I am also thinking about Chris surfing and, yes, that’s making me happy, too.

He wants me to imagine the biggest, warmest hug. He doesn’t say to imagine that he’s the one giving it, that’s just me using my imagination.

‘May I be happy. May I be safe. May I be strong and healthy,’ I chant as instructed.

‘Do you think you could send those happy feelings to everyone in your town? Or even the whole world? I think you can,’ he says.

VERDICT: It’s impossible not to picture Chris dressed as Thor while doing his meditations. I should be visualising forests and beaches, but all I can do is picture him in his armour, brandishing that huge hammer.

He does have a relaxing voice and doesn’t take himself too seriously. In truth, I felt more hot and bothered than calm and relaxed. 3/5

A SPECIAL BRAND OF PSYCHOBABBLE 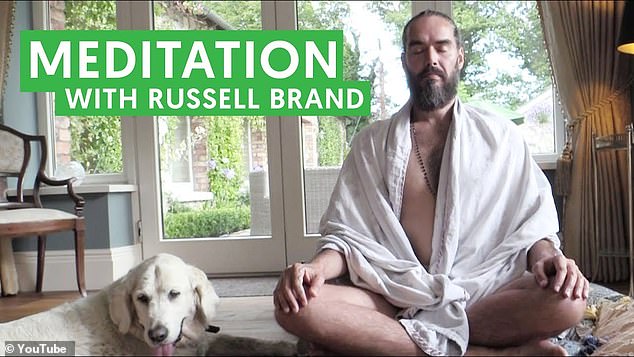 Russell Brand has reinvented himself as something of a New Age guru and has a 15-minute guided meditation for anxiety available for free on his YouTube channel, which boasts 2.8 million subscribers

Meditation For Sleep by Russell Brand, free at youtube.com/user/russellbrand

Once a womanising comedian, Russell Brand has now reinvented himself as something of a New Age guru.

His YouTube channel has 2.8 million subscribers and it’s here that I follow his 15-minute guided meditation for anxiety.

Dressed in an extremely low-cut T-shirt that shows his hairy chest and a string of beads, he tells me to relax and ‘don’t worry if you’ve got too much phlegm in your mouth’. I’m to breathe through my nose and sit up straight.

He says that in meditation we don’t consider thoughts to be good or bad but must remind ourselves that we are more than a vessel for thought.

He tells me to lengthen my exhalation and see if answers come to mind about why I’m anxious. 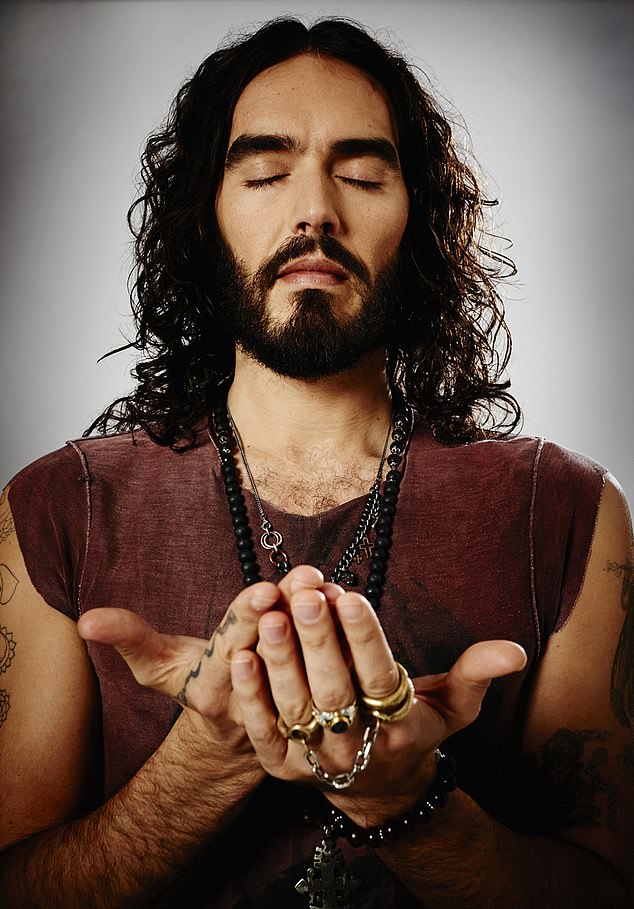 ‘Feel the entirety of your body, inner and outer. Acknowledge that within the apparent solidity of the body is more space than matter and consider that beyond the apparent boundary of your physical form are expressions of your energy, pheromonally for example, and in terms of magnetic omission.’

I haven’t got a clue what he’s talking about, but maybe it doesn’t matter.

I am quite enjoying just relaxing and focusing on my breath for a few minutes, and mixed in with the psychobabble is sound and reassuring advice.

‘All anxiety and fear is temporary,’ says Russell. ‘You can live free from fear and deserve to.’ Amen.

VERDICT: He may look like he’s entering a Jesus lookalike competition and a thick Essex accent isn’t one you’ll typically find in meditations but it’s short, thought-provoking and I did feel more chilled. 4/5

THE MASTER OF MELLOW 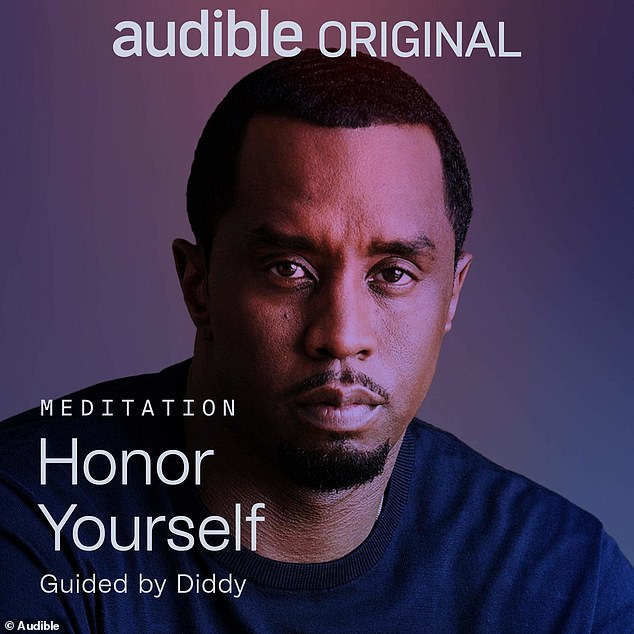 Diddy, formerly known as Puff Daddy, has a 25-minute long sleep story on Amazon’s app Audible, where he says he will help you ‘slow down and drift off into the peaceful restorative sleep that you deserve’

Honor Yourself by Diddy, free, audible.co.uk

The Amazon-owned app features a host of well-known names reading classic books. I want to relax and switch off, not focus on a story, so I decide to go with a meditation led by the singer formerly known as Puff Daddy. It’s 25 minutes long and Diddy says he is going to help me ‘slow down and drift off into the peaceful restorative sleep that you deserve’.

Wearing my new M&S pyjamas, I settle down for the night. Diddy tells me to picture myself in a state of deep sleep and then give myself ‘permission’ to sleep. Permission granted.

He tells me to stretch out under the covers and then adds ‘that’s cool’. And Diddy is cool. No woo-woo language from him, just straight talking.

‘I want to let you know there’s gonna be a change of pace but we’re gonna embrace it,’ he says.

When I breathe he wants me to inhale positivity and exhale negative energy and stress.

‘Honouring sleep is one of the most important ways we can honour ourselves. It will fill your hustle, your internal drive.’

He wants me to understand that my bed is my sanctuary and I need to give gratitude for it. I must say: ‘How lucky am I to have a bed that feels this good.’ My bed is 15 years old and urgently needs an upgrade but I go with it.

‘I deserve this time to rest’ must be my mantra as I picture the faces of my friends, loved ones and supporters. ‘You deserve some good vibes, you’re too hard on yourself.’ You’re right Diddy, I am.

‘Your body is heavy, at one with your bed. Now it’s like a cloud and you’re drifting towards sleep,’ is how he ends the surprisingly calming meditation.

VERDICT: Who’d have thought Diddy would be such a wise owl? His velvety voice is soothing and I did sleep well. I’m not sure if my hustle and internal drive are filled, but he is the master of mellow. 4/5 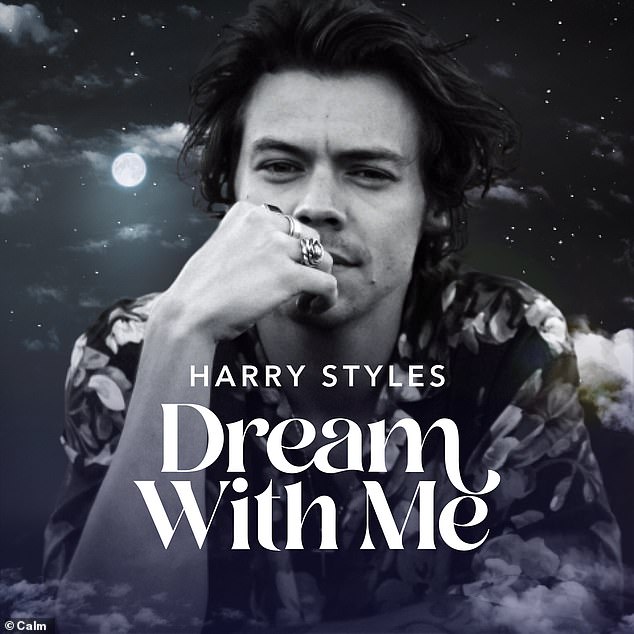 You can listen to Harry Styles while you fall asleep on Calm, which was launched in 2012, and features a 40-minute long story from Harry, read to the accompaniment of sweeping orchestral music

Dream With Me by Harry Styles, free seven-day trial, then £28.99 a year, calm.com

Launched in 2012, Calm is the No 1 app for sleep, relaxation and meditation. We all know that Harry has an appreciation for the older woman, so why not get him to virtually tuck me in with a soothing story?

It is 40 minutes long and read to the accompaniment of sweeping orchestral music.

‘A sleep story, just for you. Thank you for choosing me to help you,’ says Harry slowly and softly. ‘Tonight we are going to think about anything you like . . . We are heading somewhere special.’

It soon becomes clear that it’s just a collection of awful poetry, like the sort I would have written when I was 12.

‘Travel to moonlit valleys blanketed with heather, the kind of landscape you and I could dream about for ever.’

Then: ‘Gentle scent of cedar wood is floating on the breeze, a gift from Mother Nature and her nearby cedar trees.’

But the rhyming really peaks when Harry says: ‘We’re marvelling at infinity so allow yourself to wander to a peaceful new vicinity.’ By this stage, I am cackling like an old witch instead of drifting off to sleep.

One minute we’re on a beach, the next we’re in a forest, then a log cabin, followed by a meadow. Never mind relaxing, I feel shattered and — I hate to say it, Harry — underwhelmed.

I never thought I’d be snuggled up in a mountain hideaway with Harry Styles . . . and bored.

VERDICT: The app is slick and easy to use with hundreds of stories and meditations, it’s just a shame that Harry wasn’t as much fun to sleep with as I’d hoped. 1/5

TUNES TO TUNE OUT TO 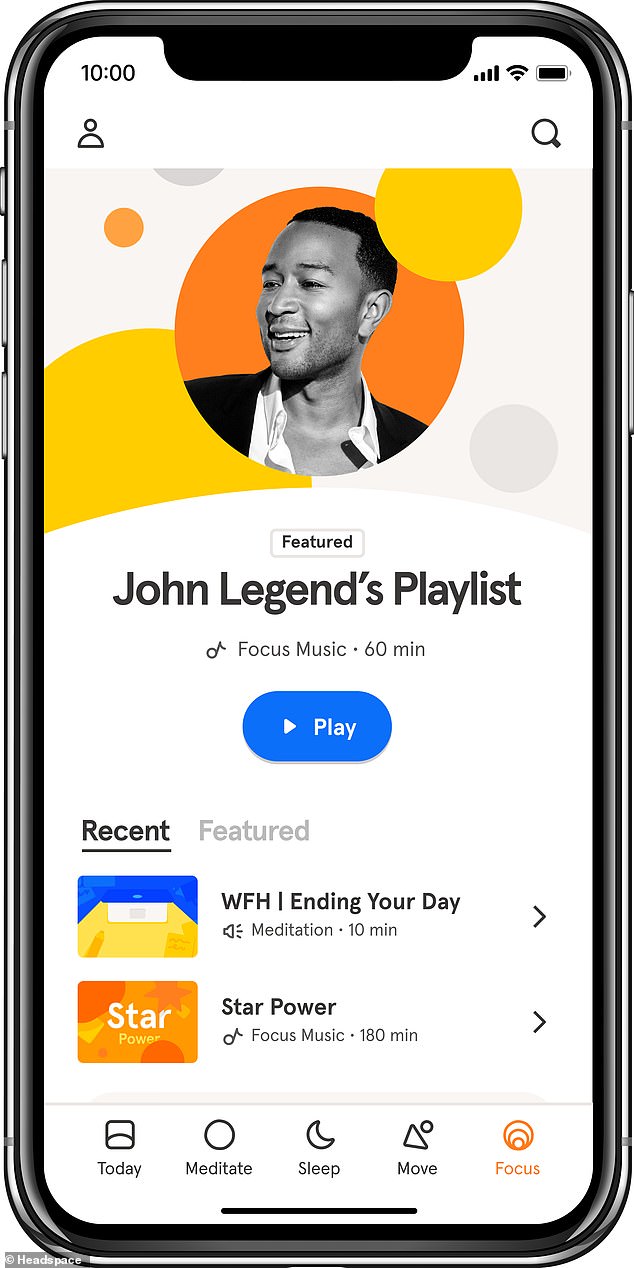 Singer John Legend has curated a playlist to help people focus, featuring 60 minutes of music on the app Headspace, which John says will help you to ‘get in the zone and stay there’

Focus Like A Legend by John Legend, Headspace app, £9.99 a month, headspace.com

Launched in 2012, Headspace is the brainchild of British businessman Andy Puddicombe, a former Buddhist monk. Singer John Legend has been appointed the meditation app’s chief music officer. He has curated a playlist to help people focus. It’s 60 minutes of music that John says will help me ‘get in the zone and stay there’.

There’s only one teeny problem: it’s jazz. Call me a philistine but the tracks all sound the same to me. However, I see that it could be relaxing to listen to some gentle tunes.

There are 12 tracks in total, all instrumental from artists including Sam Rivers, Wendell Harrison and Bob Moses — none of whom I’d heard of.

The hour passes pleasantly enough but I’m afraid I’m still not a convert to the delights of jazz.

VERDICT: One of the cheaper apps, it’s good value for money. I can’t say John Legend’s playlist helped me focus but I did enjoy the short meditation recordings. 2/5