Who are the most hated people on Married at First Sight? Ines? Sam? Elizabeth? Now they’re gone, Cyrell stepped up this week, as did intruder Susie.

But no. I’d like to suggest the most hated people on MAFS are the “experts” John Aiken, Mel Schilling and Dr Trisha Stanford. 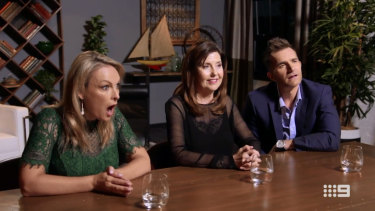 Are Mel Schilling, (left), Trisha Stratford (middle) and John Aiken (right) the most hated people on Married at First Sight?Credit:Nine

“I feel like I would be a more successful matchmaker than the 'experts' if I was told to down a bottle of scotch and then handed two darts and told to fling them with my eyes closed in the middle of a crowded pub.”

“If you need help finding the right person then you’ve come to the wrong place. These ‘experts’ don’t know what they’re talking about.”

Not only have their matches in season 2019 left us all perplexed by the process – one which, perhaps somewhat naively, you hope goes beyond ratings. Yes, we saw Dr Trish giving Michael something to smell in a lab. Yes, they seem to talk about what they think each individual will bring to the coupling. Yes, there have been some moments on the couch where they’ve made sense.

But not many. I was infuriated a few weeks ago when Aiken turned an argument around on Heidi, letting the gaslighter Mike get off scott free. I’m getting sick of Dr Trish asking how everyone’s “intimacy” is going, why is she so fascinated by other people’s sex lives? And when Mel took Bronson to task for a few bleepy swear words and let Ines’ behaviour slide right by, I wanted to turn the television off.

But I didn’t. Instead I sought out some experts of my own to see if science could do a better job of finding me a mate than I could.

A few years ago I tried a matchmaking service. The Third Wheel was set up by a local businesswoman Aerin, a company aimed at those over 35, looking to meet new people, perhaps potential partners. I tried three dates with Aerin, all interesting men, but they weren’t for me and probably vice versa.

I’d shelved any idea of dating for a while, content to stay at home with my cats and meals for one and MAFS on demand. (Note: I do not have cats.)

Then Aerin called not long ago to tell me that she was putting the bike lock on The Third Wheel for a while. She’s back at work after a second baby, living a full and happy life, and she just didn’t have time. She was referring some of her clients to a different match-making business hoping to move into the Canberra market if I was interested.

Vital Partners started in Adelaide in 1986 and now has a large client base in Sydney, country NSW and hopefully, soon, the ACT. More than 25,000 men and women have been introduced since then and, via their testimonials page, many a relationship has formed.

I met with manager Recel Tayor as part of the process. The service includes a very personal initial consultation where you chat about what you are looking for, who you are looking for, talk about your interests. It was like opening up to a complete stranger, and a good opportunity to think about what it is that I actually want. Companionship, she asked. Ahh, no. Am I allowed to say I want to meet someone who might like a bit of canoodling at half-time during the footy? Appears I was. Yes, I need companionship too, but I’m not ready to sit on the couch with my cats and a crocheted rug just yet.

Tayor spoke about their typical clients. There are those ready to settle down, but not liking the online scene or going out to pubs and clubs. Busy people, professionals and even older people who might be ashamed to tell their families they want to get back into the dating scene. What most of them have in common is a need for privacy and discretion.

One of those clients was Kerry, a 52-year-old Canberra woman. A senior public servant, she didn’t want her face and details all over Tinder. She knew her ex-husband was and couldn’t bear the idea of seeing him there, or he seeing her. She’d been married for 22 years, had a couple of teenage children, and when a friend recommended seeing a matchmaker she tracked down Vital Partners.

“I'm a very trusting person by nature,” says Kerry, “and if you're not always good at judging character then you can get yourself in a lot of trouble on the internet.

“I recognised it would be good to have someone help me through the process.

“Their job is to understand people and different stages of life people are in, different circumstances, I think that can help you alleviate how many hideous coffees you have to have.”

She had a few, she laughs, but then she was introduced to John.

“I hated his photograph when I first saw his profile,” she says.

“But the team told me to rethink my decision because they knew we would get along.”

They spoke for about six weeks before they decided to meet. John lives on the South Coast.

“It was the best thing I ever did,” Kerry says. “I’ve learned to be open-minded about all sorts of things. He’s 68 and I my first reaction was you’re kidding, but he’s interesting and fun, he brings me coffee in bed. I adore him.”

The pair have been together for about fourth months now. Kerry believes in the experts, in the process.

Perhaps we shouldn’t be basing our opinions about matchmakers on those directed by ratings, but on those who only have to answer to love.