Jennifer Lawrence rose to such dizzy commercial heights so early in her Hollywood career that it’s sometimes forgotten she made her breakthrough in 2011 in Winter’s Bone, a powerfully austere independent film set in the Ozarks and produced for just $US2 million. 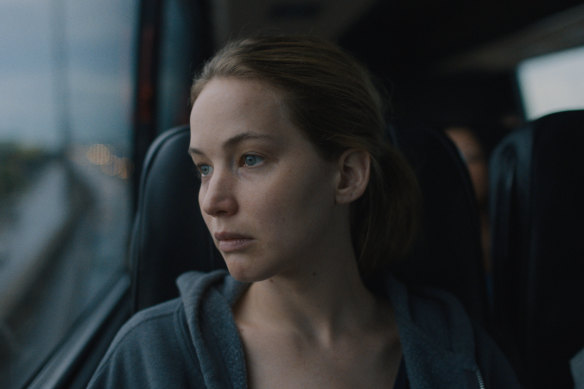 Jennifer Lawrence stars as Lynsey, an American soldier recovering from injuries, in Causeway.

At the time, Lawrence was only 19, yet even then, her physical assurance was matched by an air of authority so refined she left you in no doubt of her talent and what she could do with it.

We haven’t seen much of her lately, except for her part last year in Adam McKay’s political satire Don’t Look Up, but she has a strong line-up of forthcoming roles, among them the lead in Luca Guadagnino’s screen version of Burial Rites, Australian writer Hannah Kent’s remarkable 19th century novel about the last woman to face execution in Iceland.

Causeway is a small-scale venture – a first feature from New York theatre director Lila Neugebauer that returns Lawrence to her beginnings. It is just as spare and uncompromising as Winter’s Bone.

She plays Lynsey, an American soldier recovering from injuries suffered in a car explosion in Afghanistan, and we’re well into the film’s opening sequence before she utters a word.

By then, she’s about to make a trip home to see her mother in New Orleans, although it’s easy to see she doesn’t want to go. She would much rather return to her unit, although she has nightmares, panic attacks and a psychiatrist who is refusing to declare her fit for duty.

Her mother Gloria (Linda Emond) does her best to be welcoming, but it’s pretty clear her maternal instincts have long been upstaged by her love of a good time. When Lynsey says no to a companionable late-night drinking session, Gloria loses what little interest she had in trying to learn more about what her daughter has endured.

Lynsey takes a job cleaning swimming pools. It doesn’t pay much but it’s therapy. Pushing a long-handled net around an oblong of clear blue water is soothing, as is her slow-growing friendship with James (Brian Tyree Henry), an affable mechanic who bears as many scars as she does. He lost his leg in the car accident that killed his sister and nephew.

All of this unfolds at a pace that reflects the halting progress Lynsey is making in her emergence from the numbness that followed her physical recovery. Neugebauer will not be hurried and the pared-down script is not going to tell us any more than we need to know and when we need to know it.

It’s effective, although the dogged, humourless mood of it does bring on an urge for action.

When it finally arrives, however, it delivers a scene that is worth the wait. As well as signalling Lynsey’s re-awakening, it’s played out with unexpected tenderness and grace. It’s good to see Lawrence again. Next up, I’d like another demonstration of the comic gifts David O. Russell teased out of her in their funniest film together, American Hustle.

Causeway is streaming on Apple TV+ from November 4.