Women are now TAPING their foreheads for a ‘wrinkle-free’ complexion in a bizarre new TikTok trend – so does it actually work?

Beauty enthusiasts are trying a bizarre new trend that involves taping your forehead overnight in hope to prevent wrinkles.

After seeing the trend on TikTok, a young Sydney model, who calls herself ‘The Aussie Rapunzel’, decided to try it herself and was surprised by the results.

In a now-viral video, she can be seen taping her forehead before going to bed each night and waking up with ‘instant botox’ after seven days.

Hundreds couldn’t believe the ‘hack’ worked, but experts claim it isn’t long-lasting and is simply a way to ‘train yourself’ to not raise your eyebrows. 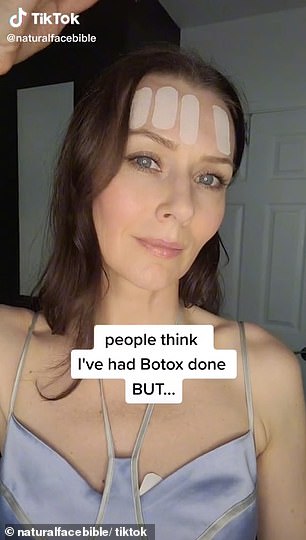 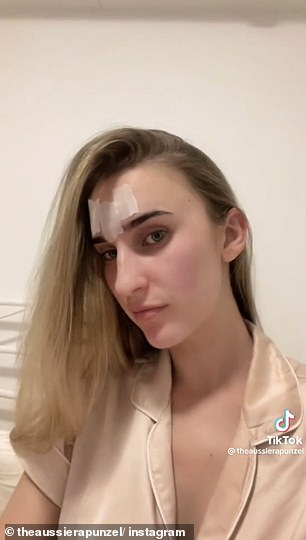 Women are now taping their foreheads in a bid to prevent unwanted wrinkles. After seeing the trend on TikTok, a young Sydney model, who calls herself ‘The Aussie Rapunzel’, (right) decided to try it herself and was surprised by the results

‘I tape my forehead every night for one week,’ The Aussie Rapunzel wrote in the video, adding: ‘I didn’t think it would work!’

Earlier this year Olga, who runs the ‘Natural Face Bible’ TikTok account, also tried the hack and was left with a crease-free forehead.

At the age of 46, Olga looks like she’s half her age simply by taking care of her skin.

‘People think I’ve had botox done, but I’ve been doing [the] taping method,’ she said in a viral video.

Plastic surgeon Anthony Youn, from the US, shared his comments on the matter after several videos went viral.

In response to The Blonde Rapunzel’s video, Mr Youn said it’s evident the wrinkles appear to be ‘a little bit better’ after each day – but this is an illusion.

‘By putting tape on your forehead, it reminds you not to elevate your brows so high to create these lines,’ he said.

‘Putting tape on your forehead in general is not going to make wrinkles better, it’s not going to reduce lines. It’s just a reminder not to make them yourself,’ he said.

Others joked how TikTok is the ‘only platform that can successfully convince people’ to put tape on their foreheads.

But others said they’d be keen to give it a try themselves.

‘Not me adding tape to my night routine,’ one woman wrote.