A woman whose desire for sex has dwindled since giving birth claims her husband gets into a mood when she doesn’t want to be intimate and has said she’s ‘lucky’ that he still finds her attractive.

Posting on the UK-based forum Mumsnet, the woman explained that she didn’t have a high sex drive before the birth of her son more than a year ago, and it’s decreased even further since.

She said her husband wants sex multiple times when they have a night away from their child and claims she should be ‘happy’ that he still desires her, while giving her the cold shoulder if she turns him down.

Many responses to the thread advised the woman to speak to her doctor to find out if her hormones are an issue, but others argued she should leave her husband and consider that he might stray from their relationship. 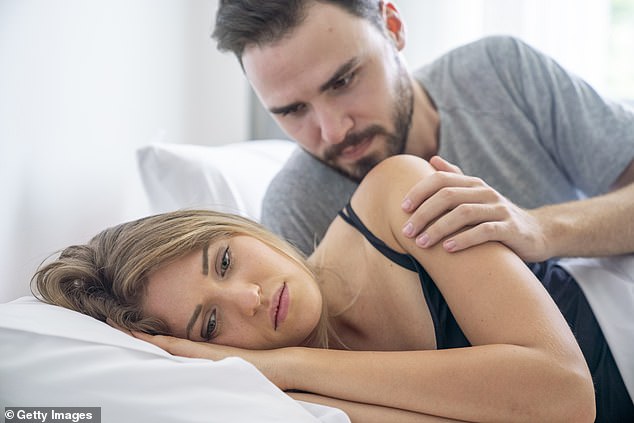 A woman, who lives in the UK, revealed she hasn’t desired to have sex with her husband since giving birth (file image)

The woman penned a lengthy post explaining that her lack of desire for sex is causing tension within her relationship.

She wrote: ‘My partner wants to have sex all the time but I have zero interest.

‘We have a one and a half year old toddler and it’s been the same since he was born. Pre baby I didn’t have a high sex drive either, but did have some interest in sex. However since my son was born I have no desire to have sex whatsoever.

‘My husband was very understanding at first but now I feel like it’s a total area of contention in our relationship. When we don’t have sex when he “expects it”, i.e. when my son stays at his grandparents or when we have a night alone or his birthday, he goes in a massive mood and doesn’t speak to me or mopes about.

‘I’ve tried having a chat with him and explaining my take on things. He says all the right things at the time but then it just comes back round again.

‘When we do have sex, for example this week when my son was away, he wants this several times in the one day or night. Again when I don’t want to more then once I get the cold shoulder or ignored. 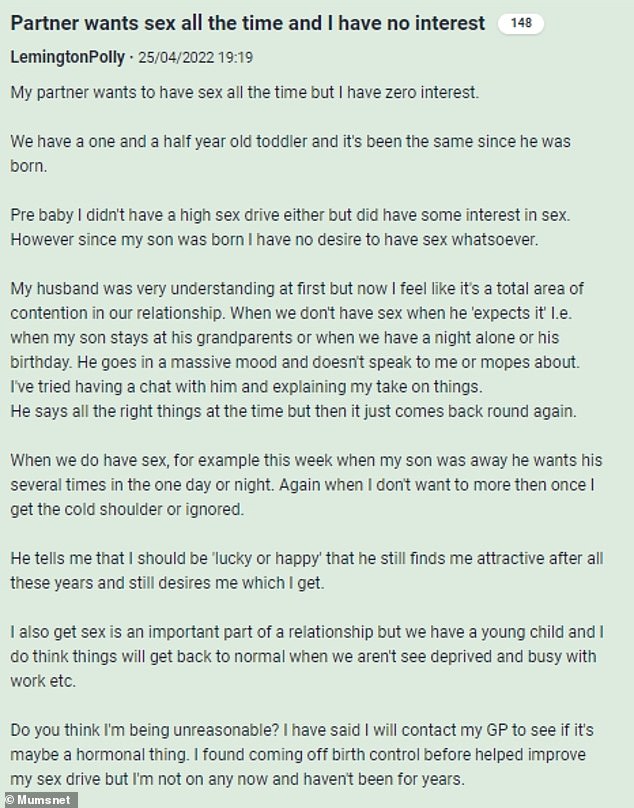 Posting on Mumsnet, the woman said her husband expects to have sex continuously when their son stays at his grandparents

‘He tells me that I should be ‘lucky or happy’ that he still finds me attractive after all these years and still desires me which I get.

‘I also get sex is an important part of a relationship but we have a young child and I do think things will get back to normal when we aren’t sleep deprived and busy with work etc.

‘Do you think I’m being unreasonable? I have said I will contact my GP to see if it’s maybe a hormonal thing. I found coming off birth control before helped improve my sex drive but I’m not on any now and haven’t been for years.’

Many commenters warned the woman that her marriage won’t last if she continues not to have sex and suggested that she might be more compatible with someone else.

One person wrote: ‘I know this is controversial but if my husband didn’t want sex for a year and a half our relationship wouldn’t survive either. The husband shouldn’t be sulking about it if she has made it clear she isn’t interested in him that way though and should just leave her instead. 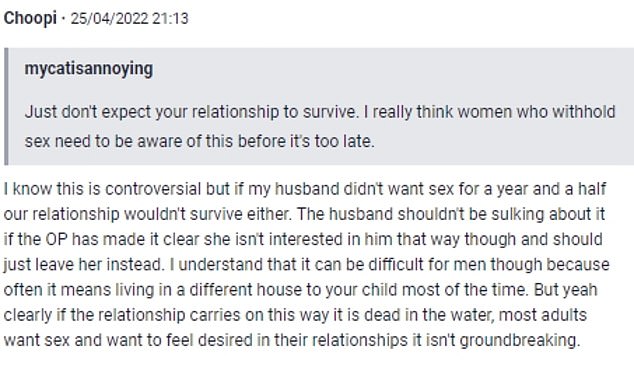 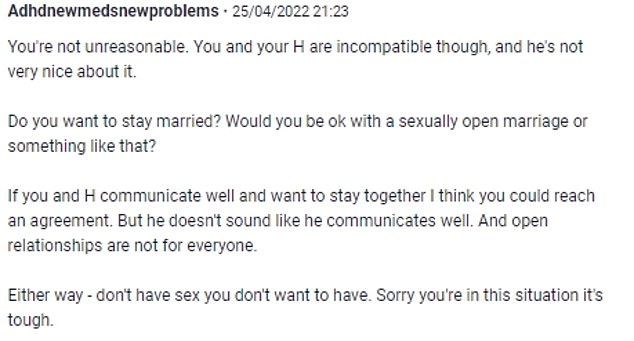 ‘I understand that it can be difficult for men though because often it means living in a different house to your child most of the time. But yeah clearly if the relationship carries on this way it is dead in the water. Most adults want sex and wanting to feel desired in their relationship isn’t groundbreaking.’

Another said: ‘You would be happy for the relationship to be sexless. You know that but you haven’t told him that because you don’t want the marriage to end. It really is hugely common and painful. It happened to me.

‘I left. And discovered that actually I have a very high sex drive I just wasn’t that compatible with my ex husband. With my partner, we are equally matched and much more happier.’

A third warned the woman her husband may lose interest if she doesn’t have sex, saying: ‘There is only one way that this will end. No sex for the husband means he will look elsewhere.’

However, others told the woman that she should seek help from a professional and work on improving the communication in her relationship. 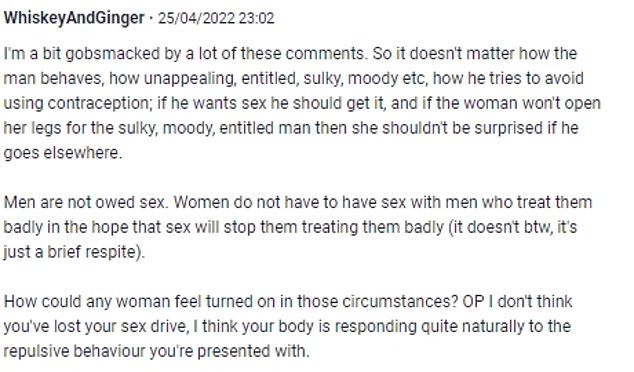 ‘Could you try couples counselling?,’ one wrote.

Another said: ‘Have you tried going to the doctor? I think for women the more you have it the more you want it, so if it’s not happening at all it sort of doesn’t trigger the desire.

‘But he shouldn’t be acting in that way to you but it clearly needs sorting out as to what happens, it’s clear you’re not meeting each other’s needs. H needs to be grown up about it and support you with it.’

A third added: ‘He should respect that you don’t want sex all the time and sometimes just cuddled up on the sofa is better.’