Mother who promised she would take her adopted dog to visit it’s former owner before changing her mind is slammed – so what would YOU do?

A mother has sparked a furious online debate over whether she should continue taking her dog to see its former owner as she promised.

Taking to the parenting forum Mumsnet, the unnamed woman, from the UK, explained that she agreed to take on a dog when its owner moved to a care home 14 months ago.

She revealed she initially agreed to take the dog to see its former owner regularly, but that a change in her circumstances and caring for her sick child has now left her struggling to honour the engagement.

After she asked the forum if she could reduce the number of visits or should honour her word, Mumsnet users were left divided, with some saying she promised to commit and others saying the dog is now hers and she has no obligation to live by the verbal agreement. 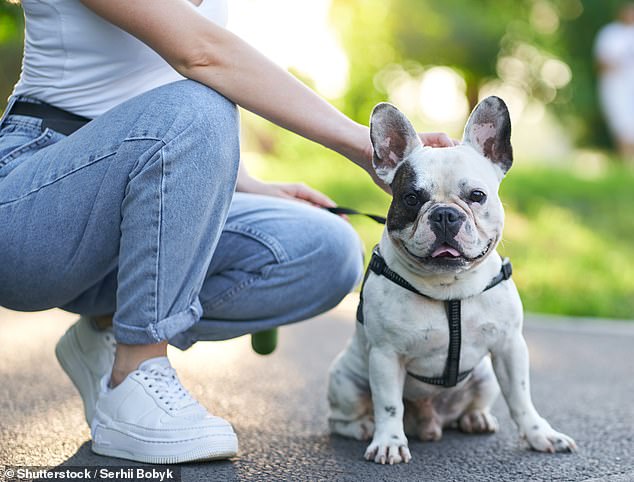 Dog fight: A woman has asked if she is being unreasonable to limit her dog’s visits to its former owner as her life is now very busy (stock picture)

In the original post, the woman explained how she took on the dog 14 months ago.

She wrote: ‘It was a social media plea from [the owner’s] children and it came with the stipulation that they would like the dog to visit their mum regularly etc which was fine.

‘We didn’t sign a contract or anything, more of a verbal agreement and the dog’s microchip is now legally signed over to me,’ she added.

She explained that she lives 45 minutes away from the former owner’s care home, and has been visiting every month since taking on the dog. 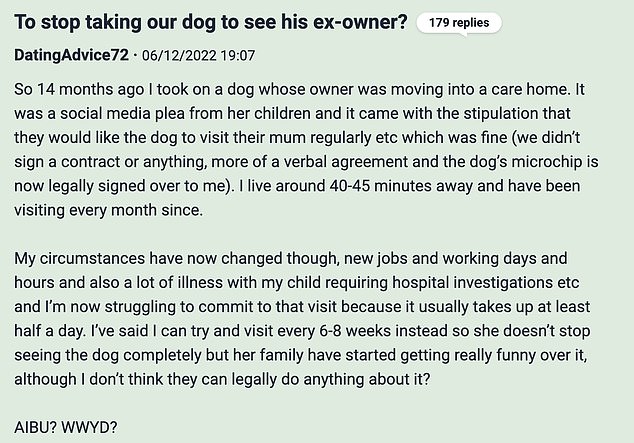 In the original post, the woman explained that she now wants to reduce dog visits to every six-to-eight weeks as she has a sick child to look after

But she said her circumstances have now changed both in her working and family life.

She said she has ‘new jobs and working days and hours […] and also a lot of illness with my child requiring hospital investigations etc.’

And she added: ‘I’m now struggling to commit to that visit because it usually takes up at least half a day.

‘I’ve said I can try and visit every six to eight weeks instead so she doesn’t stop seeing the dog completely but her family have started getting really funny over it, although I don’t think they can legally do anything about it?’

She asked whether she would be right to want to reduce the number of visits she made to the care home, and asked others what they would do in her situation.

The post got hundreds of comments with many Mumsnet users thinking reducing the visits would be unreasonable.

One wrote: ‘I think it’s a bit unreasonable to be honest. You agreed but yes things change. But it doesn’t sounds like much has changed, just life getting in the way.’

The poster addressed this claim, saying that her child’s ongoing medical condition is a ‘pretty big life change’.

But others said that she  has made a verbal agreement and that going back on it would be ‘wrong’.

One wrote that it was unfair to not ‘give a toss about the original owner’.

She added: ‘If they specifically asked for someone who would honour these visits and you specifically said you could then it is bound to be awkward when it is no longer possible.’

But many others thought that the new dog owner is not doing anything wrong and that the former owner’s family would be wrong to expect any contact with the dog.

One asked: ‘Have they paid you for your time and expenses to visit their mum? They are being unreasonable.’

Another wrote: ‘You have been very generous facilitating that much contact. The dog is legally yours and [you] can do as you please.

‘That’s the risk when you re-home pets. You lose any rights to access them.

‘If it doesn’t work for you anymore then stop and spend that precious time with your child.’

A further poster wrote: ‘It think it’s totally understandable in your position and I would do the same.

‘It’s not nice for the previous owner but circumstances change.’

There were some users however who said the woman was ‘stupid’ and ‘ridiculous’ for having agreed to the arrangement in the first place.

One wrote: ‘I would only consider this [arrangement] if I was being paid to look after the dog, or the relatives would pick the dog up and let it see the relative.’

Another wrote: ‘Every visit you make is a very kind gift, should not be a pressure and needs to fit into your life.’

If you enjoyed  this story...