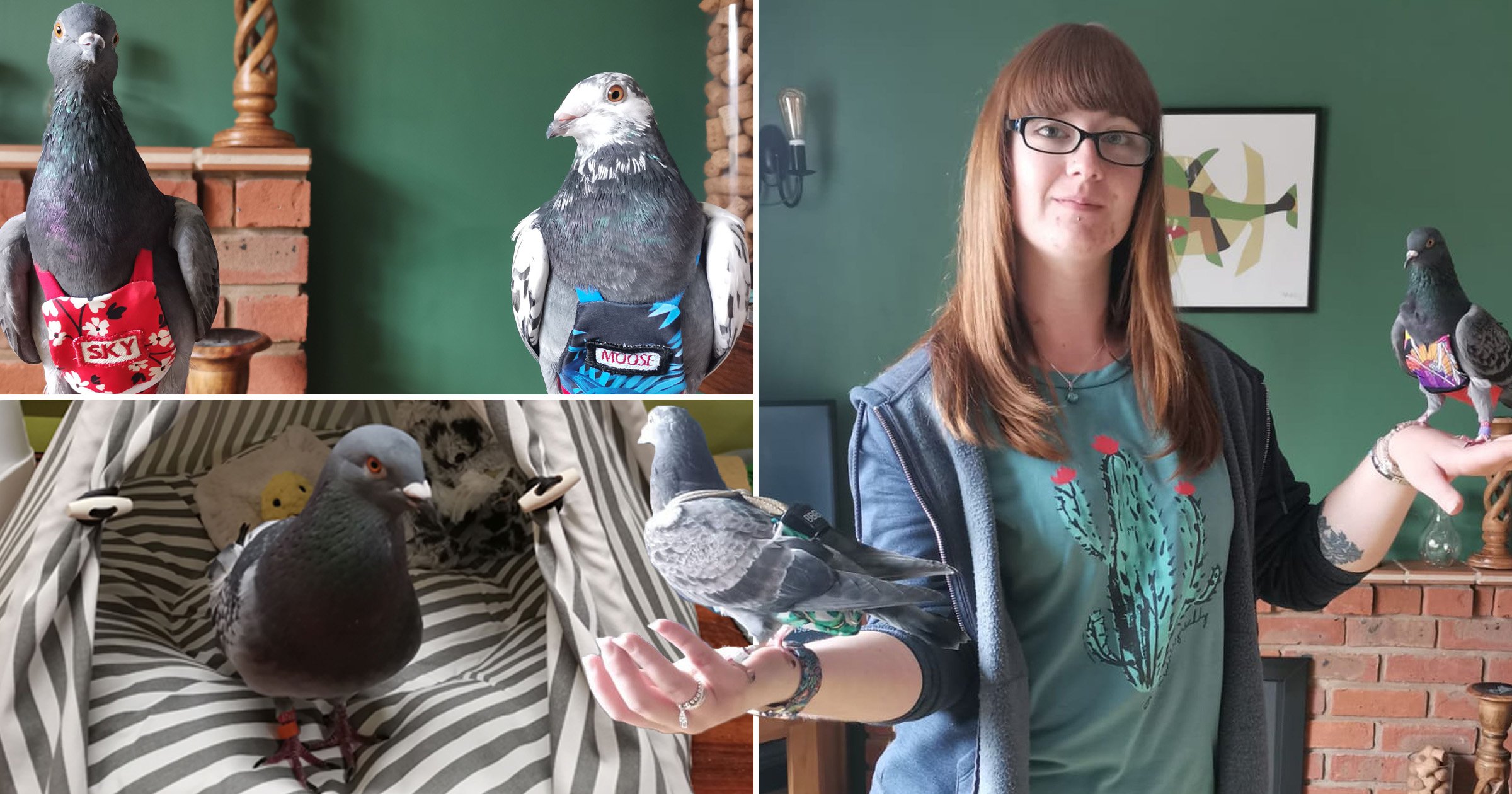 A woman spends thousands of pounds each year on her ‘fashionista’ rescue pigeons, who have their very own adapted bedroom, a wardrobe of outfits and a pram for going on walks.

Meggy Johnson rescued her beloved birds Sky and Moose after they were found abandoned and as chicks, or squabs.

The 23-year-old hand-fed them with a tube around the clock for six weeks, nursing them back to health until they became as tame as any other pet.

Now, her beloved pigeons live a ‘life of luxury’, with birthday presents, a collection of soft toys and even walks outside the home in a special stroller that allows each bird a view of their surroundings.

Despite people branding the birds ‘flying rats’, Meggy insists they make great pets and ‘deserve a chance’ just like any other animal.

Meggy, from Louth, Lincolnshire, said: ‘They have their own converted bedroom which is their space and they have all their little perches, toys and wardrobe. They live the life of luxury.

‘They are fashionistas and have their own wardrobe with about 17 outfits – each one costs between £25 and £30.

‘They do look super cool, but the outfits are also really practical because they catch their poo and help keep the house clean.

‘You can also attach a little flight leash to take them into the garden for some fresh air – Sky likes to sit on my shoulder and sunbathe, and she’s never even attempted to fly off.

‘I also take them out for walks in a little pigeon stroller which is nice for them to get the natural sunlight.

‘I spend between £300 and £400 on them a month but if I looked through my bank account I would probably shock myself, it could be more.

‘We also celebrate their birthdays and “gotcha days” of when they were rescued, and I spoil them as you would any family member with lots of presents.’

Meggy first discovered her love for pigeons in 2016 when her late dog Pippa made her aware of a nest in a hedge while out on a walk.

Inside were two pigeon chicks, one dead and one alive, so Meggy scooped up the surviving squab and took it home.

After getting in touch with wildlife rescue centres for advice, she was able to save the little bird and has been an avid pigeon rescuer ever since.

She since rescued Sky, now two years old, in September 2019 when a workman brought the abandoned baby bird to her pet supply shop in a plastic bag, and Moose, who’s now five months old, in May when someone called to say the one-eyed baby bird had been born.

Meggy said: ‘Some people would say let nature take its course, but I think all animals deserve a chance and especially pigeons, they get such a bad rep.

‘A gentleman came into my shop swinging a Tesco carrier bag around with Sky in and said “I’ve brought you a pigeon” – it’s funny to look back now, and she’s nicknamed “Carrier Bag” because of it.

‘I said, “Be careful if you’ve got a baby pigeon in there!” She was only two weeks old at the time and so small.

‘She had to be hand-fed around round the clock like a mummy pigeon would do.

‘He was born with a gentleman in Middlesbrough who contacted me and I said, “Yes please, I’d love to rescue him and give him a chance.”

‘I didn’t get him until he was five weeks old because he was four hours away from me and had to come by a special bird courier, so I wanted to make sure he was old and fit enough to travel.’

Meggy also cares for two other rescue birds – Clee the pigeon and Snowy the domesticated dove – who live in her pet supply shop.

Both birds are disabled and can’t fly, so they wouldn’t be able to survive in the wild.

Meggy rescued Clee, now 18 months old, in April when a member of the public called her to say they’d found the bird wedged between their house wall and garage, and Snowy, a domesticated dove the same age, joined the rescue family in October 2020 after being found in a hospital car park.

Now, the pair are just as spoiled as the birds that live with Meggy, and have their own collection of soft teddies and toys along with a teepee bed.

Meggy said: ‘Clee was only about 12 weeks old at the time, just a baby. The vet thinks he was bitten by a rat on the wing because he had this awful, big infected lump the size of a golf ball.

‘He had to have antibiotics, painkillers and an antibac wash and after a few weeks it got better, but the injury has left his wing really stiff, so he can’t fly.

‘Snowy came to me with a neurological illness, it made her have really bad balance and her head would spin round in circles, so she couldn’t eat or drink herself for six months.

‘Because of the brain injuries, she can’t fly either. She was a stray found in a hospital car park, at risk of picking up illnesses, or she could’ve been hit by a car, we’ll never know.

‘Now she’s fully recovered other than the occasional head movement and wobble, and she can eat and drink herself.

‘It’s amazing because we thought we would lose her a few times, but she pulled through.’

While wild pigeons have a life expectancy of roughly two years, pet birds cared for in a home can live for 15 years, so Meggy expects to see all of her rescue pals hit their teens.

She says that even though some people have said some rude things about the birds, most people are simply surprised to see how friendly and smart they are.

She hopes to change the negative attitudes people have towards pigeons, and help show that they’re clever, sweet animals.

Meggy said: ‘Some people say, “Ew pigeon” and call them “flying rats”, which is something as a pigeon-lover that really upsets me, but most people are more open-minded.

‘The bond that you can get with them is amazing – Clee comes running to his name and follows you like a dog. They make the best pets, they’re so funny.

‘When you hand feed them they get so trusting. You can sit with them, and they’ll come and jump on you and sit on your shoulder.

Meggy isn’t the only pigeon-lover to give her birds their very own wardrobe.

As of January this year, former racing pigeon Buddy had six pairs of trousers to choose from, all designed and handmade by artist Anastassia Fulmer.

Stylish as well as functional, the garments allow for him to fly around his owner Caitlyn Polyak-Roach’s Michigan home without her having to worry about any, well, mess.