A furious mother has apparently humiliated her cheating husband by spray painting a message on the couple’s mattress for him and his mistress and leaving it outside the family home.

In the brutal message, the scorned woman claims she told her husband and the father to their children she would be divorcing him.

‘I changed the locks [husband’s name]. Take the bed to [mistress’ name] house S**t. I’m divorcing you. I told the kids what you did in our bed and they don’t love daddy anymore’, the message in bright red spray paint reads.

A photo of the mattress outside the family home, taken somewhere in Australia, was shared to Reddit on Monday. 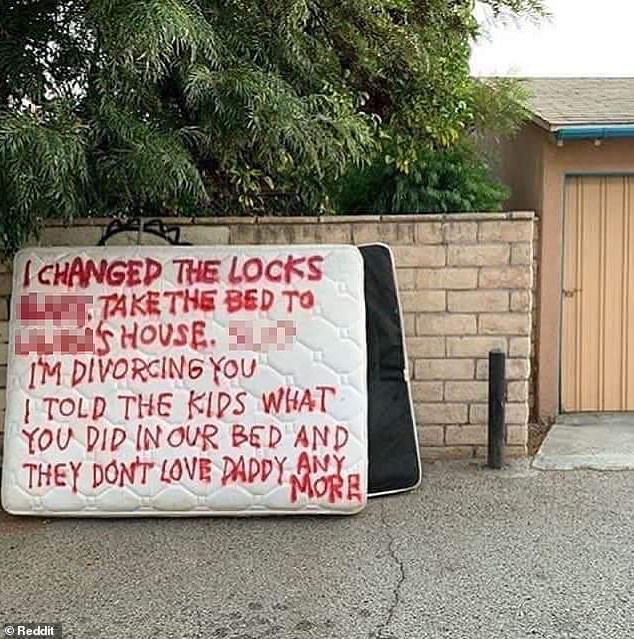 Most users sympathised with the mother and said her cheating husband ‘got what he deserved’.

However, there was also plenty of debate about the mum choosing to tell the couple’s children about what their father had been up to in her message to their father.

Is the wife in the right?

Is the wife in the right?

‘If you have a wife and kids you’re cheating on your whole family. They [the kids] are already involved’, one said.

Another wrote: ‘Cheaters deserve what they get… I don’t think this was unwarranted. Especially if they were married with kids’.

‘He brought the kids into this by cheating on their mother. Did you expect her to lie to them and not explain why dad isn’t coming back?’ one agreed.

One person wrote: ‘I see no problem with telling the kids the truth. Dude f**ked up and faces the consequences’.

‘Shaming your partner for cheating is fine in my book but your kids deserve to have a good relationship with their dad, not have him slandered for something that had nothing to do with them’, one person said.

‘As someone who has divorces all through my family I can tell you first hand how bad it is to drag the kids into it… the kids need parents plural’, another agreed.

However, another pointed out that kids can be left ‘scarred’ by such a troubling incident between parents.

‘Leave the kids out of it! Damn, why do people always try to bring kids into grown up problems.’

What are some of the reasons people cheat ?

Affluent women were 8 per cent more likely to be unfaithful to their husbands than middle class wives, while the prevalence of infidelity for poor and rich men was equal.

Key signs that you are the other woman or man

* Dates are spontaneous and there are no long-term plans

* Most of your phone calls happen during the day

* You don’t go to venues near their house

* They will react defensively if you question them too much