Households were not only hoarding canned goods and toilet paper during the coronavirus pandemic, they were also stockpiling rolls of coins.

Demand was so high for 20¢, 10¢ and even 5¢ pieces when COVID-19 sent the nation into lockdown that the Royal Australian Mint was forced to double shifts to produce enough change to keep up over the past financial year. 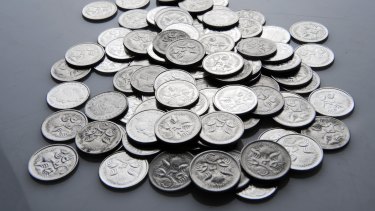 Five-cent pieces were among the coins being stockpiled during the pandemic.Credit:Adam Hollingworth

The rush for change was unexpected as restaurants, cafes and retail outlets went cashless during COVID-19 and lockdowns meant many were switching to online shopping.

Royal Australian Mint chief executive Leigh Gordon said he believed some of the coins were being stockpiled by individual households.

“In times of crisis, people sometimes lose trust in some of the institutions – governments and banks – becoming more dependent on using cash,” he said.

He said demand for $1 coins had not been as significant as for smaller denominations during the pandemic due to South Australia switching to cashless gaming machines, putting more coins back into circulation.

The Reserve Bank also recorded a rise in demand for cash, mainly $50 and $100 notes, during the pandemic as people stockpiled funds. At the same time, ATM withdrawals fell sharply and the lowest number of cheques on record were drawn.

A rise in state and federal government stimulus pouring money into the economy was also noted by the Mint as a potential reason for the uptick in demand.

This saw the Mint exceeding its forecast for circulating coin sales by $42 million, or 105 per cent above what was expected over the 12 months. The Mint also recorded its biggest-ever commercial revenue result in part because of a jump in collectible coin sales and also due to rising demand for gold such as investment and bullion coins during the crisis.

Over the year, 176 million coins were sold to commercial banks worth $83 million, while 215 million were produced to replenish its stock.

In 2020, there were 2.8 million circulating 5¢ pieces purchased from the Mint by external parties such as banks. Other than a spike in 2018 of 37.2 million of these coins being purchased due to a change in bank deposit requirements, this is the highest since 2014. The number of 20¢ pieces was at its highest since 2012.

It costs more to produce a 5¢ piece than it is actually worth due to the cost of the nickel, copper and labour required. Former Mint chief executive Ross MacDiarmid previously said he expected the use of lower-denomination coins would continue to decline until they would no longer be required.

But Mr Gordon said there were no plans at present to scrap the 5¢ piece, despite it costing 5.9¢ to make.

“We’re really led by the demand from the Australian public and at the moment the demand seems quite strong.”

While coins may have had a resurgence during the pandemic, the Mint expects this to be short-lived with a return to typical demand levels by 2024 and an ongoing reduction in use as contactless payment methods increase in popularity.