The Saturday Night Live star and serial dater recently rode a rollercoaster with Kim Kardashian, and now the internet is melting down. Let us debrief.

What’s all this fuss about Pete Davidson?

If you’re here to talk about Kim Kardashian dating someone, I am not interested.

Not just anyone, Pete Davidson!

The 70-year-old English actor who played the fifth incarnation of the Doctor in Doctor Who between 1981 and 1984? I must say I’m a little surprised.

Oh, right. And who is he dating?

Who cares? This is important news.

Because Kim, 41, hasn’t been linked with anyone since she split with Kanye West, and Pete Davidson, 27, is basically famous for dating a string of women who are better looking, far richer, and probably more talented than him.

If he’s famous for dating lots of women, why are we excited that he’s…dating another woman?

Because dating a Kardashian is like taking on the final boss in the dating game.

What is he actually famous for?

He’s a stand-up comedian and actor, but people mostly know him for being a cast member on Saturday Night Live.

ZOMG. So, this is a workplace romance?

Possibly. The pair starred in several sketches together, including one where Davidson played Aladdin and Kim played Jasmine, which ended with an onscreen kiss.

That’s one magic carpet. Then what happened?

The pair hung out over the Halloween weekend together, and guess where they went?

Exactly. They were snapped holding hands while on a rollercoaster with friends.

Who is the lady in front of them?

Someone who probably regrets going to the theme park that day.

Has there been a second date?

Second and third, according to the team over at TMZ. Earlier this week, they were spotted going to a pizza and pasta joint in Davidson’s hometown of Staten Island, New York. Then the very next night, they had a group date at Zero Bond, a restaurant in New York City.

Let’s circle back to Davidson-the-famous-dater.

Yes, he is the definition of dating up.

Davidson has a track record of dating women who seem, on paper at least, above his pay grade. He had a few girlfriends, but we really took notice when he started dating pop star Ariana Grande in 2018. 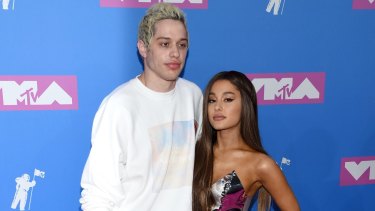 I know. The pair became very close and even got in engaged, but it didn’t last long. However, it lasted long enough for her to tell the world he had serious BDE.

Big d–k energy. After they broke up, she told the world he was well-endowed.

What a lovely parting gift.

No, Beckinsale. They dated for a few months before he moved on to supermodel Kaia Gerber, then Maid star Margaret Qualley, and most recently, Bridgerton leading lady Phoebe Dynevor.

Wow, so what is the big deal about Pete? I mean, besides the big energy.

Well, he’s funny, has lots of tattoos and seems to be a genuinely nice guy. But he doesn’t really fit the mould of your typical heartbreaker.

Hmm. Correct me if I’m wrong, but isn’t the faux bad boy having a moment?

How are people reacting to this news?

Generally, the internet seems baffled but happy for Kim. There are also a few gags about which stunning goddess Pete might end up with next.

Fantastic. Anything else to report?

I will leave with you this. Such is the Davidson-fever that adult entertainment website CamSoda has released a Pete Davidson sex toy, a lifelike recreation of his appendage.