Try before you buy has given way to screen before you glean. As shows get purchased and remade, moving from one language to another, and as the hunt for malleable intellectual property becomes all-consuming, it’s increasingly likely that the original series will be available alongside the high-profile remake: there was the Danish Forbrydelsen and its American successor, The Killing, to contrast, or you could watch the original Israeli therapy drama Be Tipul and then compare it to the successive American editions of In Treatment.

As ever, Australia will not be left behind. Foxtel’s big ticket courtroom drama The Twelve is based on a Belgian series De Twaalf, which is now available via SBS on Demand. You could choose to watch one and then the other, whether to study the translation or simply grade the duo. There’s even the potential to alternate episodes – certainly there are instances where they resemble each other closely, not just in the concept and characters but individual sequences. Who shot the second-episode dumping of a body at a bus stop better? 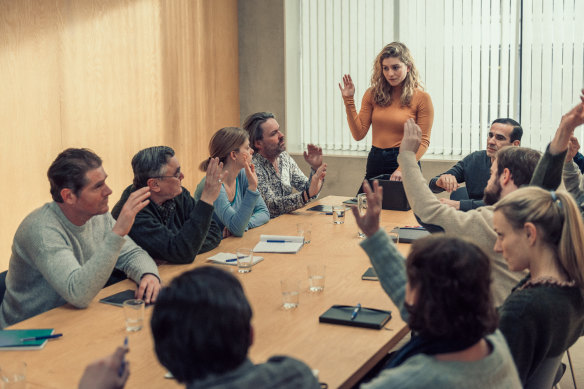 A scene from De Twaalf, the 2019 Belgian drama which was remade as The Twelve and recently aired on Binge and Foxtel. Credit:Thomas Nolf

The Belgian Twelve differentiates itself through an unyielding grimness. The titular dozen are the jurors (plus two alternates) in a controversial murder case, but as the storylines unfold it becomes clear that those deciding are caught up in their own trials: bitter loneliness, fractured families, workplace corruption, personal addiction and buried guilt are all at play. I’m not sure any of these people are suited to deciding the fate of someone facing life in prison for two murders, but that’s part of the show’s reductive logic: it’s our flaws that define us.

Compare the courtrooms: a ring of windows fill the Australian location with natural light, concrete panels block out everything in the Belgian version, concentrating attention on Frie Palmers (Maaike Cafmeyer), a school principal accused of murdering her best friend Britt in 2000, then taking the life of her young daughter in 2019 after losing custody of the child to her husband, Stefaan (Johan Heldenbergh), who was previously Britt’s boyfriend at the time she died. Even as flashbacks offer clarification and clues, Frie presents as an unreliable advocate: prone to spiteful outbursts, given to paranoia. 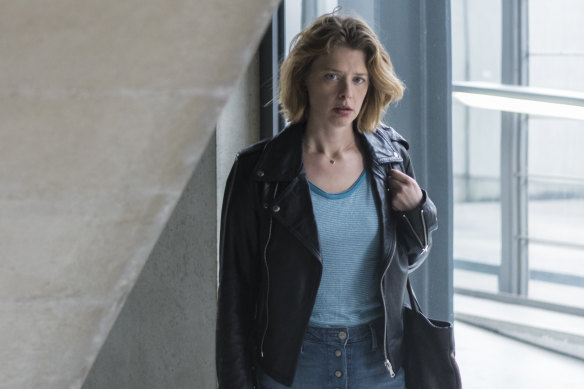 Frie Palmers (Maaike Cafmeyer) is a school principal accused of murdering her best friend Britt in 2000 and her young daughter in 2019.Credit:Thomas Nolf

Some of the jury have strong opinions before they’re even sworn in, others are desperate not to be there – Delphine Spijkers (Maaike Neuville) is mostly concerned with not upsetting her testy husband, while photographer Noel (Piet De Praitere) is worried about his debts. Their interactions are awkward but telling, and the sudden proximity to strangers offers the jury a strange second chance: there are platonic friendships and petty disputes, plus a sexual relationship (pretty sure that’s not in the jury duty handbook). You will not suffer for lack of plotting in this series.

A true twist would have been a happy, unaffected juror, but if the jury’s issues are legion, the contested facts of the central case exert a simmering grip that’s stoked by media coverage and official bias. The two decades between the disputed deaths act as magnetic poles, prying the story open for examination and revealing a theme – the manipulation by men and the price women pay – that supplies a perpetual undertow. De Twaalf doesn’t reinvent the courtroom drama, but the many detailed strands give it a bitter momentum. Fans of the genre will quickly be drawn to it.

The Twelve (De Twaalf) is on SBS On Demand.