While fans continue to mourn the loss of Daredevil, Luke Cage, and Iron Fist, the last of the Netflix Marvelverse is soldiering on. Next up on the list to air another season: The Punisher Season 2, which wrapped filming months ago. Fans have been wondering how long Netflix would wait to put it on the schedule, considering how close together the Marvel shows have been released in the last year or so. Turns out, the wait won’t be long. When does The Punisher Season 2 air? Turns out the answer is "next month."

Film critics bring up "superhero fatigue" like clockwork, as no less than four major motion picture companies (Disney, Warner Brothers, Sony, and 20th Century Fox) all release multiple superhero films a year. But for all the superhero films to arrive in theaters in 2018, these four companies combined have nothing on the sheer amount of superhero content Netflix has put out.

From March of 2018 through January of 2019, Netflix will have released five series in ten months. That’s 88 hours of superhero storytelling in under a year. Assuming, that is, The Punisher‘s new season is 13 episodes, as everyone assumes.

The trailer doesn’t give away the answer, nor does it firm up exactly when in January the show will arrive. The Punisher clip comes at the very end of the video, at the 1:57 mark.

It is notable The Punisher is saved to the end of what is essentially a sizzle reel of Netflix’s usual "What’s Coming In January" press release. But The Punisher being the only one listed as "Coming Soon" is what really stands out. Everyone else on the list, from Netflix’s in-house productions like Unbreakable Kimmy Schmidt to the arrival of Disney & Lucasfilm’s Solo: A Star Wars Story to the service are all neatly lined up in date order, with when each arrives marked in the left-hand corner.

Why no date for The Punisher? One reason: Netflix has been burned before by this series. By the very nature of the character, Season 1 contained a great deal of gun violence, as well as sequences involving (or threatening to involve) mass shootings and terror bombings. The show’s original date announcement back in 2017 was preempted by real-world gun violence, though no one from Netflix ever admitted it officially. 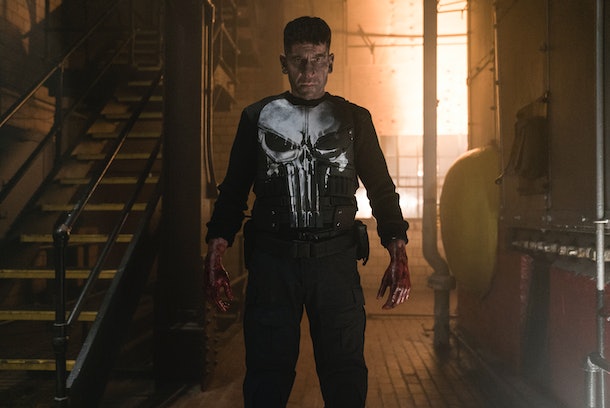 Keeping the date under wraps for Season 2 until the last possible moment gives Netflix room to push the series back if one of the daily mass shootings in this country reaches “stop the news cycle” proportions just as the show’s release is coming up. But it also keeps fans on their toes, and breathlessly awaiting the first real trailer for the show’s return.

Whether the second season of The Punisher will be the last or if it will miraculously land a third before all is said and done will also be on fans’ minds once the trailer does arrive. Until then, everyone will have to wait until the new year for The Punisher Season 2’s arrival.