Glasgow: For two days at the start of the United Nations climate talks, thousands of people watched hundreds of speeches given in tens of languages in a meeting of world leaders that spread across two venues in the sprawling Glasgow centre to ensure that the exhausting roster would be completed.

A few speeches stood out but just one managed to capture the themes and tone of the event such that it was quoted for days afterwards by delegates and observers: an address by Barbados Prime Minister Mia Mottley.

“We do not want that dreaded death sentence. And we have come here to say: ‘Try harder’.”

The language in the speech is significant beyond the moral urgency. Many here at COP26 – including Britain, the European Union, the United States and island states are determined to make 1.5 degrees the generally accepted target of the Paris Agreement, even though that document in fact calls for the world to keep warming “below two degrees” and “preferable” to 1.5 degrees. 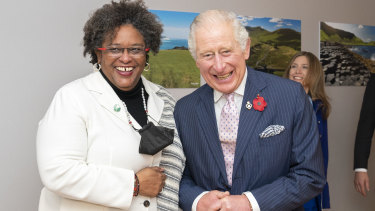 “Try harder”: Prince Charles, Prince of Wales with Prime Minister of Barbados Mia Amor Mottley at the summit. Mottley’s speech was a neatly sketched picture of what needed to happen to address climate change.Credit:Getty Images

Show me the money

She told her fellow leaders that they held the sword that “cut the Gordian knot” with a capacity to channel eye-bleeding sums of money.

“The central banks of the wealthiest countries engaged in $25 trillion of quantitative easing in the last 13 years – 25 trillion,” she said. “Of that, $9 trillion was in the past 18 months – to fight the pandemic. Had we used that $25 trillion to purchase bonds to finance the energy transitions or the transition of how we eat or how we move ourselves in transport, we would now, today, be reaching that 1.5 °C limit that is so vital to us.”

So neatly did Mottley sketch out the two key themes of the COP that its host, Boris Johnson, who desperately needs this conference to succeed, quoted her in an address just hours later lamenting the failure of wealthy nations to secure the annual $US100 billion ($135 billion) in climate finance for poorer ones agreed to in Paris.

“When it comes to tackling climate change, words without action, without deeds, are absolutely pointless,” he said.

“And our record on deeds so far is not exactly stellar – we had a brilliant speech from Mia Mottley of Barbados making the point.

“Back in Paris, richer nations all signed the paper saying that by 2020 we’d be raising $100 billion of climate finance each year and there was no ambiguity, no wiggle room in that.

The task for the COP was set.

If the UN and Johnson – and indeed the world – were to claim that the meeting was to be a success, over the coming days its organisers would have to coax world leaders into signing a document that laid out what mechanisms might be adopted for accelerating reductions, how they might be made fair and transparent, and how the rich world can pay off emerging economies to skip over the carbon-heavy era of their development and prepare for the loss and damage of warming already locked in.

For any of this to work organisers were determined to secure early wins to demonstrate momentum, without which they feared could see the talks stall and fail.

To their relief they secured them.

The first was India’s announcement that it had set a net zero target of 2070. The declaration was a shock to many on site in Glasgow, even though Prime Minister Narendra Modi’s announcement was vague on detail.

It was not clear, for example, if he was referring to all greenhouse gasses or just carbon dioxide. And 2070 seemed a long way off in a conference focused on 2030. There was also the matter of the trillion dollars in investment Modi said would be needed to get it done.

But inside the summit, it was viewed as a significant moment. India is already the world’s third largest emitter and as its population grows larger and wealthier, its carbon footprint will rapidly expand. 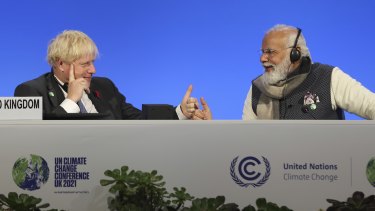 Besides, the very nature of these goals is that once they are set they drive innovation and investment and tend to be rapidly brought forward.

“It really is truly significant,” said Rachel Kyte, dean at Tufts University and a former special representative of the UN’s Secretary-General for Sustainable Energy for All.

“I understand that everyone got confused by the 2070 deadline, but the big story is that other announcement that by 2030, 50 per cent of all energy would be renewable. That basically means that all new energy has to come from renewables. That opens the door for a lot of new investment.

“If India can do that, 2070 comes forward,” she said, adding that the move left Australia isolated, with another of its customers turning its back on coal.

China has already pushed back against 1.5 degree language, with climate envoy Xie Zhenhuan telling reporters in Glasgow: “If we only focus on 1.5, we are destroying consensus and many countries would demand a reopening of the negotiations. The world already has a consensus. We need to be realistic, pragmatic, and focus on taking concrete actions.”

China is now the world’s largest greenhouse gas polluter, accounting for around 27 per cent of global emissions. Its post-pandemic economic recovery was driven by growth in emissions-heavy sectors such as construction, steel and cement, causing a surge in recent emissions.

Not only did leader Xi Jinping not attend the talks, his 500-word written statement was seen as perfunctory by some, though organisers confirmed they accepted no video messages for the leaders’ meeting. Xi vowed China would continue to decarbonise but said wealthier countries should do more to help developing nations. The speech echoed China’s position at G20 talks in Rome, which Xi attended via video link, and at which China opposed – along with countries including Australia – an agreement to rapidly phase out coal.

However, other observers have noted that the recently released “guiding principles” for China’s decarbonisation domestically are consistent with the effort to drive down emissions. And while China may be the current largest emitter, cumulatively it remains a distant second to the US. In UN proceedings, these historical emissions are significant.

Echoing Xi’s statement, in Glasgow Xie has also called on rich nations to do more, normally a negotiating position that sits well with its own UN bloc, the G77, a coalition of 134 developing countries. In this case, though, many members of that group support increasing climate action.

Biden could not resist a parting shot at Xi, who has not left China since the pandemic began. “The fact that China, trying to assert a new role as a world leader, [is] not showing up? Come on. The single most important thing that has got the attention of the world is climate, everywhere,” the US President told reporters before leaving Glasgow. “It is a gigantic issue, and they have walked away.”

Coal not quite killed

Coal pledges also underwhelmed some observers, not so much because they were insignificant as because they had been oversold earlier.

While almost 80 countries signed on to “consign coal to history”, key nations including the US, Australia, China and India did not. Some others were vague about when coal would be buried.

Despite these setbacks, the package and the India pledge had left British COP organisers quietly happy with progress and thrilled when outside observers measured the potential impact of the pledges.

First came an analysis from an Australian expert team led by Professor Malte Meinshausen, at the University of Melbourne. They projected that should the commitments be kept global warming would peak at 1.9 degrees rather than the previous widely accepted projection of 2.7 degrees.

Later the International Energy Agency made a prediction of 1.8 degrees. “This is a landmark moment: it is the first time that governments have come forward with targets of sufficient ambition to hold global warming to below 2 degrees,” said IEA executive director Dr Fatih Birol.

The other successes came outside the formal UN COP process, and were part of a “Glasgow package” of announcements designed to help ensure success.

They were three separate pledges by three large blocks of nations; to reduce methane emissions by 30 per cent by 2030; to end deforestation by 2030; and to transition away from coal in the 2030s (for wealthy nations) and by the 2040s (for developing ones).

By Thursday night in Glasgow, some of these pledges were beginning to look a little shopworn. It emerged that Joe Biden’s climate envoy John Kerry had secured broad support for the methane pledge by making it an easy club to join – signatories are under no obligation to cut their emissions by a set amount, they just have to back the overall goal.

And a day after signing the forests pledge Indonesia said it meant it would not allow a reduction in forest cover – old forests could still be razed if new areas were planted.

Brazil said it would only target “illegal” forestry.

Ana Toni, a non-profit director and the first Executive Director of ActionAid Brazil, told journalists that Bolsonaro’s signature on the forest pledge was important anyway. The Brazilian hard man had once vowed to abandon the Paris Agreement and was now signing COP side-deals, she noted.

“[It shows that] pressure from civil society groups, from Indigenous communities, from the private sector, from the international community is not allowing a populist government to use climate as an ideological issue,” she said.

The HAC is back

With early wins banked and the leaders and their entourages no longer gumming up the works, negotiators are now focussed on the detail. To this end, some nations are beginning to show their hands.

At these climate summits, voting blocs are never fixed and groupings shift and change depending on what issue is being negotiated.

One key group calling itself the High Ambition Coalition formed in secret in the lead up to Paris and forced the 1.5 degree target into the final text. It was founded by small island leaders but managed to win the support of both the EU and the US, before the US abandoned the Paris process under President Donald Trump.

This week, the HAC returned with 27 nations including the US signed up, publishing a declaration calling on nations to support efforts to halve emissions by 2030 to be on track to net zero by 2050, end coal financing and development and halt fossil fuel subsidies. 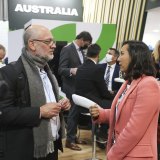 Tim Flannery and carbon utilisation expert Sophia Hamblin Wang at the summit. Like many others he was fearful that the meeting might collapse like the Copenhagen talks in 2009.Credit:Alex Ellinghausen

Separately the now 55-strong Climate Vulnerable Forum issued their own manifesto demanding a “raising of ambition at every single COP, especially from the major pollution-emitting nations,” and urging this to be part of a “Glasgow Emergency Pact”.

This would see nations having to update their climate pledges annually rather than every five years.

This would speed up the so-called “ratchet mechanism” built into the Paris framework by which nations are expected to keep setting and improving their climate goals.

The Australian environmentalist Tim Flannery, who spent much of the week walking the halls and conference rooms as an observer, said he was relieved by what he saw.

“I came into it thinking that failure was more likely than success,” he says.

“It doesn’t feel that way not. Something has changed. There’s no debate over the issues anymore, just the timelines, the pace at which we have to move. There is nowhere left to hide now.”

Get weekday updates on the climate summit that will shape our future. Sign up to our COP26 newsletter here.