Hoodoo Gurus, Chariot of the Gods (Big Time), ★★★½
As with their forthcoming 40th-anniversary tour, the new Hoodoo Gurus album was delayed by events beyond Dave Faulkner’s control – unlike his 2003 decision to crank up the band after a five-year hiatus and release their eighth and ninth albums, Mach Schau and Purity of Essence. Twelve years since that last album it’s the Gurus’ familiar jungle drumbeat on World of Pain that introduces these 14 new songs, only it’s Nick Reith (Radio Birdman, New Christs, Celibate Rifles) pounding the skins. Reith replaced long-time drummer Mark Kingsmill several years ago and brings a powerful gust of fresh air.

Answered Prayers was the first track released as a single in late 2019 (yes, three months before the plug was pulled on gigs around the country), and its title alone heralds a welcome return to live shows. “I’m feeling fickle, a little Travis Bickle,” howls Faulkner as Brad Shepherd (lead guitar), Rick Grossman (bass) and Reith lock into a rumbling Gurus groove. Was I Supposed to Care backs off the throttle, but displays plenty of the band’s renowned punchiness, in a similar vein to 1,000 Miles Away from 1991’s Kinky.

In the great tradition of the Flamin’ Groovies, the Sonics and T-Rex who came before them, the Gurus swing from melodic power-pop (My Imaginary Friend) to crunchy guitar rock (I Come from Your Future), and even sprinkle good ol’ psychedelia dust on the title track. When this masthead spoke to Faulkner last year about the upcoming tour (with Portland’s Dandy Warhols supporting) and the band’s legacy, he said he was “really satisfied and proud” of what they’d done before their break, but there was “a special magic” he hadn’t found again, particularly in live settings. This album captures some of that vintage Gurus energy and the mood on their earliest album, Stoneage Romeos. 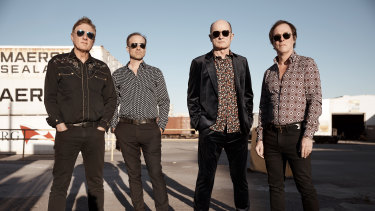 The gutsy, rawness of Don’t Try to Save My Soul shines a spotlight on Shepherd’s slide skills, while Faulkner declares, “I’m a slave for rock and roll”, and back-up singers chime in like the Ronettes. Wayne Connolly (with Faulkner) has engineered some of the band’s leanest, no-frills tunes in many years and mixer Ed Stassium (Ramones, Talking Heads) returns after a mere three-decade break. The mix has Faulkner’s voice front and centre, still belting out his witty, sometimes tongue-in-cheek lyrics and still getting all turned on. Martin Boulton

Off the back of two years that left most artists with scant inspiration for the feel-good genre, Bryan Adams has returned with an album that is – there are no other words for it – defiant in its exuberance. Opening with a soaring title track that harks back to Summer of ’69, the autumn release of 2022 oozes gratitude, thumping backbeats, and choruses made for raucous singalongs. Adams has always written for the arena, and So Happy It Hurts is no exception. Make what you will of the mock-biblical parable that opens Kick Ass: it is in-built theatre, positively champing at the bit to be played live. I’ve Been Looking for You delivers a delightfully innocent piece of rock’n’roll fun – hand claps optional but recommended. Country-rock banger Just About Gone is the only hint of weariness that Adams lets slip; but the tumbling litany of the chorus has plenty of fight left in it yet. At its weakest it’s lyrically twee; at its best it’s a stadium-full of energy exploding out of the recording booth. Adams has been in the game long enough to know what works for him and his fans, and he ain’t about to start messing with it. Jessie Cunniffe

This extraordinary collection of art songs is a winner at so many levels: conception (pandemic-inspired focus on climate change), new commissions and gorgeous works, all ravishingly performed. Soprano Renee Fleming, a titan of her generation, may have left opera behind, but her genius in this most intimate musical form is undiminished. The title refers to this human-dominated geological age, and the songs concern our interaction with nature. “This music begins in a time almost two centuries ago when people had a profound connection to the beauty of nature,” says Fleming. “Now in the Anthropocene, we see the effects of our own activity and the fragility of nature.” There are exquisitely delicate French songs by Hahn and Faure, German songs by Grieg and Liszt, and striking new songs by Kevin Puts (Evening), Nico Muhly (Endless Space) and Caroline Shaw (Aurora Borealis). Each is very fine, especially Muhly’s, with its powerful text. One hint of criticism is that Fleming concentrates on musical line at the expense of diction. Pianist Yannick Nezet-Seguin, better known as music director of New York’s Metropolitan Opera, is for the most part a sensitive accompanist. Barney Zwartz