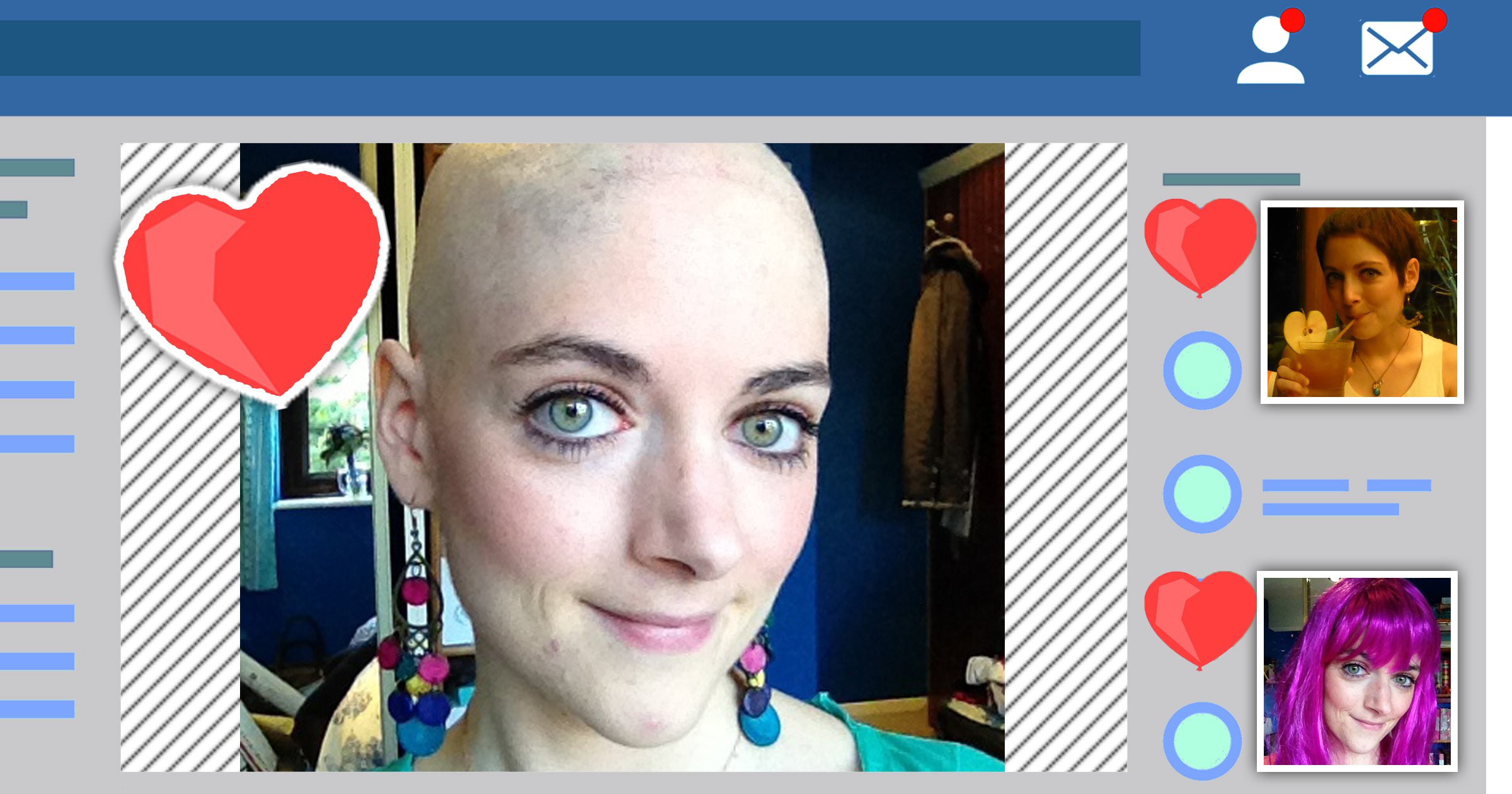 Would you have the guts to be completely honest on your dating profile? After she was diagnosed with breast cancer, Laura Price did just that.

‘Ten years ago, I was diagnosed with breast cancer. I’d found the lump while working as a financial journalist in South America. I’d been told it was a hormonal cyst and that I was too young for cancer, but after moving to Dublin for a new job, I decided to get it checked once more. Four months after I discovered the lump, I finally heard those words: ‘it’s cancer’.

I was 29 and in the best physical shape of my life. I’d taken up running after a break-up a few years earlier, and had recently run my first marathon. I didn’t smoke, wasn’t obese and didn’t drink a lot – all high-risk factors for cancer. But I’d been under stress from my fast-paced job throughout my twenties, and my gran had had breast cancer young too.

Recently single, I returned home to live with my parents in Huddersfield while I had surgery and chemotherapy at the Christie hospital in Manchester.

Over the long, hot summer of 2012, I watched as my friends posted photos of their holidays, weddings and baby scans. I felt pretty miserable scrolling through Instagram when I could barely get out of bed, but I knew I’d rather be single than have to think about sex while I navigated a scarred breast, hair loss and constipation from chemotherapy.

Believe me, there’s nothing less sexy than cancer.

By Valentine’s Day 2013, I was ready to date again. I’d returned to my job in Dublin and was finishing a course of radiotherapy. I should have been elated that my treatment was ending, but instead I felt lonely and numb.

I barely knew anyone in this new city after spending my twenties in London and Latin America, and I wanted to find ‘my person’.

Dating apps weren’t really a thing then, so I created my profile on one of the traditional sites. I included a selection of photos of me with my bald head alongside pics of my long brown hair and sporty figure before cancer.

I didn’t see the point of lying in my profile – I couldn’t imagine anything worse than having a guy run his hand through my hair in the throes of passion, only to realise it was a wig. So I wrote the truth, mentioning that I was bald and that chemo might have left me infertile.

After a few hit-and-miss dates including coffee with a chap whose opening question was ‘what is chemo like?’ I met a kind man who I’ll refer to as The Doctor.

The Doctor understood the ins and outs of cancer. I didn’t have to tell him that just because I’d finished my treatment, I wasn’t necessarily ‘cured’. I didn’t have to explain that I threw off the covers at night because I was having hot flushes, or why some days I lacked the energy to get out of bed.

The Doctor helped me to heal. Along with my eyebrows and eyelashes, cancer also took some of my confidence. I needed someone who didn’t look at me and see a bald head, but who saw me for me.

In the time I spent with The Doctor, my hair grew along with my confidence, and I’ll always be grateful for that.

But it didn’t work out with The Doctor, and over the course of my thirties I went from bad relationship to bad relationship. I didn’t know it at the time, but I needed someone who would build me up, because I was about to be knocked right down.

First there was the guy who thought the female orgasm was ‘a bonus’. Then there was the one who walked a few steps ahead of me in public and never introduced me to his mates.

Once, I walked into a restaurant with a man I’d been seeing for two months, only for a woman – a total stranger – to tell me how fabulous I looked. I’m pretty sure she could tell that the guy I was with wasn’t interested in me, and that I deserved much better. (Reader, I ghosted him after I discovered he’d been on Tinder at my house. And I did look fabulous.)

Anyone who’s been single in the time of dating apps will know there’s a surprising amount of people will happily do all the things that constitute being in a relationship, yet baulk at the mention of becoming ‘exclusive’ or – God forbid – appearing on each other’s Instagram.

I was never knowingly rejected because of cancer.

It was always ‘you’re perfect on paper’ or ‘I’m not over my ex’. But as the years went on and my fertility dwindled, I started to wonder if these guys had concluded that I wasn’t worth pursuing because I’d never be the mother of their child. (As it happens, I was still fertile, though perimenopause meant I would find it more difficult to conceive.)

I navigated Plenty of Fish, Tinder, Bumble, Hinge and an obscure app called Coffee Meets Bagel. I dated men I met at weddings as well as those I met online. While I gelled with some, the majority left me wishing I’d stayed at home with my cats. My experiences even sparked the idea for my debut novel, Single Bald Female, where my protagonist, Jess, faces the double bombshell of breast cancer and a break-up.

As cancer became less obvious in my appearance, I mentioned it less readily too. In fact, I went the opposite way from the honest profile I wrote back in 2013, thinking that guys might be put off by my history.

But the conversation about cancer would always come up eventually, and the sooner we had it, the better things were. It was always best to be honest about my health, and to find out sooner rather than later if they had any issue with it.

I’ve often wondered whether, if I had mental health problems, I’d mention them in my profile as I did with cancer. I’m pretty sure I wouldn’t, as they’d be invisible. After all, dating profiles and CVs are all about selling your best bits.

But real love is about loving the whole package. It’s knowing someone’s flaws and loving them anyway. It’s loving them even harder for it.

I wasted so much time with the wrong guys that when the right one came along, I could barely believe this gorgeous, kind, intelligent man was into me. It turned out he felt the same way, and now every day he makes me feel like the most loved woman in the world.

Ten years after my cancer diagnosis, I’ve finally settled down with the love of my life and I’ll be happy if I never open a dating app again.

But I don’t regret my decade of dating after cancer, because it helped shape the person I am now. It helped me to see that it doesn’t matter if you’re bald, infertile or depressed. The right person will love the whole of you. And if they don’t? It’s their problem, not yours.’

Single Bald Female is out now.