Ukraine’s ambassador to Australia has issued an urgent plea to Australia to send more weapons and armoured vehicles to his country to fend off Russia’s renewed assault as he warned the precedent Russia was setting could have ramifications in the Indo-Pacific.

Moscow now says its goal is to capture the entire Donbas region in the east of the country and take the last remaining holdout in the port city of Mariupol to create a land bridge with Crimea. 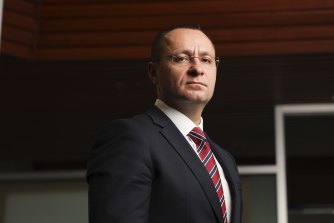 Australia earlier this month sent 20 Bushmaster armoured vehicles to Ukraine in its first major delivery of weaponry to help the country fend off the Russian invasion.

“Send more Bushmasters, send more anti-tank and anti-ship missiles. Send harpoons [missiles]. Send whatever you can. Because, look, time is very valuable here,” he told an event hosted by the Australian Strategic Policy Institute on Tuesday afternoon in Canberra.

Myroshnychenko said the problem for Ukraine was Russia has “complete dominance in the sky”, and this will only continue to occur as the war moves to the eastern Donbas region unless his nation receives more weapons from the international community.

“So we have these air-defence systems which only work around Kyiv and some other parts of Ukraine, but in many places we just have no protections against the cruise missiles, against all the Russian jets and other missiles and bombs which Russia is using against Ukraine,” he said.

“We need some heavy weaponry – we need jets, we need tanks, we need productive vehicles, we need heavy artillery, we need offensive weapons. We need some real stuff.

“Long-range missiles, we need more air defence systems. We need it all, I’m sorry, we just need it all.”

Myroshnychenko said the fact Ukraine has been able to resist the Russian invasion for so long has meant it is now only receiving significant support.

He also warned the precedent set by Russia successfully invading Ukraine will have consequences all around the world including in Australia’s region.

“I think the fact that we’ve been able to resist in these two months is actually the reason why we’re getting the support now – because initially, there was no belief that the Ukrainians could resist for so long,” he said.

“So now we need it all to be able to defend Ukraine, to defend you actually, to defend all the values and freedom and democracy. We are there in the trenches for your people basically – because if we fall, the consequences we’re going to see globally will be enormous.

“The precedent that one country can take over another country by force – this is going to create a domino effect all over the world including here in the Indo-Pacific.”

Russia’s Foreign Minister Sergei Lavrov this week warned Ukraine against provoking World War III and said the threat of a nuclear conflict “should not be underestimated”.

Myroshnychenko said Russia was using the threat to try to instil fear into Ukraine and the international community, but he did not rule out [Russian President Vladimir] Putin resorting to using them.

“The fact that Putin is talking through international media and he is specifically mentioning that – it is used as a way to instil fear and to frighten,” he said.