Australian War Memorial director Matt Anderson has conceded there will always be critics of the $500 million expansion of the national landmark whose minds cannot be changed.

Dozens of eminent Australians sent an open letter to Prime Minister Scott Morrison on Thursday warning the redevelopment would damage the site’s values. 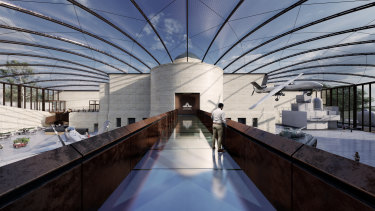 An artist’s impression of the expanded Australian War Memorial. Credit:

The plan, supported by both major parties, would demolish the award-winning Anzac Hall, expand exhibition space by about 80 per cent with galleries for modern conflicts, and add an underground car park and entrance.

Quizzed about the letter in Senate estimates late on Monday night, Mr Anderson said AWM had repeatedly engaged with many of its signatories throughout several consultation phases.

"There are some people whose views we won't change and that's okay," he said. "They are absolutely entitled to their views but I just don't happen to share them."

But he disagreed with Greens senator Jordon Steele-John's view that there was growing opposition to the expansion plan.

Those who signed the letter include two of Mr Anderson's predecessors as AWM director, Brendon Kelson and Major-General Steve Gower, former head of Defence Paul Barratt, and eminent historians and architects.

One criticism of the expansion has been a perception its main purpose is to allow the display of "big things" such as tanks and planes, some of which have not been used in combat.

While AWM had decided in broad terms what the new galleries would be about, Mr Anderson said it had only just started consulting people about what should be in those exhibitions and what stories should be told.

It would be guided by the military first, then veterans groups, and finally the community and museum groups, he said.

The most important news, analysis and insights delivered to your inbox at the start and end of each day. Sign up to The Sydney Morning Herald’s newsletter here and The Age’s newsletter here.