The unapologetically Latin, queer and female storyline of the hit show “Vida” has portrayed an image of America that the show’s creator felt had long been missing from TV.

Tanya Saracho, the Mexican-American playwright, actress and creator of “Vida,” told ABC News part of why she came up with this show was to bring authentic representation to television that she never had growing up.

“To now be part of the re-injecting us back into that narrative,” she said, “it feels really powerful.”

The show focuses on two sisters who are forced to return to their childhood home in East Los Angeles after their mom’s death. The story follows their chaotic lives, grief and bigger problems with themes of sexual identity to gentrification.

Saracho said the show’s power comes from those who create it behind the scenes. 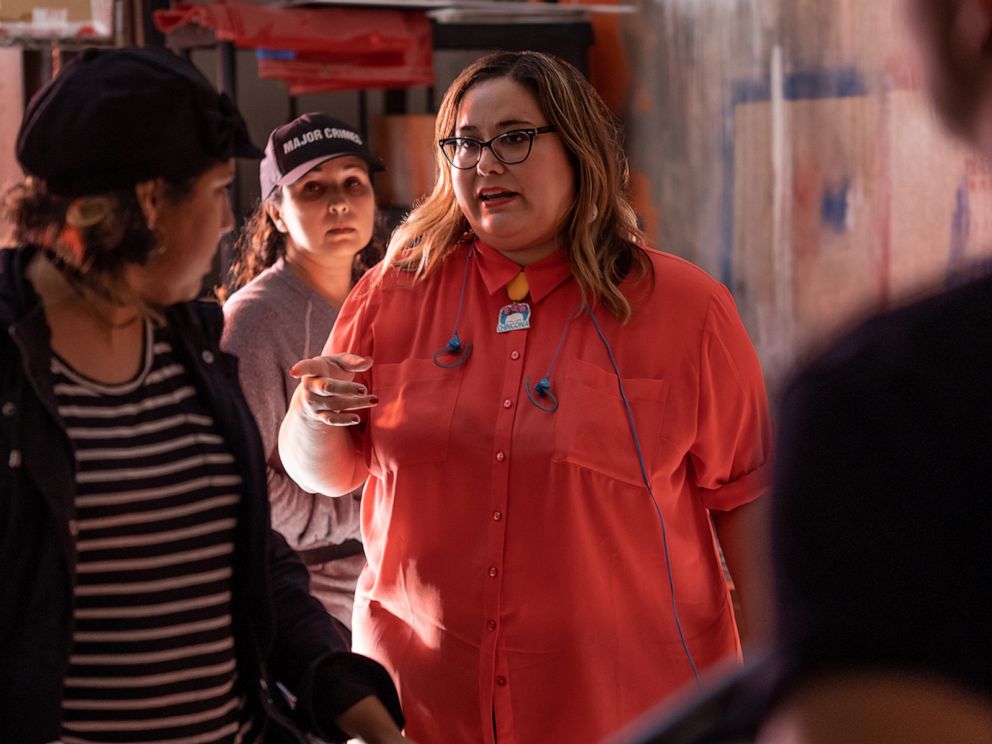 “The way we’re building the show starts as letting me build it how I want it, you know, with the right people behind the scenes and in front of the scenes,” she explained. “It feels like it’s handled correctly from an insider’s point of view.”

In order to inject that level of authenticity, Saracho said she has hired mostly LGBTQ women of color to work on the project.

“My writer’s room is all Latinx,” she said explaining that it is a “gender inclusive term” unlike “Latino or Latina.”

Saracho said she believes this is “the first time” all of the directors, editors and department heads have been “all women, all brown women, all Latinas.”

“It’s something I’m very proud of.” 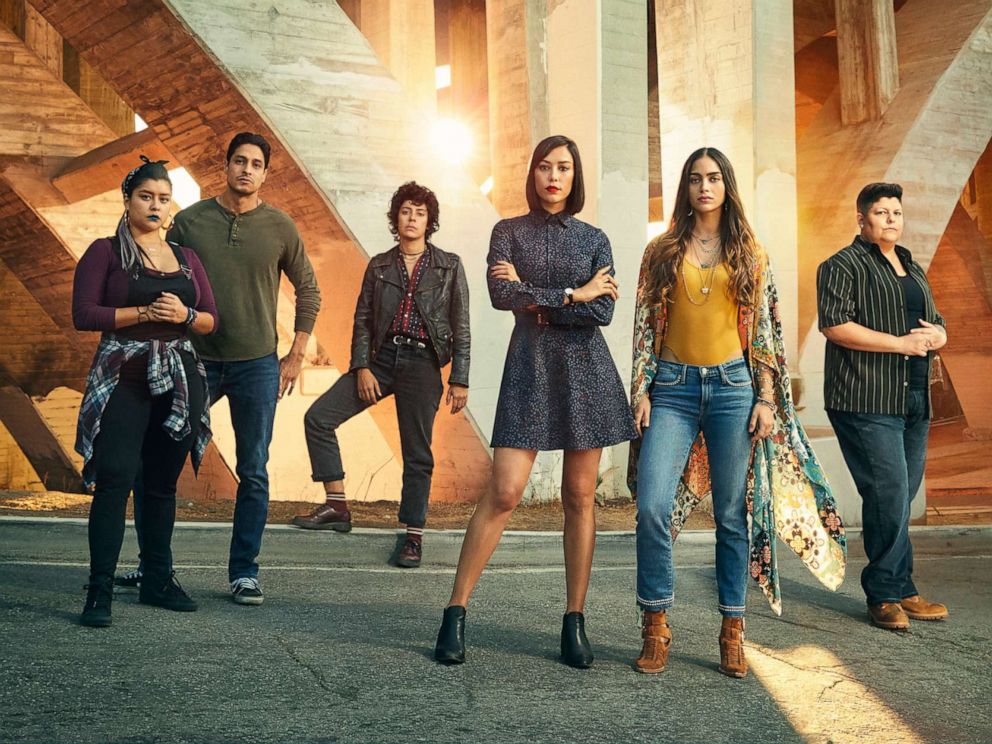 Her female-forward ambition came on the heels of an industry-wide dilemma around the lack of diversity and opportunity in Hollywood.

According to a study from the Annenberg Foundation that examined inclusion in the directing of 1,200 popular films, only four percent – 46 total — of the directors were women. Of those, only four were black, two were Asian and only one was Hispanic.

Many people in the industry have spoken out, such as with the “Oscars So White” hashtag, and beckoned a plea for inclusion.

Saracho felt it was important to give those directing opportunities to women of color who she said “don’t often have an in.”

“I think half of the Latinas this season we have to give their first TV shot. It’s really hard to get into this industry,” she explained. “And it feels a little bit like a responsibility if I don’t open the door to the castle then, you know, we might not get in it.”

“We don’t often have an uncle you know a godfather or you know someone who’s opens that door,” she continued.

When Saracho decided to leave her playwright career in Chicago and move to Hollywood, the “Vida” creator faced a daunting reality for Mexican-American women.

“I wasn’t prepared mentally emotionally,” she said candidly. “Also, culturally, I didn’t understand what it was to be in a writer’s room and pitch in person and also be the only person of color.”

She called her agent at the time, who told her he “didn’t want to worry” her, but ultimately, she said “it sort of tainted the whole experience.”

“This is your role, but you’re also the only person of color. You know one of the only women you’re just new to it. It was rough,” she explained.

Saracho went on to write for shows like “How to Get Away with Murder” on ABC and later HBO’s “Looking,” where she made an appearance as an actress.

In 2016, her idea for “Vida” became a reality. Her first TV show is now heading into its third season on STARZ.

What she has done with the show has been seen as “radical,” which Saracho said, frankly, is “sad.”

“It’s sad because the content is the thing we haven’t seen before. And that’s the way we’re making it,” she explained.

“Vida” is not the first show in the industry to be more inclusive. “Atlanta” has an all African American writer’s room and “Queen of the South” is all Latinx.

“We’re being inclusive and also, because what I’m doing is exclusive too, I’m saying only Latinx,” Saracho said. “It’s a radical thing to get to build your own story, which it shouldn’t be — but we’ve been told our own stories by other people, by the dominant culture, for far too long.”

“So it seems radical, but it feels — like the thing that makes the most sense,” she added.

The stars of the series have found the cultural and gender nuance to be revolutionary.

“You get to work and you get to do what you love and that in itself is a blessing and amazing, but to be a part of a show like ‘Vida,’ where you feel like you’re part of a movement, you’re representing your community and you’re telling a story that has never been told on TV before,” she said.

Chelsea Rendon, who plays Mari, expanded on the “amazing female empowerment” and said there’s “a bunch of women” who are “in charge.” 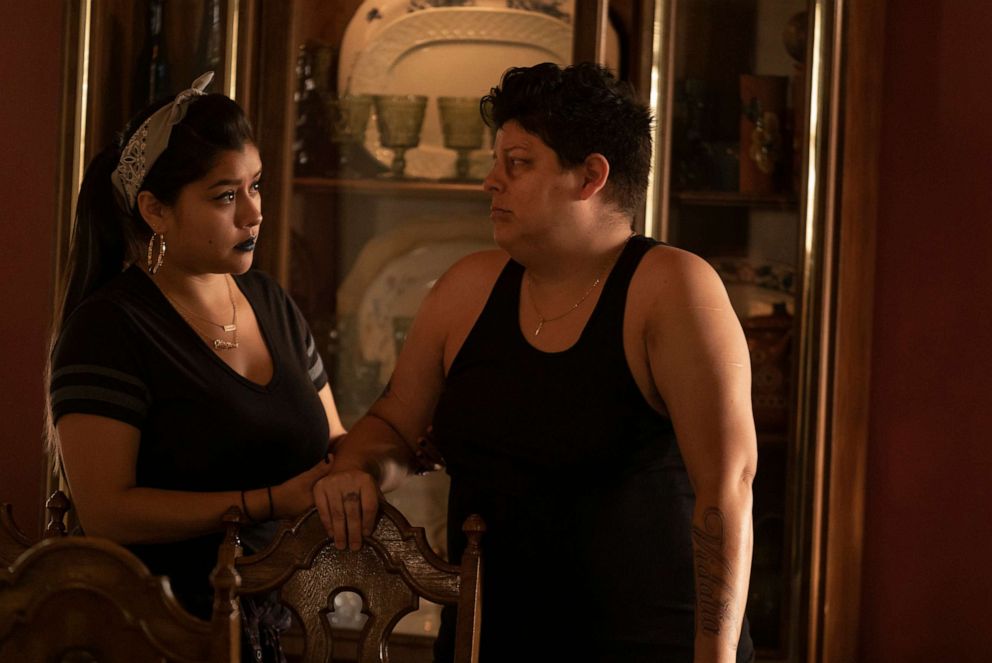 Among those women in charge is writer Jennifer Gomez.

“There’s something so special and unique when we tell stories that are about us right that feel close to home,” Gomez said. “Authenticity that we see on screen is unlike any other.”

Gomez explained that one of the authentic pieces “Vida” has successfully tackled is “the bilingual thing that we see on screen we haven’t seen before.”

“I do believe that there’s social change [that] doesn’t just happen on the political arena,” she added. “We’ve seen it so many times and I think that’s what this show can do.”

Esti Giordani, another writer on the show, said for her, “Vida” is “really indicative of the larger American narrative.” 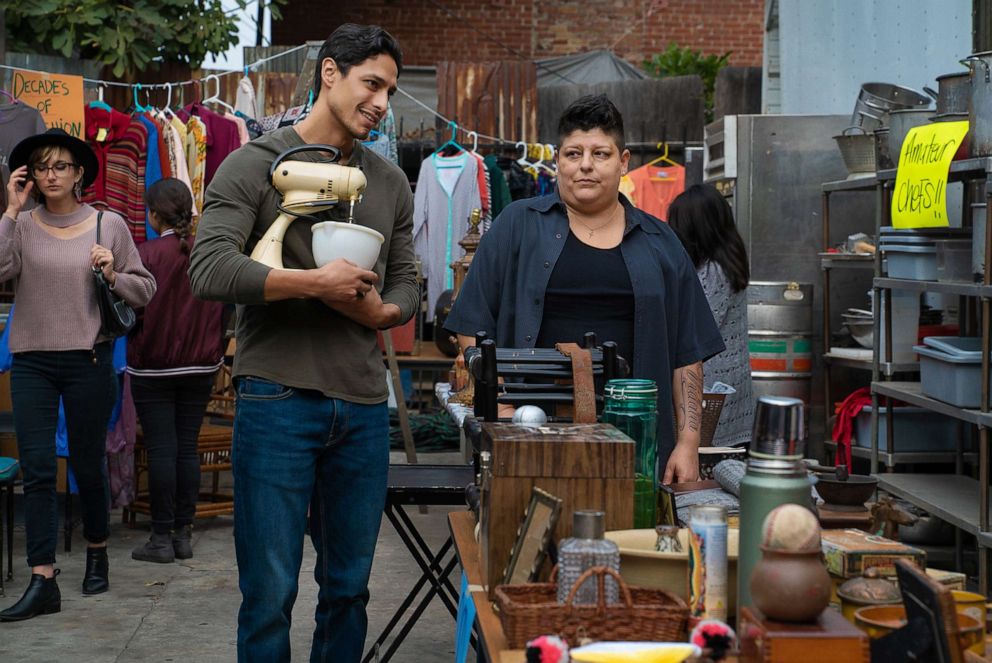 She said the show’s cultural specificity has been able to tap into universal themes.

“This is a perspective of what the American city looks like,” the former “Transparent” writer said. “This isn’t a narrative that is distinctly American and Latinx, and those things don’t have to be mutually exclusive.”

Saracho says that she hopes that the all-Latino cast doesn’t prevent audiences from tuning in.

“I do feel like some audiences are afraid of the otherness,” she said. “But I watch all sorts [of] shows — that are not just about me.”

Saracho has made it a priority to expose the complexities within the Latino community and purposefully put those who are often seen as minor characters front and center.

Ser Anzoategui plays Eddy in the show – the character is a butch Latinx lesbian that has clung to her late wife’s memory.

“I’m gonna cry,” Anzoategui said. “It was something that you always want as an actor to be able to act — And without the lines, without the character arc, you cannot fulfill your acting role.” 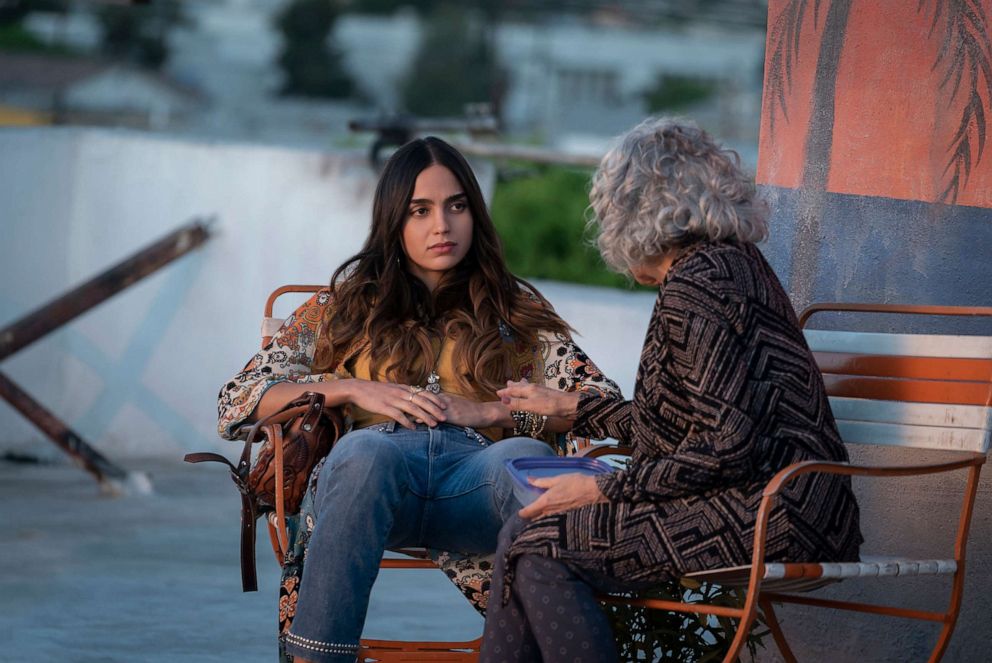 One of those arcs that plays out is when Anzoategui’s character becomes the victim of a hate crime in his own community.

Anzoategui, who identifies as gender non-binary, said that scene was “very triggering.”

“I know so many people in my own community who’s like have been killed and who’ve been beaten,” Anzoategui said, adding that majority of the cast and crew feel “so vulnerable, so naked” due to their similar experiences.

“It’s liberating to be able to work out all those triggers that come from personal experiences that come up through the acting process,” Anzoategui said.

The personal stories have blurred the lines between real life and art, which has given audiences a very real look into a world not ordinarily seen, all through a female gaze. 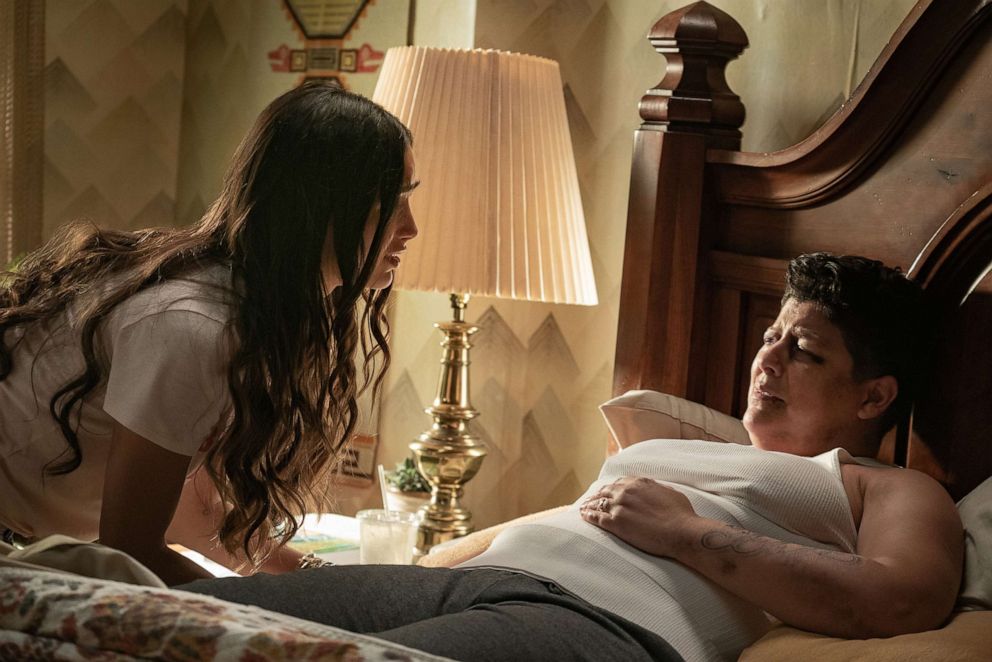 Rendon said it’s huge to have the opportunity to break negative stereotypes toward Latinos on television.

“That’s why the show is so important, to show that you can have a bunch of brown people and there’s no gang member and killing and this and this and that, it’s just human beings,” she said.

Mishel Prada, who stars as Emma, reiterated the importance of that exposure for other audiences.

“If you’re not exposed to these neighborhoods into these people and all you see is cheap labor or like sexy you know femme fatalities, or gang members, well of course you’re gonna be scared,” Prada said.

“You can see — people that are children of immigrants living in, and or, [coming] from — grandchildren of immigrants that grew up in immigrant communities, working [on] getting their college education, going out starting businesses, becoming activists, finding love,” Prada continued. “It creates this whole picture of what we are — And it’s important.”

Saracho said that the neighborhood portrayed in the show will be an invitation to audiences to see a world that is often seen “from the outside.”

An important aspect for Saracho was to allow those in the community to see part of themselves as worthy of being portrayed on television.

She explained that “especially from brown queers” the response to the show has been that “they’ve never seen themselves represented.”

“There’s something really magical that happens when you you’re looking and the recognition happens and it’s really alchemy. It’s a chemistry that goes through you, then it’s like, ‘Oh I exist, I exist.’ It’s so powerful,” she said. “So when you see that it’s like a big gift — I think that’s the best. When people say – ‘thank you for representing me.’”

Saracho continued, “it feels authentic, hopefully, because [of] the way is being crafted — by the people who look like that.”

“I don’t know if this is a movement or a moment,” Saracho said of the attention the show has received on and off-screen. But she does know that “the talent is here.”

“The stories are here, we just need the big gatekeepers, the big decision makers to realize that our stories are worth it,” she said. “That the world like an East L.A. brown queer world is worth it to represent — That’s what we just need for all of us to see us.”