‘I made this meal for 30p!’ Twitter users mock Tory MP with pictures of plate of ice, a single Shreddie and a cheese cracker – after he said Britons struggling to feed their families can’t cook or budget

Furious Twitter users have been left mocking a Tory MP who sparked fury after saying Britons should ‘be able to feed themselves on 30p’ a day.

Ashfield MP Lee Anderson Anderson, who earns £84,144 a year as an MP, caused uproar after he claimed that Brits ‘can’t budget’ and there was ‘not this massive use for food banks’ in Britain.

He also offered an invitation for Opposition MPs to visit a scheme in his own constituency that represented ‘a real food bank’ and allowed people to ‘make a meal for about 30p a day’.

Mr Anderson, a former Labour councillor who defected to the Conservatives prior to his election to Parliament in 2019, faced immediate anger in the House of Commons.

He was berated for his ‘crass and cruel’ comments as Britons up and down the country face a cost-of-living crisis due to soaring prices, and provoked the row as he spoke in a Commons debate on the Queen’s Speech.

Many Brits took to social media to slam his comments, and mockingly suggest the different ‘meals’ they could afford for 30p from their local supermarket. 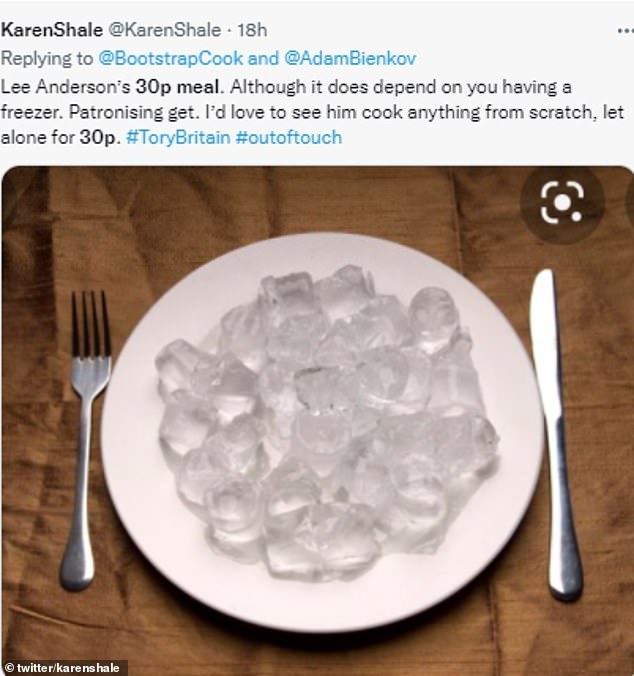 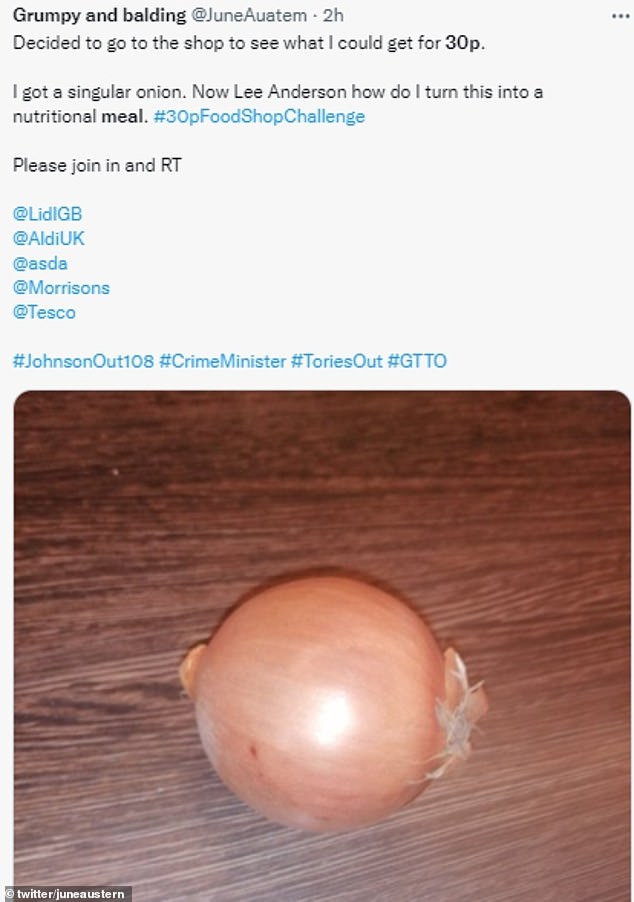 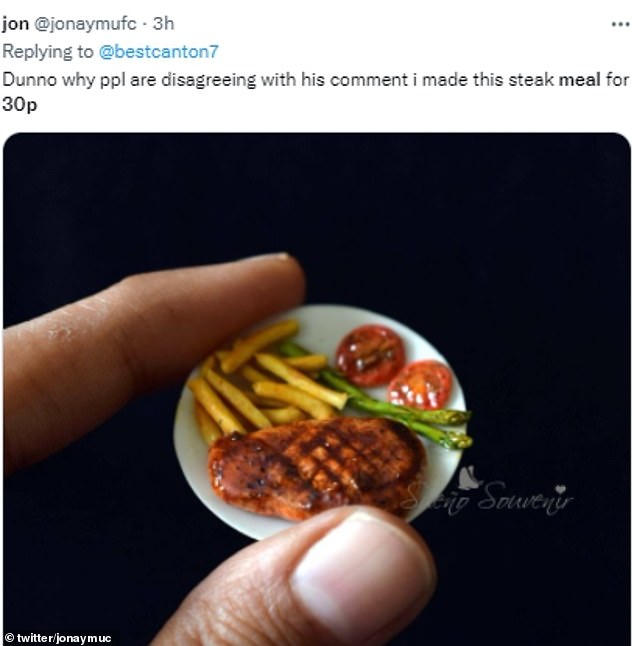 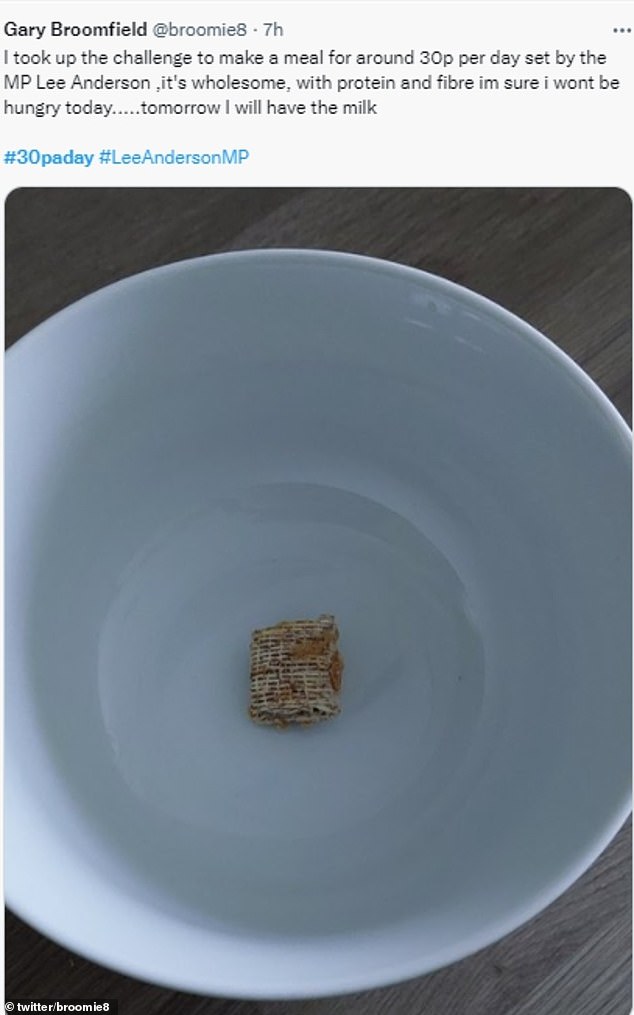 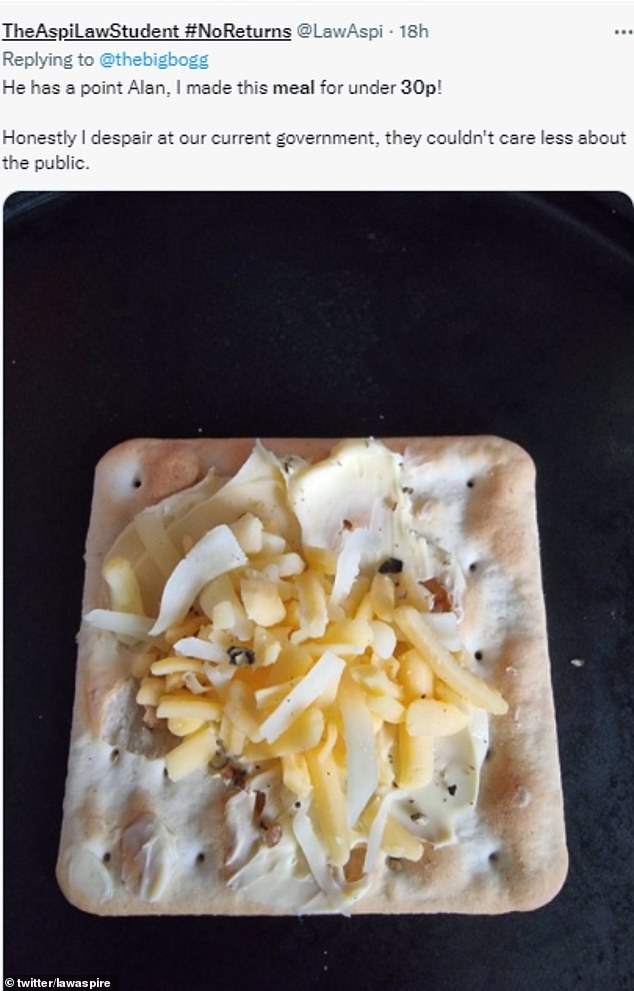 One shared a photo of a single Shreddie in an empty bowl, writing: ‘I took up the challenge to make a meal for around 30p per day set by Lee Anderson.

‘It’s wholesome, with protein and fibre. I’m sure I won’t be hungry today…tomorrow I will have the milk.’

Meanwhile another posted a photograph of a single cracker with shredded cheese on top, writing: ‘He has a point Alan, I made this meal for under 30p.

‘However I despair at our current government, they couldn’t care less about the public.’ 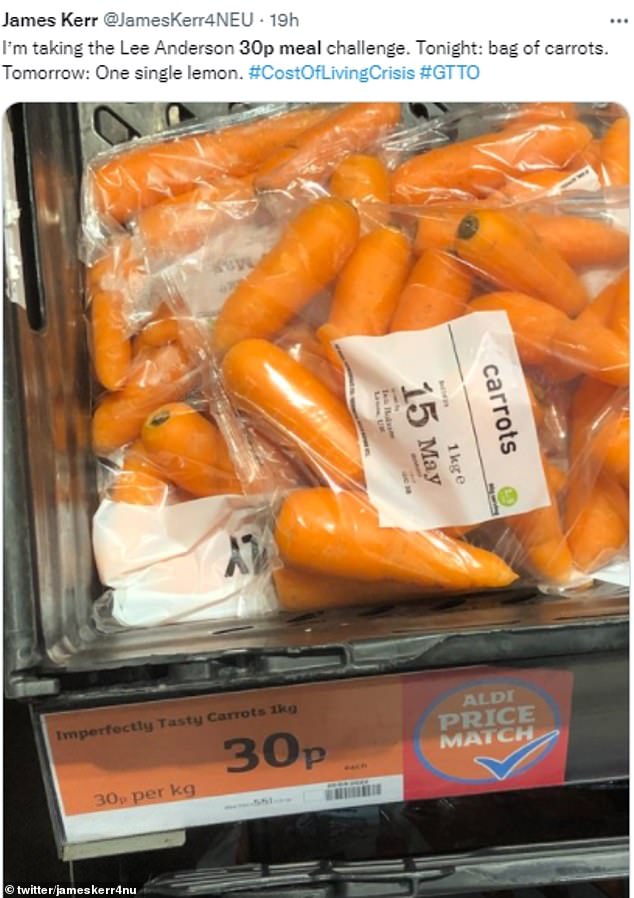 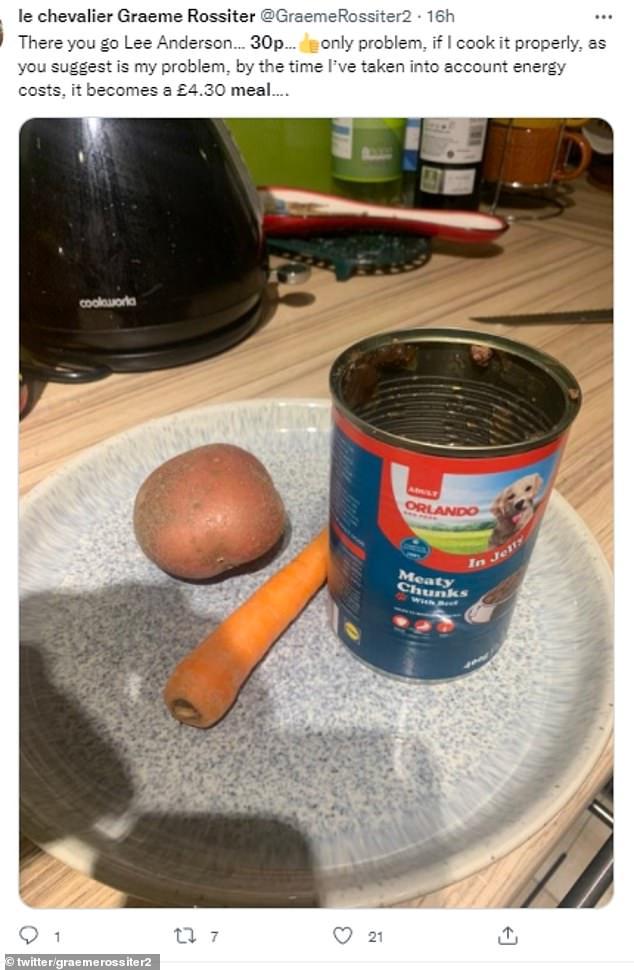 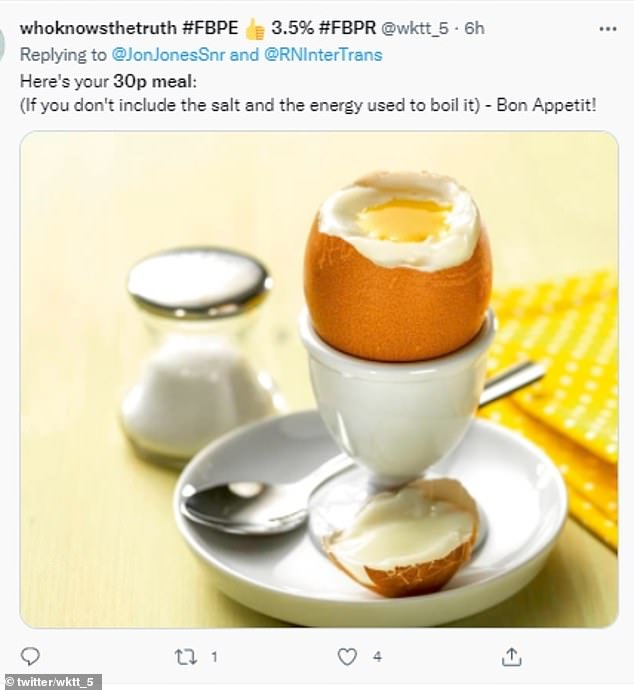 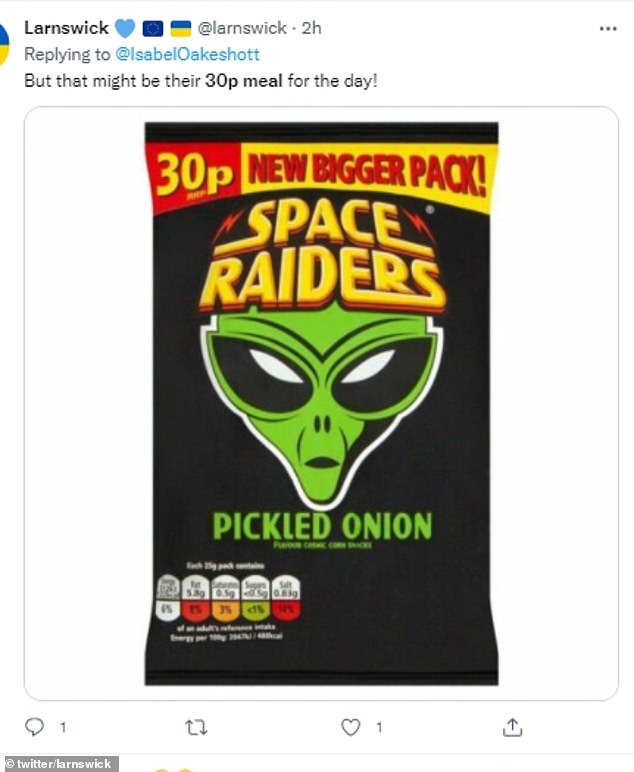 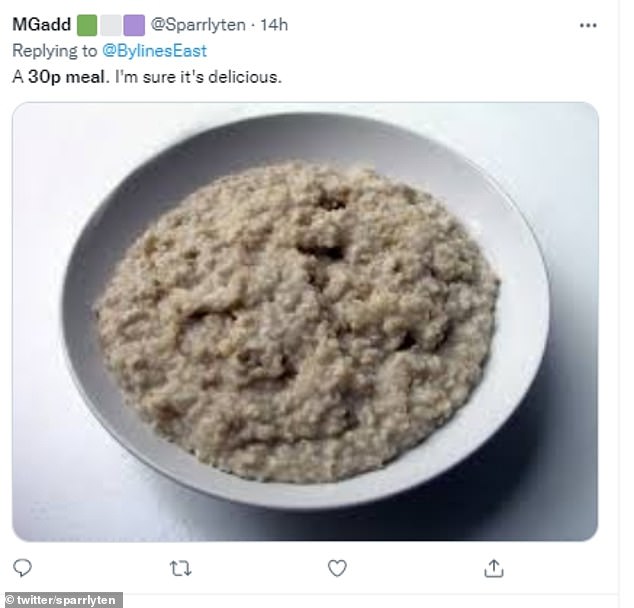 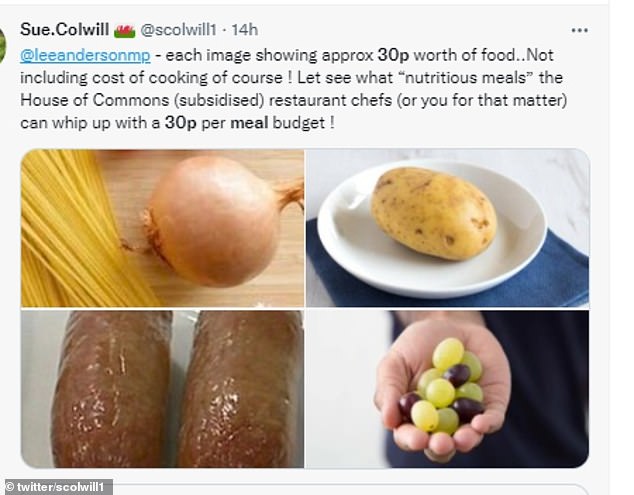 Other Twitter users went on to share snaps of their ’30p meals’, including a bowl of porridge and a handful of grapes

A third shared a photograph of a tiny meal moulded out of clay, jokingly writing: ‘Dunno why people are disagreeing with his comment, I made this steak meal for 30p.’

A fourth penned: ”Decided to go to the shop to see what I could get for 30p. I got a singular onion.

‘Now Lee Anderson, how do I turn this into a nutritional meal.’

Posting a photograph of a 30p bag of carrots from Sainsburys, another person wrote: ‘I’m taking Lee Anderson 30p challenge.

‘Tonight: A bag of carrots. Tomorrow: One single lemon.’ 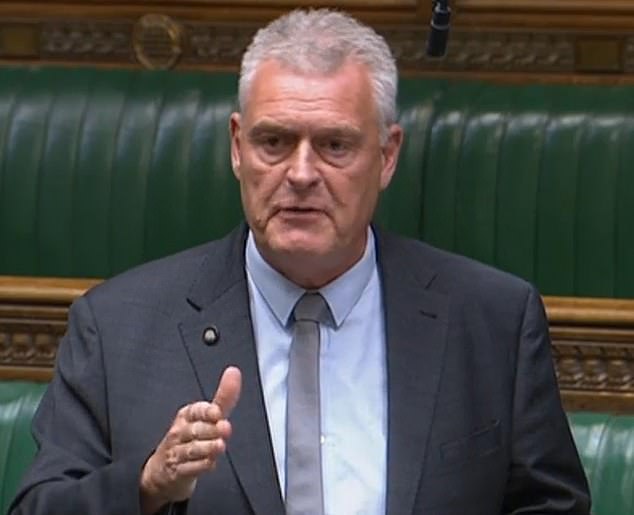 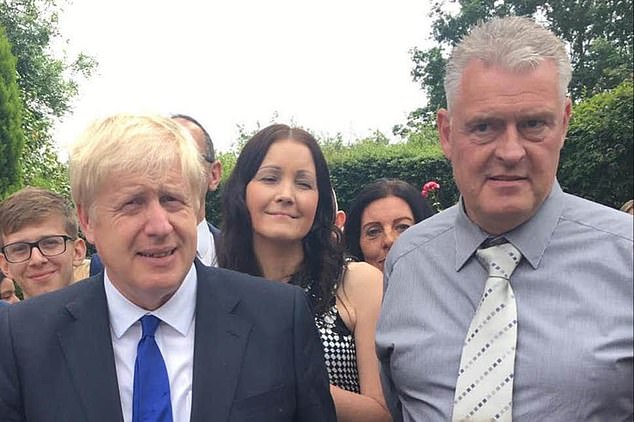 Another person posted a photograph of half-a-tin of dog food as well as a single carrot and potato, saying: ‘There you go Lee Anderson…30p.

‘Only problem, if I cook it properly, as you suggest is my problem, by the time I’ve taken into account my energy costs, it becomes a £3.40 meal.’

Addressing MPs on the Opposition benches, he urged them to ‘come to Ashfield and work with me for a day in my food bank and see the brilliant scheme we have got in place where when people come now for a food parcel, they have to register for a budgeting course and a cooking course’.

Lee Anderson is a former coal miner, ex-Labour councillor and a committed Brexiteer.

The 55-year-old describes himself as ‘born and bred’ in Ashfield, the Nottinghamshire constituency he now represents in the House of Commons.

After leaving school, he followed his coalmining father into the pits, where he worked for 10 years.

According to a biography on his website, Mr Anderson then volunteered at a local Citizens Advice bureau, worked in hostels for homeless care leavers, and took a job in a local MP’s office.

He also became a local Labour councillor after being a lifetime party member.

A 2018 local newspaper report detailed how Mr Anderson was subject to an investigation by his fellow Labour councillors.

It came after he was issued with a community protection warning after placing boulders to deter travellers from setting up camp at a local site.

Mr Anderson soon defected to the Tories and was later elected a Conservative councillor.

Not long after, he was elected to Parliament as MP for Ashfield in 2019 as part of Boris Johnson’s 80-seat Tory majority.

His Westminster election campaign provoked a row after he claimed ‘nuisance’ council tenants should be forced to live in tents and pick vegetables.

It led to accusations he was promoting ‘forced labour camps’.

Mr Anderson was also criticised after being caught out setting up a door knock while canvassing.

He was revealed to have told a householder ahead of his visit: ‘Make out you know who I am, that you know I’m the candidate but not that you are a friend.’

After joining the Commons, Mr Anderson made headlines again when he announced he would not watch England matches during the Euro 2020 football tournament.

He explained this was due to players taking the knee before matches in an anti-racism gesture.

The MP voiced his opposition due to the association of the gesture with the Black Lives Matter movement.

Last December, Mr Anderson was among Tory rebels to vote against ‘Plan B’ Covid restrictions.

‘What we do in the food bank, we show them how to cook cheap and nutritious meals on a budget,’ he added.

‘We can make a meal for about 30 pence a day. And this is cooking from scratch.’

Labour MP Alex Cunningham intervened to ask Mr Anderson whether he thought it ‘necessary to have food banks in 21st century Britain’.

Mr Anderson replied: ‘He makes a great point and this is exactly my point.

‘So, I invite you personally to come to Ashfield, look at our food bank, how it works and I think you will see first hand that there’s not this massive use for food banks in this country.

‘But generation after generation who cannot cook properly, they can’t cook a meal from scratch. They cannot budget. The challenge is there.

Noting the reaction of other MPs to his remarks, Mr Anderson added: ‘You’re sat there with glazed expressions on your faces looking like I’ve landed from a different planet.

‘Come, come to Ashfield, come next week, come the week after, come to a real food bank that’s making a real difference to people’s lives.’

The Trussell Trust charity runs more than 1,400 food bank centres across the UK.

There are also estimated to be 1,200 independent food banks in addition to those run by the Trussell Trust, Salvation Army and those based in schools.

Responding directly to Mr Anderson’s comments in the Commons, the SNP’s Joanna Cherry said: ‘All of us have food banks in our constituency.

‘We don’t really need to visit his because we’re perfectly well aware of the requirement for them.

‘But the requirement for them is not because people don’t know how to cook, it’s because we have poverty in this country at a scale that should shame his Government.’

Karen Buck, Labour’s shadow work and pensions minister, said: ‘In the world where people actually live we now hear daily stories of families going without food and others unable to turn their ovens on in fear of rising energy bills.

‘The idea that the problem is cooking skills and not 12 years of government decisions that are pushing people into extreme poverty is beyond belief.

‘Out of touch doesn’t even cover it.’

She posted on Twitter: ‘A genuinely astonishing comment from someone who represents an area with almost 30% of children living in poverty.

‘It would appear he has no clue of what life is like on the ground for so many of his constituents.’

Mr Clarke-Smith also highlighted a newspaper article from last year detailing how he and Mr Anderson had previously promoted a food bank’s efforts to show how it was possible to feed a family of five for seven days for £50.24.

The Sunday Express article quoted Mr Anderson as saying he had no pretensions to being a ‘great cook’ but that he does not mind ‘having a dabble’.

‘This is all about tackling food poverty. It’s about people having nutritious meals.

‘It’s about tackling obesity as well. If you’re going to eat nutritious meals, the chance are you’re not going to be overweight.’

Last summer, Mr Anderson refused to watch England’s games at Euro 2020 in protest at the men’s national football team taking the knee before matches in an anti-racism stance.

The MP criticised the gesture’s association with the Black Lives Matter political movement.