This just in: Travis Scott is still as smitten as ever with Kylie Jenner. That was my main takeaway from his new Rolling Stone cover story, anyway. In his in-depth interview with the magazine, Travis Scott’s quotes about marrying Kylie Jenner make it pretty clear that he has big plans for their future together. He also reveals some intimate details about his overall bond with Jenner, as well as his experience as a new parent with her. And guys, it’s a hopelessly romantic side of "the rager" we’ve only seen slivers of before.

“Rock-solid.” That’s the phrase Scott uses to describe his relationship with Jenner in the Rolling Stone interview. While he says at first they were just “two kids, f*cking around,” he explains that it quickly became clear there was serious potential there.

“Maybe, like, the first week, you don’t know if it’s real or a fling,” he tells Rolling Stone. “Then the second week you’re like, ‘Whoa, I’m still talking to her, she’s responding, I’m responding. We ain’t run out of a thing to say.’ And it got to a point where I was like, ‘I need her with me to operate. She’s that one.’ ”

In the interview, Scott praises his lady in more ways than one. Despite her high-profile celeb status, Scott explains, “people don’t understand how real my girl is. How ill she is.”

Travis Scott appears on our latest cover. Click the link in our bio to read the story in full. We hang out in Houston with rap's new superstar as he meets up with Kylie Jenner, talks Kanye, spends quality time his family and more. "I’m trying to make music in my room, and he’s in the den trying to make music," Travis tells us about his dad. "He had all this fire equipment he wouldn’t let me fuck with." Cover photograph by @DanaScruggs

Apparently, the duo instantly connected over their taste in film — specifically, a couple of eccentric directors with very specific visual and narration styles: Tim Burton and Wes Anderson. Still, he says that it was her chill nature that really caught his attention.

“I like to just go outside and walk,” he admits to the magazine. “Knowing a girl that famous, you’d think she’s like, ‘I need to go send somebody to do this for me,’ or ‘I need 15 motherf*ckers around me,’ but we just walk out the crib.”

Scott says he hates cameras and having people “in his business,” and was relieved to find that Jenner was “normal as possible.”

“I realized what really mattered to her, which is none of this sh*t,” he tells Rolling Stone. “She’s the coolest motherf*cker of all time.”

Yep, that pretty much says it all. The coolest motherf*cker of all time. #Swoon. 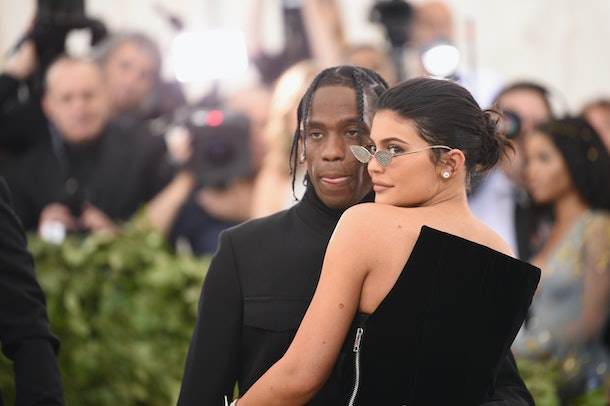 It’s not the first time Scott has sung Jenner’s praises, however.

The Houston-bred rapper gave his boo a shoutout on the opening track to his newest album, Astroworld. In “Stargazing,” he says Jenner saved his life. He also calls his baby mama a “trophy.”

And in a July 2018 GQ interview (the couple’s first photoshoot together), Scott says, “Kylie actually likes me for me."

In the same interview, Jenner was asked to share the most romantic thing Scott ever did for her. She relayed how on her birthday, Scott woke her up at 6 a.m. and ushered her downstairs.

“The sun was just coming up, and he had flowers all the way down his house and violin players everywhere,” she says, according to GQ.

Scott and Jenner’s relationship has taken serious strides since they first met at Coachella in April 2017. Talk about a whirlwind romance: After they initially connected, Jenner immediately left her life in Cali to hop on tour with Scott. And just weeks after they met, Jenner became pregnant with their daughter, Stormi, who was born in February 2018. The couple’s shared religious faith is something that came into play when Jenner got pregnant. Scott reveals in the Rolling Stone interview that when she told him the news, they agreed that it felt like something “special” — meant to be, if you will.

Back in November, Scott confused concert-goers in Miami when he announced to the audience: "I have my wife and baby backstage.” And while they may not have actually tied the knot yet, a source told E! News that they now frequently refer to each other as "wife" or "husband” regardless. So, if you’ve been eagerly waiting to see a giant rock on Jenner’s finger (c’mon, you know it’s going to be extra AF), Scott reveals in the interview: “We’ll get married soon. I just gotta sturdy up — I gotta propose in a fire way.”

BTW, in case all of that doesn’t have you melting, while the interview was being conducted, Scott was speeding down a Houston highway in the pouring rain just so he can see Jenner before her jet took off. After he finally pulls into a parking lot where Jenner has been waiting for him in a pink silk pantsuit, he hops in next to her and the two share a couple boxes of pepperoni pizza. And if that isn’t the definition of #couplegoals, I don’t know what is.