SOARING rail fares mean it's typically 50 per cent dearer to travel around Britain on trains than planes – as well as being far slower.

It is a blow for Brits wanting to reduce their carbon footprint – but can’t afford to pay over the odds for more environmentally-friendly rail travel, Which? said. 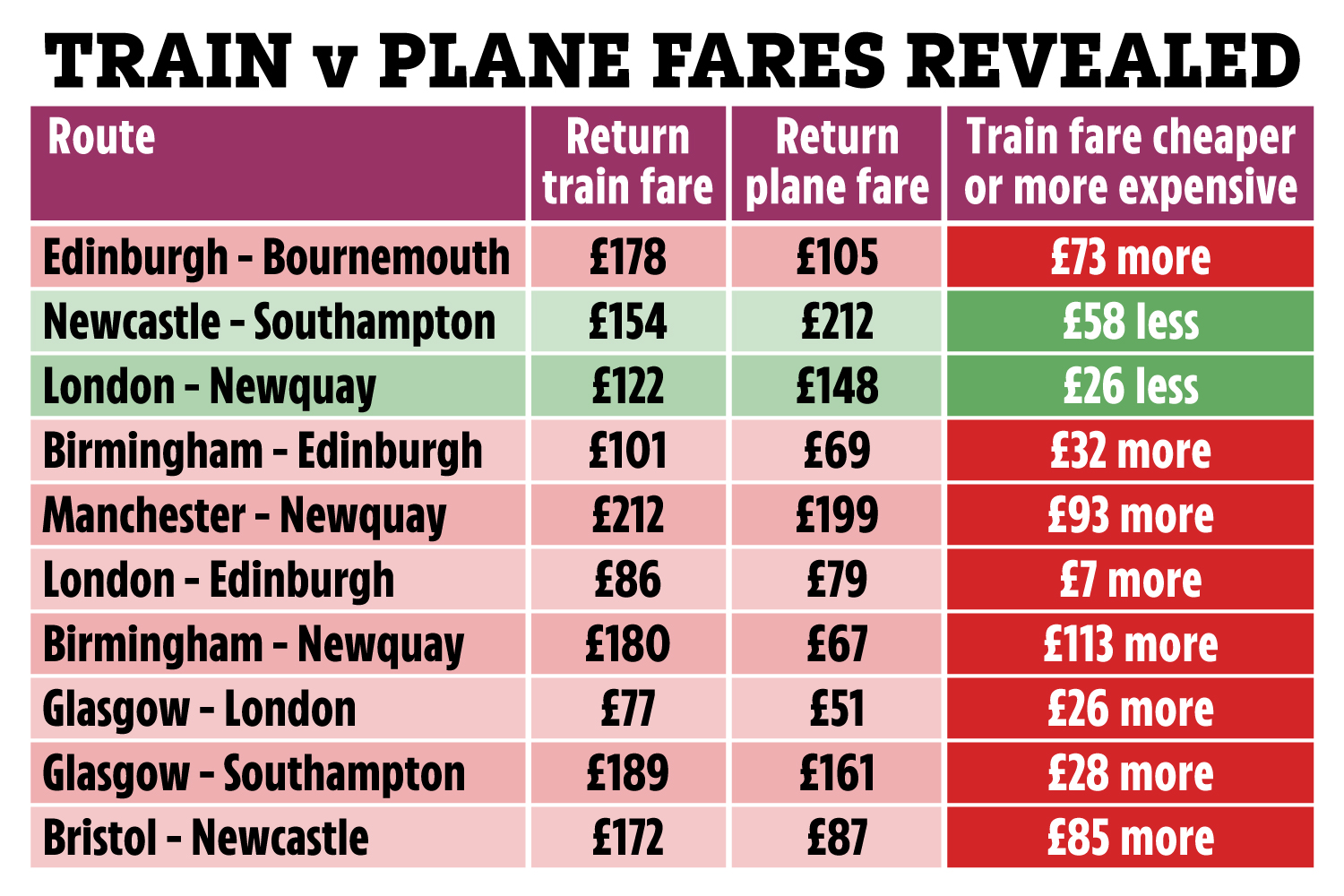 The biggest difference was for a return journey from Birmingham to Newquay. Flights were £67 and train journeys on the same dates were £180 – 169 per cent more.

Going by rail also involved making two changes and, including the return leg, would take more than 10 hours longer than flying.

Researchers compared costs on the same dates on 10 popular routes across the UK.

On eight routes it was more expensive to take the train – costing 49 per cent more on average than flying.

The biggest difference was between Bristol and Newcastle, with a flight emitting 203kg of CO2 per person and a train trip 33kg.

But it would cost twice as much by train, at £172 compared to £87 – and take six hours longer for the return trip.

The flight routes with the highest emissions were Edinburgh to Bournemouth and Glasgow to Southampton -at 287kg of CO2 per person each.

Edinburgh to Bournemouth by train would emit 52kg of CO2 per person – but the journey would cost £70 more than flying and take 14 hours longer.

Glasgow to Southampton by train was only £28 dearer, and would save 238kg of CO2 per person.

In response to more people travelling across the UK for their holidays this year, airlines have launched dozens more domestic routes.

Rory Boland, Which? travel editor, said: “As the pandemic continues to cause uncertainty for international travel, many of us are taking holidays closer to home this year.

"Travellers who choose to take the train face significantly higher fares and journey times, putting those who want to lessen their environmental impact at a disadvantage.

“There are steps that people can take to reduce the cost of travelling by train.

"Take the time to compare dates and times to see if cheaper fares are available, and look into what railcards you might be eligible for to save up to a third on train travel.

"You may be able to make further savings by checking if split-ticketing is an option on your chosen route.”

Train fares rose by 2.6 per cent in March this year.

And they are likely to increase by a further 3.3 per cent from January next year, the usual month rises kick in.

Annual raises in fares each January are based on the previous July’s rate of inflation, as calculated by the retail price index, which is announced in August each year. The figure for June was 3.3 per cent.

Such a rise would increase the cost of the average season ticket by £75 – and bump up the priciest ones by £300.

Here we explain how to cut rail costs.