John Wolseley, the quirky, British-born landscape artist is bumping his way along a bush track through the ironbark trees of the Whipstick Forest in Victoria in his Toyota Land Cruiser.

"Look at this, how anyone could call this barren?" he says in his deep, aristocratic voice. "This is one of the world's last, great wildernesses. In the spring, when the wattle blooms, the air is full of gold dust." 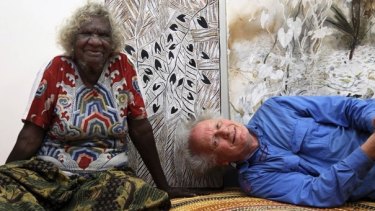 But then after more than 40 years exploring Australia's mountain ranges, floodplains, waterholes and remote escarpments, Wolseley has a much richer appreciation of our eco-systems than most.

The septuagenarian has had the privilege of exploring our wilderness in a way most of us never get a chance to. 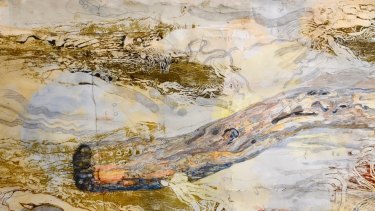 One of the thrills of his life remains packing up his camper truck with art supplies, water and food and making forays into some of the most remote regions of our vast interior and coastline. He stays for weeks on end, usually solo, in order to create the large, contemplative watercolours, collages or sketches that are hung in most major galleries.

The untouched quality of Australia, and his desire to show "the interconnectedness of everything in nature" has been Wolseley's muse since he first arrived here in the 1970s.

"In England there isn't a single piece of forest which has not been gardened or plotted, or left in its original state. Here, I could step foot onto land that no white artist had ever painted." 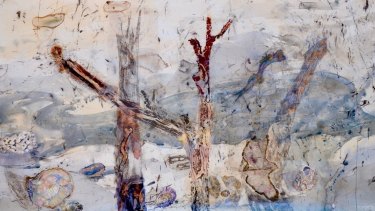 Animals, plants, and water courses continue to flow from his brushes, all aimed at creating "a kind of inventory about the state of the earth".

The love affair deepened five years ago at an artists' workshop in East Arnhem Land. There, staying in a humpy in Blue Mud Bay, he became friends with Yolgnu artist Mulkun Wirrpanda. The pair's installation of work about edible plants of the region, Midawarr/Harvest, was recently bought by the National Museum of Australia.

Now Wolseley has turned his unstoppable gaze to insects and molluscs on the Arafura Coast; 101 Insect Life Stories is one of three upcoming exhibitions in Sydney, Melbourne and Geelong.

Arriving at his studio surrounded by the Whipstick forest, Wolseley pats his cattle dog dozing in front of the slow combustion fire and threads his way among canvases, books, a bottle of champagne and empty coffee cups.

He taps gently on a collection of large glass bell jars containing botanical specimens that were the genesis of the insect exhibition. There's a tree branch carved by shipworms, termites, a wasp nest, rocks, clumps of moss and lichen, and pieces of bark with beetle engravings.

"When Mulkun adopted me as her spiritual brother, and gave me the name Langurrk, a type of grub which burrows in the mud, I felt mysteriously compelled to start making rubbing of their intricate journeys," he explains.

Some people might see these grubs – the larvae of beetles and moths – as arcane subject matter, but they fascinate Wolseley, and his rubbings of them have been incorporated into the paintings. "Each species engraves its own personal map under the bark of trees with a calligraphy or dance unique to itself."

Wolseley's insect exhibition involved a great deal of solitude; at first his voice sounds raspy, as if he has a sore throat. He reaches for a packet of Minties, explaining that he hasn't said a word for a week. "My throat needs a bit of warming up."

Time simmers slowly in Wolseley's world. Making a cup of coffee is a leisurely process that involves driving to one shed for the plunger, to another for the coffee, and finally to his studio to boil water.

But then making haste slowly is the key to the success of his artwork. He's prepared to spend days watching the tracks of a turtle in the sand, and hours on end sketching a particular rock, or a beetle's wing.

Like many artists, he's keenly aware of the way our landscape is being damaged by pollution and climate change. Rather than preach, his approach is to celebrate the power and beauty of the natural world in the hope that it opens our eyes to what is at stake.

His expeditions are difficult pleasures. Sometimes, he's able to tune into the landscape so much that he enters a kind of reverie. Other times he misses the company of his wife of more than 30 years, Melbourne curator Jenny Long. As well as hot shower, a glass of cold wine, and a good movie.

But at heart he is a nomad, and his feet will keep taking him back to the where the salt wind blows. "I feel a bit strange if I haven't been alone in nature for too long," he says, before doffing his bush hat in goodbye. "Tootle-oo!"