Can you EVER manufacture a sexual spark? Tracey Cox reveals 8 ways to turn the great match you ‘just don’t fancy’ into a lover (but says you shouldn’t have sex until at least the 5th date)

They’re funny, clever and kind. They get on with all your friends, you have the same tastes and share the same opinions.

Everything is just perfect…except you’re not entirely sure you fancy them.

Plenty of people stop at this point, believing if there’s no instant sexual attraction, it means the relationship is doomed.

So long as there’s strong connection in other areas, sexual attraction can develop over time. 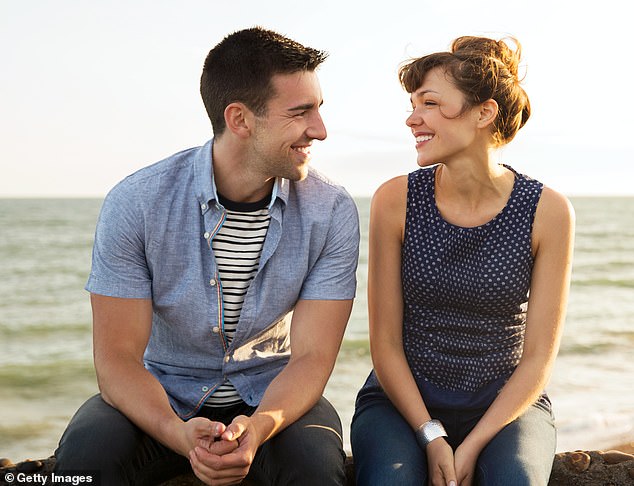 If you’ve met someone who is ‘perfect’ but you just don’t fancy them, don’t write it off just yet because there are ways to manufacture a sexual spark, says Tracey Cox (stock image)

In fact, while chemistry is a very powerful attractant, there are also good reasons NOT to place so much emphasis on it.

Being strongly attracted to someone doesn’t automatically mean they’ll be good for us.

People who have been abused, ‘click’ with people who abuse. They feel familiar – triggering that ‘I know this person even though I don’t know them feeling’ we’re all seduced by – because they share the same qualities their abuser did.

But if you’re always ending up in relationships where the sex is great but nothing else is, you’re giving sexual attraction too much of a star role in your choices. 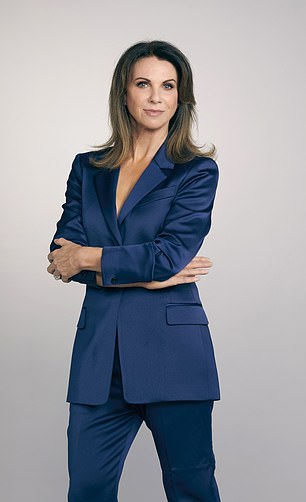 You can’t force sexual attraction – but you can give it space to grow and breathe.

If you’re with someone you like a lot (or think you might) but worry the spark isn’t there, it’s absolutely worth trying to create one.

GIVE IT AT LEAST THREE DATES

If you’re a bit shy, or they are, it can take time before you both feel completely comfortable around each other.

Take the pressure off at the start of relationships and just enjoy getting to know them. At the very least, you might end up with a good friend.

Keep it casual. Invite other friends along, simply go out into the world together and then see how you feel as time progresses. ‘I’d always got on really well with a girl from work but didn’t think I fancied her,’ one 28-year-old man told me. ‘Then I invited her to a party of a friend of mine and he started chatting her up. I watched them and suddenly realised just how attractive she was, even though she wasn’t my ‘type’. I felt insanely jealous.’

They’ve been together, very happily, for two years now.

Don’t write people off just because they don’t tick all your boxes initially.

Real attraction takes time: many potentially fantastic relationships are cut off at the knees and never given a chance to grow because people expect instant connection.

DO SOMETHING THRILLING TOGETHER

You might have heard of the ‘love bridge’ experiment: a controversial psychological study carried in the early 70s.

Men crossing a rickety, unsafe-feeling bridge were approached by an attractive woman who asked them to fill out a survey.

The handrails were low, it swayed and there was a big drop to the river below.

As the men completed the survey, the woman gave her phone number and said they could call her if they wanted to know more about the study.

In other words, providing an excuse for them to call and pursue her.

Meanwhile, men crossing another bridge were also stopped by a female researcher halfway across.

But this bridge was secure, didn’t sway and was only a few feet above a stream.

They could also call her afterwards to find out more information.

On the stable bridge, only two of the 16 participants called the woman. On the unsafe bridge, nine out of 18 called.

The researcher’s conclusion was that men on the rickety bridge felt stressed and jittery – kind of how you feel when you’re attracted to someone and aren’t sure if it’s reciprocated.

That fear then turned into attraction.

The conclusion has been subsequently questioned but there is no doubt that doing activities that provide an adrenaline boost do create a stronger bond.

Think skydiving, seeing a horror movie or heading to a theme park to ride a rollercoaster.

Can sexual attraction be created or does it have to be there right from the start?

When I posed this question on social media, I expected the verdict to be strongly in favour of the latter.

‘Sexual attraction is about effort and putting in the work rather than happening upon the ‘right’ partner.’

‘Sometimes, it’s created when you’re in the right setting. A dinner where everyone is dressed to impress. Or a holiday or weekend away where everyone drinks a little too much and inhibitions are dropped.’

‘It can emerge over time. It might always have been there, but you only realise it after several months. It suddenly ignites when you find out you both have the same interests. ‘So you’re into that too!’

‘I think for women, sexual attraction can easily be created if a man’s personality and behaviour shines. I don’t think it works the same way for men though.’

LOOK FOR OTHER CONNECTION POINTS

‘I can go from no interest to attraction, if I get to know the person and they’re intriguing, interesting and engaging,’ a woman told me on social media. ‘Personality and connection can definitely make someone hot.’

Most psychologists agree there are five key areas that appear to make or break a relationship.

Chemistry (does it feel right?), compatibility (how much do you have in common?), common goals (how many do you share?), pace (are you moving at the same speed through life?) and timing (are you at the same stage in your lives?).

Couples who remain blissfully bonded for life tend to connect on all five. But those who match on three or four still enjoy very happy, satisfying relationships.

If chemistry hasn’t been ticked, what about the others?

If you can laugh together, sexual attraction may not be far behind.

We’ve all done it: judged the couple where one person is way more physically attractive than the other, then completely changed our minds once we realise just how funny they are.

Having discussions about sex will give you a window into what sort of lover they might be.

Make up a story about a fictitious friend’s sex life and have a gossip about it. See how they respond.

Ask how sex was in their past relationships (go on – be brave!), talk about a new sex trend or something you’ve seen on social media. Ask them to tell you the sexiest films they’ve ever seen.

But don’t have sex just yet!

Have sex too early with someone you’re not entirely sure about it and you’re virtually ensuring it won’t succeed.

Sex with someone we barely know only ever works if there’s a strong sexual spark.

Familiarity breeds lust: the more time you spend with someone you like, the more likely you are to find them attractive.

There’s a reason why relationships that start online have a high success rate. If you’ve already invested time and effort to get to know the person, you feel a sense of commitment before you even meet and are far more likely to give it go, even if in-the-flesh chemistry isn’t that high.

Grab their arm as you’re walking along the street, snuggle on the sofa if you’re watching something.

Touch is a powerful connector. The more someone touches us – in a non-threatening, inoffensive way – the more appealing they become.

Everyone has an ‘attraction spectrum’ – 10 meaning you’re highly attracted to someone and one meaning you feel no attraction at all.

If you date ‘high’, attraction happens in the fraction of a second. You’re high on infatuation and lust but don’t yet know if that person is a good match on any other level.

Not surprisingly, immediate attraction isn’t the best forecaster of future happiness or even passion. It can blind us to red flags and glaring negatives.

Intense connections tend to fizzle out fast – mainly because they’re exhausting. Going out with someone you find ridiculously attractive rarely feels comfortable or secure. You have too much to lose.

Date too low on your attractiveness scale and you’ll feel no romantic or sexual attraction no matter how many other boxes you tick.

Date people who are mid-range – you’re attracted but wait to see if there are other appealing qualities to go with it – and you’re on a winning formula.

That’s when you end up at the ‘sweet spot’ with a combination of personality, emotion and physical attributes that will keep you both happy and interested long-term.

This is why dating experts recommend you touch three times, for three seconds each time, on a first date.

Safe places to start are on the hand and forearm.

As things progress and the friendship builds, try a palm rested on their lower back. This adds sexual tension but isn’t too forward.

If you want to up the ante, kiss hello on the mouth instead of the cheek, pull back and hold eye contact for a second or two, then go back in for another quick kiss.

GO FOR A CANDLELIT DINNER

The role eyes play in couple connection is extraordinary. They’re nicknamed ‘the gateway to love’ for good reason: eye contact directly influences whether we’ll fall in love or not.

The more we like someone, the longer we lock eyes with them and the more likely the brain is to produce PEA (phenylethylamine) – a substance released when we fall in love.

The more PEA floating around in your system, the more likely you are to fall in love with someone.

Going out to dinner puts you across the table from someone: constant eye contact is pretty much impossible to avoid.

Going somewhere where light levels are low, offers another advantage.

Our pupils dilate when we look at something we like or love – consequently, we’re instinctively attracted to large pupils.

Italian women in the 18th century put tiny drops of belladonna (an extract from the deadly nightshade plant) into their eyes to artificially dilate their pupils and make them more attractive to others.

A good old-fashioned candlelit diner doesn’t just soften our faces, showing off our looks to best effect, it shows off our pupil dilation as well.

The less light, the bigger the pupil.

Gaze at each other in this environment and it can tip the relationship from friendship into something romantic.

‘I met my now husband when I was recovering from a serious illness,’ a 40-year-old woman told me. ‘I have a very specific type and he was completely the opposite to what I usually go for. But he was gentle and kind and I felt vulnerable.

‘I liked him – a lot – but I wasn’t physically attracted. After two months, I was certain it was just friendship and didn’t think it was fair to lead him on anymore. I told him it would never work romantically and gave him a goodbye kiss on the lips. He grabbed my face and kissed me properly. And just like that, I was in love.’

Kissing someone for the first time is a pivotal moment in any relationship. If someone kisses well, we assume they’ll be good lovers. If they don’t, we assume the opposite.

There are also evolutionary reasons why we kiss: those first kisses are the equivalent of exchanging biological business cards.

If you aren’t, you won’t taste or smell right to each other.

The other reason is that kissing triggers the release of the bonding hormone oxytocin which makes you feel more connected.

Take a deep breath and pucker up: it will be the litmus test and probably tell you everything you need to know.

Looking for something other than socks for your significant other? Check out Tracey’s product ranges at lovehoney.co.uk or on traceycox.com.