The dog that ripped open Guy Ward’s arm soon after he’d finished his laps at Nunawading swimming pool last Tuesday attacked twice before it was brought under control by its owner. The owner apologised to Ward, and then wandered off while pool staff called an ambulance.

In its first attack, the dog clamped hard onto Ward’s elbow. “It was maybe a minute or so before it could be got off,” said Ward, who would later be told by a surgeon that the dog had separated the tendons in his arm. 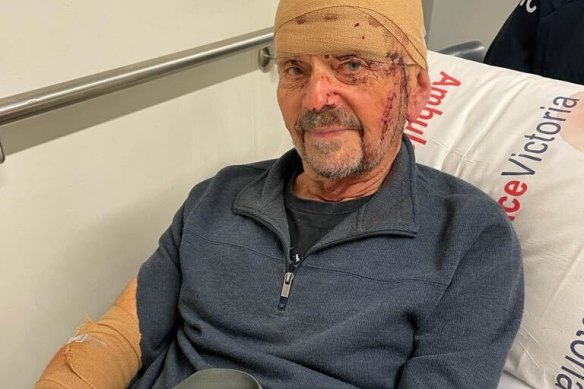 Guy Ward in Box Hill Hospital immediately after a dog attacked him in Nunawading.Credit:Ward family

In its second attack, the dog brought Ward to the ground with a bite to his knee. “Then it chomped me on the forehead – I could feel its teeth sort of crunching through the skin.”

Less traumatic but perhaps just as troubling for Ward was the 72 hours he would spend waiting for surgery after the attack. Most of this was in a Box Hill Hospital triage tent, one of many “holding areas” set up outside Melbourne hospitals to alleviate emergency room overcrowding. The surgery was ultimately done 52 kilometres away, at Peninsula Private Hospital in Langwarrin, because Box Hill was too busy.

Box Hill Hospital isn’t alone in making patients like Ward, with serious but non-life threatening injuries, wait many hours or even – in an increasing number of cases – days, before proper medical care can be administered.

It is one of 14 hospitals across Melbourne to have either put up tents or to be planning similar temporary facilities, to take patients from ambulances and prevent the practice of ramping, where crews are forced to wait for a bed before they can leave their patient. 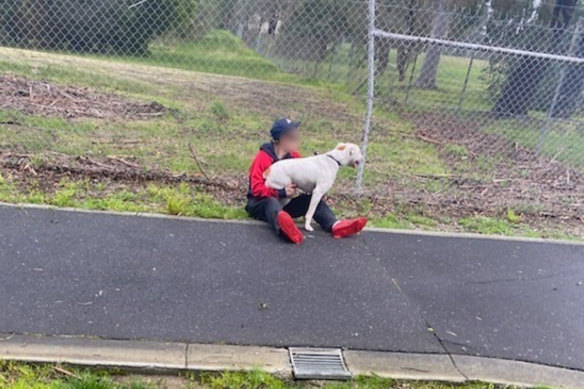 The dog that attacked Guy Ward, in a photo taken immediately after its owner brought the dog under control.Credit:Guy Ward

New analysis of state government data by the Victorian Healthcare Association shows the number of people seeking help at emergency departments jumped 36 per cent since the pandemic began.

The data, sourced from the Victorian Agency for Health Information, shows there were 357,000 presentations to emergency departments in the three months to June 2020. For the same period to June 2022, there were 487,000. The 2020 figure is in part lower because fewer attended emergency departments due to social-distancing restrictions and fear of COVID-19, but the increase is still notable.

The data shows the number of sick people needing immediate care climbed by 9 per cent. This includes people in cardiac arrest requiring resuscitation and others with chest pain or a suspected stroke. And more people are waiting longer for care in emergency departments, with only half of all serious “category two” emergency patients treated within clinically recommended times in the three months to June 2022. During the same three months in 2020, 71 per cent of these patients were treated on time.

During this year’s winter peak, about 2000 healthcare workers were also furloughed on any given day – the equivalent of a large regional hospital’s workforce. It meant fewer staff were available to care for more patients.

The VHA’s deputy chief executive, Juan Paolo Legaspi, said hospitals could only do so much to keep up with rising demand. The association wants more funding for services to keep people out of hospital, including community health services caring for the vulnerable at higher risk of hospitalisation. It also wants “in-reach” services to aged care homes expanded because around 40 per cent of hospital admissions for preventable conditions are people aged over 70.

Australasian College for Emergency Medicine’s Victorian chair, Dr Belinda Hibble, said the bed blockage in the state’s hospitals was the result of both the pandemic and pre-existing factors. “There’s a high volume of patients stuck in hospital waiting for the next thing they need,” she said. These range from waiting for care through the NDIS, aged care placements, access to rehabilitation or supports such as care in the home.

Patient needs have become more complex both because the population is ageing and because, through the pandemic, many did not access preventative care.

“We’re seeing the results of that now,” Hibble said. ”There’s a huge volume of patients who haven’t had their cancer picked up early with different screening programs. Or patients who didn’t get to their GP during the pandemic to get their high blood pressure checked and who were now arriving at emergency with a stroke.” 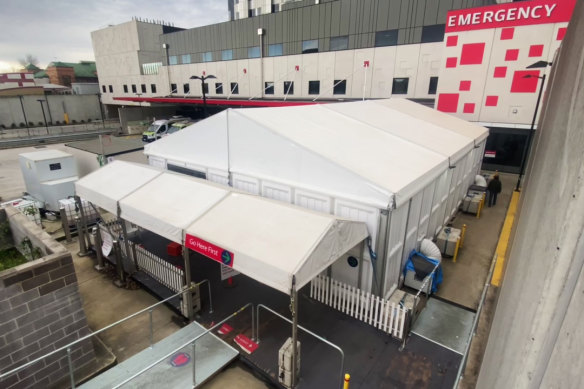 The tent outside Box Hill Hospital where some patients are being forced to wait.Credit:Nine News

Hibble said hospitals needed to be able to provide all levels of care seven days a week, but many services were not structured to provide the same level of care on a weekend that was provided on weekdays. “It means we can’t efficiently discharge patients safely across all days, but emergency demand continues every day.”

Australian Nursing and Midwifery Federation Victorian branch secretary Lisa Fitzpatrick said additional nurses were needed in emergency waiting rooms and a ratio of nurses to patients in ER needed to be mandated. “Legislated ratios will ensure hospitals are funded for a consistent approach to increased staffing in waiting rooms,” she said.

A Victorian government spokeswoman said it was working with health services to recruit and train up to 7000 healthcare workers, including 5000 nurses, as well as recruiting from overseas. She also said work the federal government was doing to get NDIS participants out of hospital quicker would help, along with Victoria’s own NDIS initiatives.

Guy Ward is philosophical about his long wait for surgery, – “Dog bites are nasty but not urgent” – and said staff at Box Hill were “amazing, friendly and doing a great job under difficult circumstances”.

Eastern Health runs Box Hill Hospital, and its director of clinical operations, Shannon Wight, said that while the health system was under extreme pressure, “we constantly strive to deliver the best care [and] our people are working tirelessly to provide exceptional care for all of our patients”.

He will get his stitches out next Thursday, and hopes to return to swimming in a few weeks.