I grew up with a Puerto Rican grandmother, and I consider myself very lucky to have never misbehaved severely enough to compel her to scar me for life with the tale of El Cuco. But that doesn’t mean I haven’t heard the stories. El Cuco is the Puerto Rican (many countries have their own versions of El Cuco) bogeyman — a monster-like creature that either eats children whole or kidnaps them, depending on what your elders think will most scare you into behaving. But what if El Cuco were real? That’s the terrifying prospect Ann Dávila Cardinal explores in her new YA book, Five Midnights. Bustle has the cover reveal and an exclusive excerpt below!

Five Midnights, due to hit shelves on June 4, 2019, follows Lupe Dávila and Javier Utierre, who come together to help solve a series of grisly murders sweeping through Puerto Rico. But the clues lead them out of the real world and into the realm of myths and legends. And if they want to catch the killer, they’ll have to step into the shadows to see what’s lurking there — murderer or monster? It is every Puerto Rican child’s worst nightmare come true, including Dávila Cardinal’s.

"From the first time my mother told me of the legend of El Cuco, I was hooked. ‘Best behave or El Cuco is going to get you!’ is exactly the kind of thing we kids of Puerto Rican mothers hold on to and bring up in therapy years later," Ann Dávila Cardinal says. "And it’s true, El Cuco still haunts me, but as I looked deeper into the myth I found no clear description of what this monster looks like. His appearance changes based on the fears of his victims. Needless to say, this was manna to my horror-loving heart."

Check out the spectacularly creepy cover below, illustrated by Naomi Romero, and keep reading for an excerpt from the book. You’ve got until June 4, 2019 to prepare yourself for El Cuco’s spine-chilling reveal: 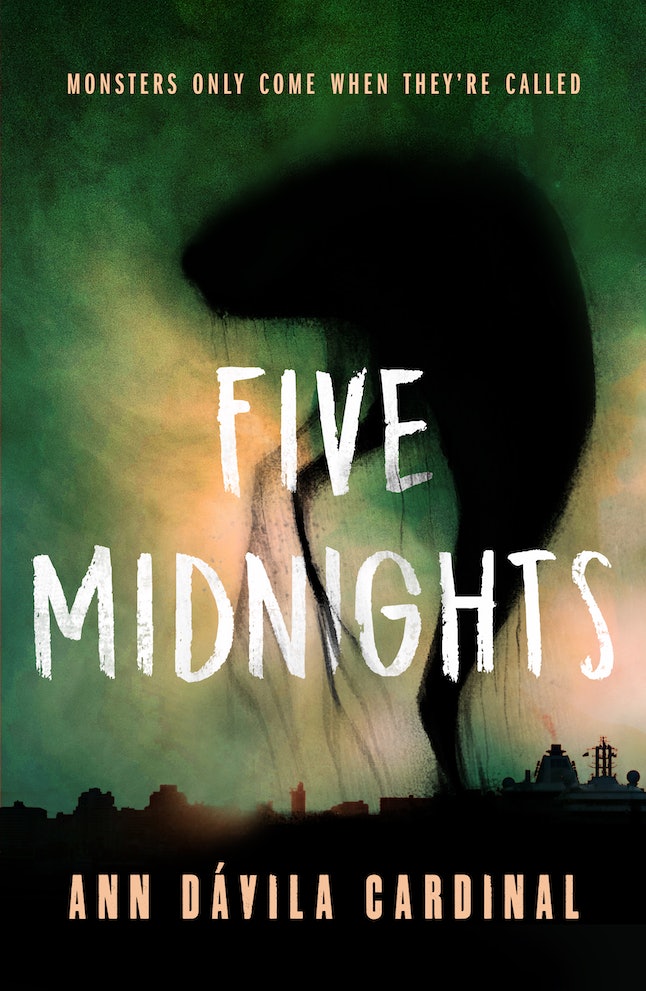 “But tío, I can take a cab. I’ll go straight to your place, promise.” First her father had waited until they were at the airport to tell her he wasn’t going with her on their annual trip to Puerto Rico to see his family, and now that she’d landed, her uncle was suggesting further humiliation.

“Absolutamente no. I’m sending a squad car. It’s not safe for a young woman to travel around the city by herself.”

Lupe harrumphed. He’d made up his mind, so there was no arguing with him. The man hadn’t become police chief by being a pushover. “Fine.” She hit End and waited for the other passengers to move so she could exit the plane. At least without her father along she didn’t need to hide a dozen tiny empty Bacardi bottles that he’d scatter around their seats like insect husks.

The clunk of her Doc Martens echoed in the airport’s linoleum-lined artery, suitcase rolling obediently behind. She’d never come to Puerto Rico without her father, never walked to baggage claim without struggling to keep up with his long impatient stride. She smiled. This was her first trip as an adult. Okay, so sixteen wasn’t adult, but she was off leash. She swallowed down a momentary feeling of panic as strangers rushed by her on either side. It wasn’t like she was in a totally new place. She took a deep breath and felt the press of familiar ground against her feet. It was a teeter-totter feeling of familiarity and not belonging. But she was used to that. Lupe held her head a little straighter, walked a little taller.

She could handle this.

When she pushed open the glass doors to the loading area, the hot, humid air hit her. Year after year, she was shocked when she walked into the heat from the air-conditioned airport. Particularly compared to the still cool, early July morning breezes back in Vermont, the sultry temperatures held trouble in the moist air. 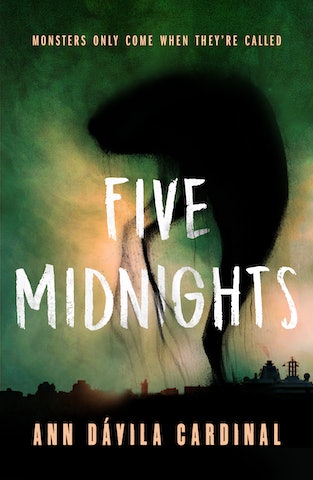 Waiting in the cabs-only section of the pick-up zone was a police officer in full midnight blue, handgun on his hip, dark sunglasses hiding his eyes, holding a sign that read señorita lupe dávila.

Lupe ducked her head. She considered walking by the policeman and calling an Uber on her father’s dime. Her father had given her the keys to her uncle’s house; she could just let herself in. Yeah, it’d be rude and her uncle would be pissed but, as her father liked to say, it’s easier to ask for forgiveness than permission. Instead she pulled on her own sunglasses, walked up to him, and whispered, “I’m Lupe Dávila.”

“Bienvenidos, Señorita Dávila. I’m Officer Ramirez,” he said in a way too loud voice. She followed him to the double-parked cruiser and felt the heat of stares from the other travelers.

So much for being off leash.

After popping the squad car’s trunk, Ramirez tried to wrestle her suitcase from her.

She swung it into the carpeted trunk. “I’m pretty used to taking care of myself.” He looked almost dejected that she hadn’t let him help her. “So, my uncle dragged you away from some important police work to chauffeur me around, huh?”

He slammed the trunk, the midday sun glinting off the shiny black paint. “Your tío asked me to bring you to his house. He can’t get away and your aunt is in Humacao today. And I hear your father couldn’t get away from work either.”

Lupe snorted. “Yeah, that’s what he told me, too.” He stood holding open the door to the backseat, but Lupe edged around him, opened the front passenger door, and slid in. No way she was riding in the back like some kind of perp. Though it was probably against the rules, this experience was already humiliating enough. In the side-view mirror she watched him pause for a moment, then close the door and walk around the car with a defeated look. She smiled. Lupe often reduced adults to this look of defeat. But humiliation or not, she was glad she wasn’t driving. She couldn’t wait to use her newly minted driver’s license at home, but driving on the island was another story: it was beyond aggressive. Her father liked to joke that this was where they trained New York City cab drivers.

As they made their way along Highway 26 she was struck as she always was by the billboards. They were illegal in Vermont, so she was unaccustomed to the barrage of colors and pithy messages. Thirty-foot-high women in tight dresses begged her to drink Medalla beer with open crimson lips, handsome unshaved men held minuscule cell phones to their story-high ears.

She perked up at this. “You mean the drug dealer who was eviscerated on the fifth?”

Ramirez looked at her with one substantial eyebrow raised. “I mean, I saw it on El Nuevo Dia online.”

He nodded. “Yes, a terrible thing.” He made a quick sign of the cross, kissing his thumb at the end.

Lupe had always wanted to see her uncle on the job. And to visit her uncle on the job. Her father had shipped her off to the island, so why shouldn’t she finally do what she wanted to do? She usually dreaded coming down and being dragged from relative’s house to relative’s house, heat and clouds of mosquitoes surrounding her like a gang. Maybe this trip she’d have a chance to see the real Puerto Rico. As she watched the bright green palm trees file by, she formulated a plan.

“Oh, no!” She put her hand to her mouth in faux surprise. “What’s the matter, Señorita Dávila?”

“Lupe. Call me Lupe, please. It’s just . . . the keys to Tío Esteban’s house, my father was supposed to give them to me this morning, but I guess he forgot.” She put on a concerned face as she lay her palm over the outside pocket of her backpack as if he could see the keys hidden in its depths.

Ramirez grimaced. “Ay, we’ll have to call your uncle then. I’m not sure what he would have me do.” He pulled over to the highway’s shoulder and put on the flashing lights.

She had to admit. She loved the lights.

He pushed a speed-dial button and Lupe could hear her uncle’s booming voice on the other end, barking in rapid Spanish. Ramirez listened, nodding as if the chief could see him. “Bueno. Sí, jefe.”

Lupe watched him tuck the phone away in his shirt pocket. “Well? What’d he say?”

Ramirez pulled back into traffic and flipped off the lights. “He wants me to bring you to the crime scene. Your aunt is two hours away.”

It worked! Lupe had to restrain herself from pumping her fist in victory. She’d seen thousands of crime scenes on television, had talked to her uncle about them since she was twelve, and now she was going to a real one? Not your typical tourist attraction and that was perfect. If her father didn’t like it, too bad. If he’d been with her this never would’ve happened.

Lupe loved the way adults addressed her on the island; m’ija, as if she were this hardened police officer’s daughter as well. Considering her challenged luck in the parental lottery she’d take any decent parental-type figures she could get.

“—are you excited to be back in Puerto Rico?”

She shrugged. “I guess.” She thought about the crime scene they were about to visit. “I mean, Vermont’s pretty boring.”

They chatted about the difference in weather, driving conditions, usual small talk, then Lupe decided to see if she could get some information about the case, especially since now she was going to the scene of the murder.

“So this murder, it’s interesting, huh?”

The smile bled off of Ramirez’s face. “Interesting, yes.” Lupe glanced at him out of the corner of her eye as he drove, his fingers tightening around the steering wheel. But he didn’t say anything more. She was going to have to work a bit harder.

“Do you have any leads as to who the murderer is?” “No,” he said, and made the sign of the cross again.

Lupe watched him through narrowing eyes. All the signs of the cross, avoiding the conversation, even the news article was spotty… something was up with this murder, and she was going to find out what.

Seemed like the summer wasn’t going to be a total loss after all.