Yesterday was a day for championing British fashion design, according to the Princess of Wales. Looking radiant on Wednesday evening as she stepped out in not one, or two, but three different pieces that showcased some of Britain’s finest designer labels.

Alongside her husband Prince William, the 40-year-old attended the launch of this year’s Earthshot Prize at Boston’s City Hall. And in the spirit of sustainability, Princess Kate chose to pay tribute via an all-green ensemble, delivering a masterclass in tonal dressing.

The Princess of Wales opted for an elegant midi dress by Burberry which felt resolutely unique on account of its interesting fan-style asymmetric waist pleating. The long-sleeved piece, finishing just below the knee, featured a classic plaid pattern in a deep forest green, as well as other supporting tones, red, white, and black. 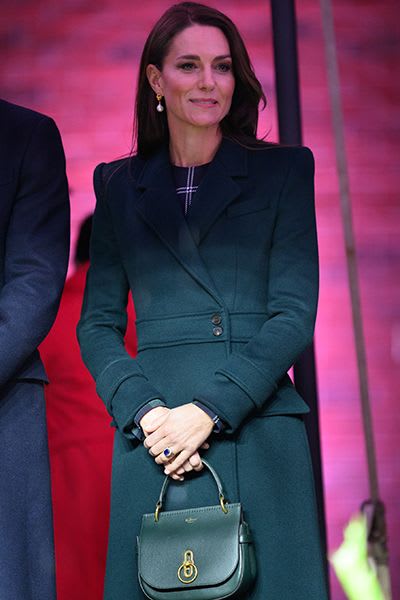 For outerwear, Princess Kate turned to one of her most adored British brands – one that she often seeks for sharply tailored pieces that ooze sophistication. Her coat was by Alexander McQueen, featuring strong shoulder lines via subtle padding, as well as a wrap over, double-button fastening.

Princess Kate extended her verdant colour palette into her accessory choices, sporting an unfussy pair of court shoes by Emmy London as well as a deep emerald handbag by Mulberry.

Suffice to say it is an expensive time of year, and so if you’ve fallen hard for Princess Kate’s luxe accessory, we’ve got some good news to impart. Mulberry’s Amberley bag which originally retails for £850, is available to loan on multiple designer rental apps in some equally covetable colourways.

Hurr boasts versions of the style in both a creamy duck egg blue, and an off-white with a contemporary oversized chunky chain, whereas over at By Rotation, you can rent the Amberley in a playful embroidered floral design or a more glitzy embellished iteration – utterly perfect for the upcoming party season.