J. K. Rowling has called for an end to the "climate of fear" around the transgender debate, and told of the "heartbreaking" letters she received from young people who regretted their gender-reassignment surgery.

In her first interview since she sparked controversy by speaking out on transgender issues, the Harry Potter author called for "a more nuanced conversation". This year, she faced a backlash from fans and stars of her film franchises when she mocked an article that referred to "people who menstruate" rather than "women". 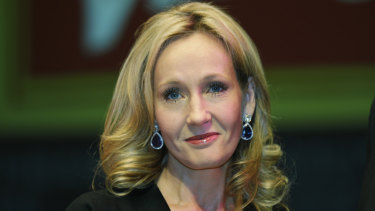 J. K. Rowling has called for an end to the “climate of fear” around transgender debate.Credit:AP

Speaking to Good Housekeeping magazine to promote her latest children's book, The Ickabog, Rowling said she had received a great deal of support including from trans people.

"I've had a huge post bag since speaking up on this issue and more than 90 per cent of the letters and emails have been supportive," she said. "My correspondents have included medical staff, social workers, prison workers, workers in women's refuges and members of the LGBT community, including trans people. Many are afraid to speak up because they fear for their jobs and even for their personal safety.

"This climate of fear serves nobody well, least of all trans people.

"I believe everybody should be free to live a life that is authentic to them, and that they should be safe to do so. I also believe that we need a more nuanced conversation around women's rights and around the huge increase in numbers of girls and young women who are seeking to transition.

"Some of the most heartbreaking letters I've received have been from young women who regret the irreversible surgeries they've undertaken. These stories need to be told." Her comments follow a high court ruling in the UK last week that children under the age of 16 are unlikely to be able to give informed consent to undergo treatment with puberty-blocking drugs.

In her original comments, Rowling sparked anger when she said: "I know and love trans people, but erasing the concept of sex removes the ability of many to meaningfully discuss their lives. It isn't hate to speak the truth.

"I respect every trans person's right to live any way that feels authentic and comfortable to them. I'd march with you if you were discriminated against on the basis of being trans.

"At the same time, my life has been shaped by being female. I do not believe it's hateful to say so." It prompted Emma Watson, star of the Harry Potter films, to post a social media message of support for trans people.

Daniel Radcliffe, Eddie Redmayne and Bonnie Wright, fellow stars of the films and their spin-offs, also distanced themselves from her comments.

The backlash extended to a school in Sussex, which announced it had dropped plans to name a house after Rowling in light of her comments. The administrator of the world's biggest Harry Potter fan site, The Leaky Cauldron, suggested people stop buying the Potter books or watching the films.

It comes as the Natural History Museum launched an exhibition inspired by the creatures from Rowling's Fantastic Beasts films.