“Now a major motion picture,” says the cover of the new edition of Where the Crawdads Sing, the Delia Owens novel that has sold 12 million copies since its publication in 2018.

Has anyone ever admitted to turning a book into a minor motion picture? Or just a motion picture full stop, leaving it to the public to supply the appropriate adjective? Anyway, what is “major” supposed to mean in these cases? Is it just another word for costly? Or is it meant to assure us that the picture in question is a substantial artistic event? 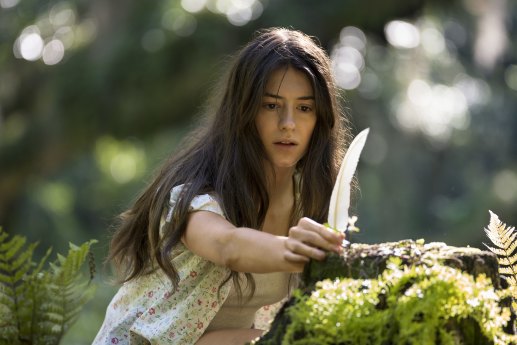 “The more delicate end of the spectrum”: Daisy Edgar-Jones in Where the Crawdads Sing.Credit:Michele K Short

Alas, the word is now out that Crawdads isn’t that kind of major movie. It has performed bafflingly well at the box office, but no critic I know of has called it great. The only question dividing the critics is whether it’s a full-fledged turkey or just mediocre. Personally, I don’t think it has enough gusto to qualify as a turkey. To be a turkey, a movie must aim for greatness and fall miserably short. Crawdads aims for flavourless adequacy, and achieves it. It’s watchable. It’s diverting. But a great Hollywood movie it ain’t.

Most novelists would kill to get their book made into a Hollywood movie of any kind. In Delia Owens’ case, we need to be careful when using metaphors about homicide. The movie’s release has prompted renewed scrutiny of a real-life murder that happened years ago in Africa. The crime remains unsolved, and Owens herself is still wanted for questioning about it.

In 1996, Owens and her then-husband Mark were working as wildlife rangers in Zambia, and running an aggressive campaign against local elephant-poachers, when a suspected poacher was shot dead on their patch. In 2010, The New Yorker found a witness who claimed to have seen Delia’s stepson Christopher fire several of the fatal shots. All three Owenses are wanted for questioning in Zambia. But since America has no extradition treaty with that country, the case seems destined to fester on, casting a malodorous cloud over the whole Crawdads phenomenon.

Published when its author was almost 70, Crawdads was Owens’ first novel. Its heroine is Kya Clark, who lives in a shack in the swampy wilds of North Carolina. The action begins in 1952, when Kya is six, the youngest of five children who live in fear of their abusive father. Their mother, who suffers the brunt of his violence, walks out on the family on the book’s second page.

Shortly thereafter Kya is serially abandoned by her siblings, and finally by her good-for-nothing Pa. From the age of 10, she raises herself. She tries school for precisely one day, but bails out after the other kids mock her. When she’s 14, she is befriended by a local lad named Tate Walker, who is four years her senior. Discovering that she can’t read, Tate teaches her how. They fall in love. After a year or so, the prospect of exploring each other’s bodies arises. Kya is keen, but Tate demurs, citing the fact that Kya is underage.

In due course, Tate abandons Kya too. She then falls in love with Chase Andrews, “star quarterback and town hotshot”, who proves to be a significantly less gallant fellow than Tate. When Chase is found dead at the bottom of a fire tower, Kya is charged with his murder.

Crawdads was an uneven book, composed of three awkwardly fused elements. At one level it was a very perfunctory murder mystery. At another it was a love story, featuring prose that verged on bad Mills and Boon (“‘It was you, Tate,’ she said, and then thought, It was always you.”).

If the novel had consisted of those two elements only, I doubt it would have sold 12 million copies. But when Owens addressed herself to the natural world rather than the social one, her prose got markedly better. The parts of her book that worked, and lingered in the mind, all had to do with the theme of wildness. 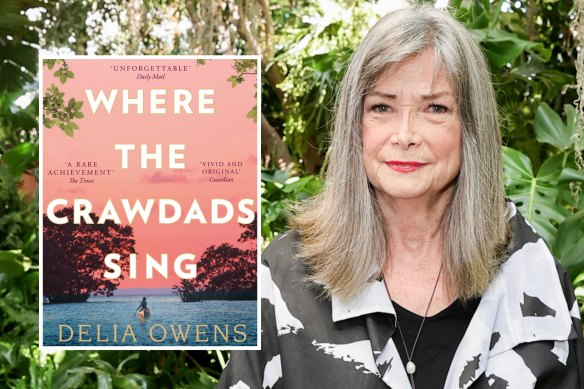 Delia Owens’ novel has sold over 12 million copies since it was published in 2018.Credit:Getty; supplied

As a piece of eco-escapism, Crawdads was undeniably effective. It’s surely no accident that its sales went next-level during the lockdown years, when the idea of living far from human society acquired a special charm. Geographically, the book was set in an unusually untamed part of America. Temporally, it was set in a vanished age, before developers started making that part of America look like all the other parts.

But the book’s real secret lay in the way it harnessed a myth that’s had a long hold on the Western imagination: the myth of the feral child.

One reason this myth is so potent is that it’s not entirely a myth. There have been real feral children in history. The most famous of them was Victor, the Wild Boy of Aveyron, who reared himself in a French forest in the 1790s. Efforts were made to clothe and feed and study Victor, but unless physically restrained he had a tendency to strip and head for the woods. “He walks on four legs, eats plants, is hairy, deaf and mute,” said an insensitive contemporary. Actually, Victor wasn’t deaf, but he never learnt how to speak.

Other real-life feral children followed in Victor’s wake. And the myth has fuelled some classics of Western literature. Think of Huckleberry Finn. Think of The Jungle Book, in which Mowgli is raised by wolves, with help from a bear and a panther.

Shoehorning similar material into the framework of a quasi-realistic modern novel, Owens creates some glaring improbabilities. For a supposed wild child, Kya is remarkably accomplished and literate. Unlike Victor of Aveyron, she doesn’t grunt and get around on all fours. On the contrary: she’s presentable enough to make both Chase and Tate beat a path to the door of her surprisingly schmick shack.

Crawdads was a patchy book. But Hollywood once had a knack for turning patchy books into superior movies. In the early 1970s, when Mario Puzo’s The Godfather was being developed as a film, the producer Robert Evans was adamant that the director had to be an Italian. He wanted someone who would make audiences “smell the spaghetti.” He pursued Francis Ford Coppola, but Coppola was reluctant. He thought Puzo’s novel was a piece of schlock.

But Evans persisted. Finally, Coppola re-read the book and found a way forward. Scrapping the pulpier parts, he foregrounded the stuff about family relationships and power. He turned a racy popular novel into an allegory about corporate America.

A filmmaker with a comparably intense feel for nature might have worked similar wonders with Crawdads. The right director would have made you smell the swamp and the palmettos and the grits, whatever grits smell like. 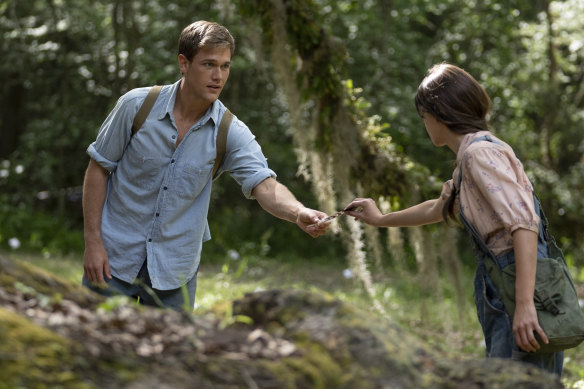 But that’s exactly what the movie fails to do. Its director, Olivia Newman, has made only one feature before, the low-key First Match (2018). Here she’s working from a script, by Lucy Alibar, that’s faithful to all the wrong parts of Owens’ novel. Heroing the banal murder plot, the film races through or completely omits some of the novel’s most resonant moments.

In the book, the early abandonment scenes happen quickly, but they’re written well enough to make you feel their weight. In the movie they just happen quickly. In the book, Owens lays down a drumbeat of animal imagery to drive home the message that Kya is a child of nature. The movie fails to exploit the language of film in any analogous way. The novel doesn’t shy away from the realities of racial segregation in the South. The movie does.

Crawdads is being advertised as if it’s the big epic that will lure us back into cinemas. And many people have duly gone to see it, even though it’s neither epic nor all that cinematic. Apparently we’re so desperate to return to theatres that we’ll go there to see anything, even something that feels more like a fair-to-middling TV show than a bona fide movie.

Crawdads doesn’t even have any big stars in it. In its golden age, Hollywood would have thickened the texture of Owens’ sketchy melodrama by loading the cast with established stars. Star power is a universal solvent. A charismatic star can turn even the most rudimentary character into a living, breathing person.

And Owens’ text featured many a character who sorely needed the kiss of life. Her male characters especially were thinly written and hard to tell apart. Their cardboardy names said it all: Tate Walker and Chase Andrews. Or was it Chase Walker and Tate Andrews?

Watching the movie, I felt no clearer on that point than I felt when reading the book. Harris Dickinson and Taylor John Smith, who play Chase and Tate respectively, are capable actors. But who are they? Which one is which? Conceivably, they’ll be movie stars one day. But it would be pushing it to call them stars now.

The same goes for the English actress Daisy Edgar-Jones, who is drastically miscast as Kya. I didn’t buy her as a feral child for a second. “Every creature does what it must to survive,” says the tagline on the poster, under a massive close-up of Edgar-Jones’ face.

Well, every human being is technically a creature, as the book rightly insists. But as creatures go, Edgar-Jones clearly hails from the more delicate end of the spectrum. It doesn’t help that her name is Daisy. A daisy is what she looks as fresh as, even when a tasteful smear of soil has been applied to one of her cheeks.

Crawdads is a minor motion picture. It didn’t have to be. When great books are made into movies, disappointment inevitably follows. When so-so books are made into movies, popular entertainment can sometimes be raised to the level of art. Crawdads wasn’t a great book, but it was good enough to serve as raw material for the kind of lush, sweeping romantic epic that Hollywood does so well – or used to do so well.