There’s often a moment in a Zoom where you just have to ask about that thing in the background.

With Rob Smith, creative director at London-based design studio Bompas & Parr, that thing is an enormous pipe organ designed to play music that changes the flavour of whisky. 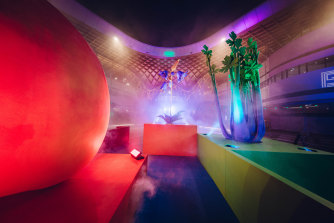 “Yeah, so this is our flavour organ,” says Smith, glancing over his shoulder. It sits in the corner of their meeting room, returned from a world tour where an organist would play music designed to alter the taste and experience of sipping distilled liquor.

And it’s a typical project from this studio, whose creations are practical – or entirely impractical – experiments in the weird sciences of the human senses. 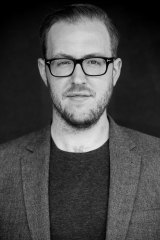 A new commission, just arrived at Bunjil Place in Melbourne as part of mini-festival Casey Cornucopia, is a collection of giant fruit sculptures that emit a heavy “flavoured fog”.

A lot of what we taste is actually what we smell, explains Smith. And smell is a primal, evocative sense. “Most of smell is memory,” he says. “Everyone has a different memory that’s they’ve created through the entire history of their lives – all of those associations they’ve made with the scents around them that bring you back to times and places.”

It’s particularly sharp at the moment, says Smith, at a stage of the pandemic when many lost their sense of smell for a time, or had little chance to sniff the world from lockdown.

“We’re almost hyper-aware of taste and smell now,” he says. “It’s come back in a different way: it’s such a fickle, fleeting sense.” For the new installation they have created a flavoured fog which will change over time, with the base notes an apple, a celery, and a chocolate lily which is a local Indigenous flower that tastes and smells like chocolate with a little more vegetal taste, says Smith.

“They’ve got references: the smell of chocolate or apple bring all of its relationships, and everyone can bring their personal journey to it … you get to taste it, smell it, see it, feel it. It hits all of those senses.”

Bompas & Parr started life as a jelly-making company but gradually morphed into an experimental design studio by way of more and more elaborate jelly moulds – an early success was a jelly St Paul’s Cathedral.

They now have an in-house “development kitchen” which sounds like a room from Willy Wonka’s factory: “[the designer] was making some fruit-based edible paints while we were in here having a meeting – we heard the blender whirring away”.

And they have a list of dream projects yet to become reality, he says, such as a recreation of Douglas Adams’ restaurant at the end of the universe.

“There’s always a list,” says Smith. “At our 10-year party we filled our courtyard with all of the things that clients had said ‘no’ to. All of the things where they said ‘you can’t do that, absolutely not’. We had a fruit bowl hot tub, giant slides, fireworks. It’s never impossible, because nothing’s impossible.”

They’d currently doing some R&D into a “fireworks bar” where someone can don a fire retardant suit and step into the centre of a fireworks display.

“That was a wild day in the studio when we did our tests,” Smith says.

The Bompas & Parr “fruit weather” sculptures are at Bunjil Place until July 17.