"I'm a monument," says Wendy Whiteley, standing barefoot inside her Lavender Bay home, wearing one of her signature headscarves and a long linen dress. "They wheel me out when they need me."

"They" in this case, refers to Parramatta's Riverside Theatres, which is staging a play this month about her late husband Brett and his famously alluring wife, model, muse, fiercely intelligent critic, mentor and now widow. 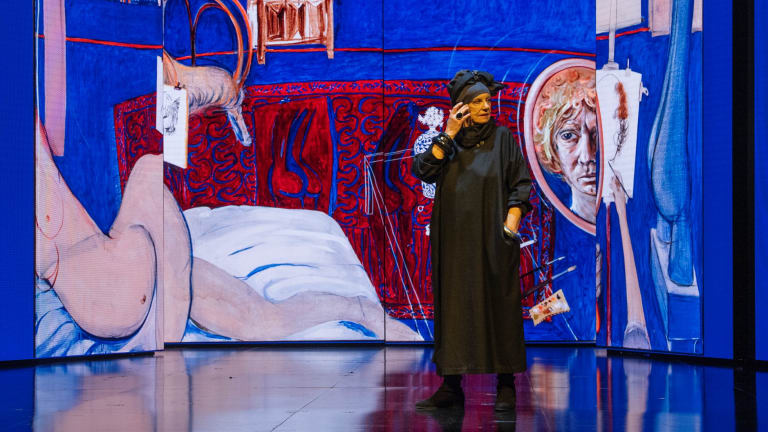 Wendy Whiteley standing in front of massive screens of Brett Whiteley’s work at the launch of the Opera Australia season, which will include the opera Whiteley.Credit:Louise Kennerley

It's been 26 years since Brett died of a heroin overdose, and 17 years since Wendy lost their daughter Arkie to cancer. She's in a reminiscent mood, and memories come tumbling out as she holds court over coffee and pecan cake with the play's director Kim Carpenter.

Thanks to Brett's paintings, the room they are talking in, immortalised in his 1970s Lavender Bay series, is surely one of the most beautiful – and recognisable – in Sydney. His sensual, lyrical paintings of the interiors, carefully curated by Wendy, and the ultramarine harbour beyond, which he described as "optical ecstasy", have imprinted themselves in our minds as the quintessential paintings of the harbour city. 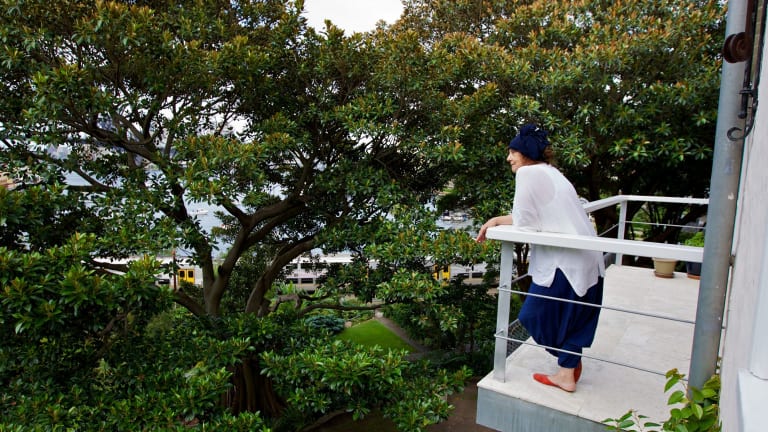 The couple moved into what was then a small, gloomy flat upstairs after returning home from a long "visual education" through Europe, London and New York. "We were gypsies," Wendy says. "We had no possessions. We just saw the bay and absolutely felt in love with it."

They enrolled Arkie in kindergarten up the road and Brett, inspired by his immediate surroundings, set to work in a blaze of creativity, drawing, painting, listening to everything from Bob Dylan to Bach's cello concertos.

"It was a very tight space. Arkie would sleep over there," Wendy says, pointing to one corner. "Our bed was over there on the other side, the dogs would be running about and Brett would be working in the middle of it all. When he was working Brett was terrific. Irritating too," she laughs. "If I'd just bought a kilim rug and he spilled ink on it, he'd tell you his work was more important and to stop making a fuss. The argument would end with both the work and the rug going into the bath."

Carpenter is listening intently, keen to represent Australia's art superstars as accurately as possible, from the dreamy days of Lavender Bay to the sickening lows of heroin addiction. As keeper of the Whiteley legend, and owner of the copyright of all Brett's artwork, consulting Wendy is important. 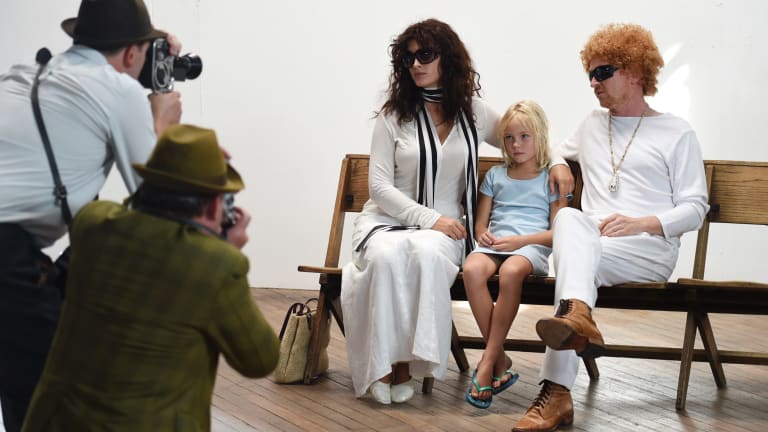 For the seasoned director, it's both a labour of love and a huge responsibility. Artwork in the play ranges from Brett's childhood drawings, to The American Dream, the Lavender Bay Series, and landscapes of Central West NSW where he would go on "geographicals" to visit his sister Frannie Hopkirk.

"Brett achieved rock star status as an artist," Carpenter says. "I can't think of anyone else in Australia who filled that role, but sadly, he also had a rock star death. His myth lives on in our culture, as it does with James Dean or Elvis Presley. Whether Brett's alive or not, he fills a hero image all countries need in terms of artistic merit. His work is timeless." 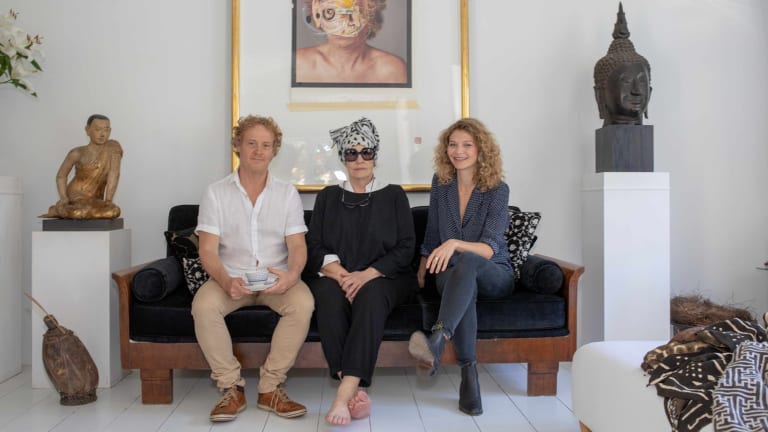 Wendy Whiteley (middle) with Paul Gleeson and Leeanna Walsman, who play Brett and Wendy in the Riverside Theatres’ play.Credit:Neil Hunt

It's also synonymous with Sydney. Whenever Carpenter has overseas guests, the first place he takes them is The Art Gallery of NSW where he stands them in front of Balcony 2 (from Whiteley's Lavender Bay series). The pilgrimage continues onto The Brett Whiteley Studio in Surry Hills (where he worked) and then out onto the harbour.

Brett and Wendy were art royalty whose life continues to seize the imagination of storytellers. In 1989, Don Featherstone's Difficult Pleasure documented Brett's life after divorcing Wendy. When former Good Weekend writer Janet Hawley submitted a proposal for her illustrated book Wendy Whiteley and The Secret Garden, it prompted a bidding war, and has been reprinted several times since it was published in 2015. Ashleigh Wilson's compelling biography, Brett Whiteley, Art Life and the Other Thing in 2016 was followed a year later by James Bogle's documentary Whiteley. 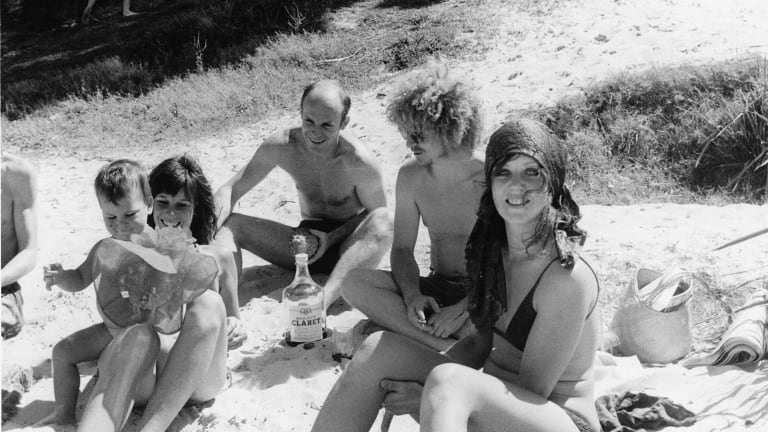 Brett and Wendy at Chinaman’s Beach, early 1971, in a still from the documentary Whiteley.

He fills a hero image all countries need in terms of artistic merit.

This year Whiteley aficionados can lose themselves in Riverside Theatres' Brett & Wendy, A Love Story Bound by Art, and The Art Gallery of NSW's exhibition of more than 116 Whiteley drawings. In July comes composer Elena Kats-Chernin and playwright and librettist Justin Fleming's interpretation of the couple's tumultuous life for Opera Australia, Whiteley. The production will give Brett's artwork stellar treatment by projecting it on the company's giant new digital screens on stage.

The material is a rich brew. Brett and Wendy were classic bohemians, living in New York in the Chelsea Hotel, mixing with the likes of Janis Joplin and Jimmy Hendrix. Returning home, Brett's monumental The American Dream, documenting the race riots and the Vietnam war of the '60s, fetched a record price in Australia. Then came the monster of heroin addiction which would eventually kill him. Wendy, determined to be free of its grip, left Brett in the process in order to survive, only to suffer the devastation of losing their daughter Arkie to cancer. Arkie was 37. Almost speechless with grief, she hurled herself into creating her now-beloved garden out of disused railway yards on her front doorstep. She transformed herself, in Hawley's words, "from art goddess to labourer in the mud". In the process, she turned a place of sorrow into one of enchantment and solace for countless visitors. 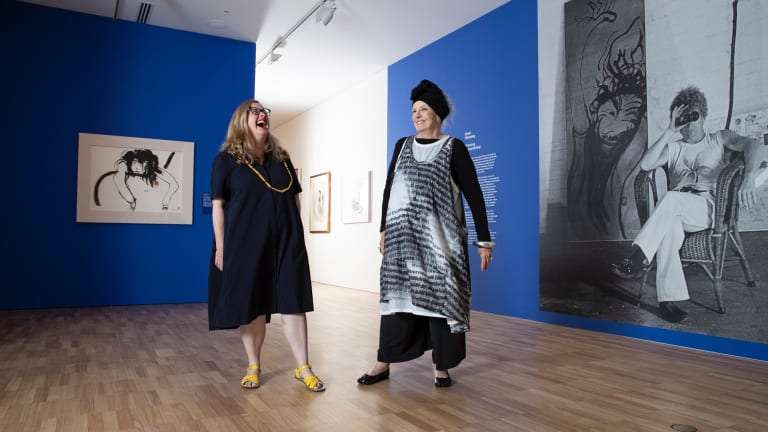 Curator Anne Ryan and Wendy Whiteley at the Art Gallery of NSW ahead of the Brett Whiteley exhibition.Credit:Louie Douvis

The pivotal role Wendy played in Brett's life has become more and more respected over time, says Carpenter. "Brett's work is so strong and so indelible and someone like that can't do it on their own. Wendy was so significant to his success. It was Wendy who made the space and made the world in which he could operate. She was simpatico with his vision. She gave up hers for his. All those still lifes you see in Brett's paintings, Wendy composed them all. She set them up. She's an artist in her own right."

Although initially taken aback by the idea, Wendy has also begun sitting in on the Opera Australia rehearsals. The idea first struck artistic director Lyndon Terracini when he was out on Sydney harbour with writer Justin Fleming. Terracini turned to Fleming and said "What does this remind you of?" to which Justin replied: "Brett Whiteley blue." 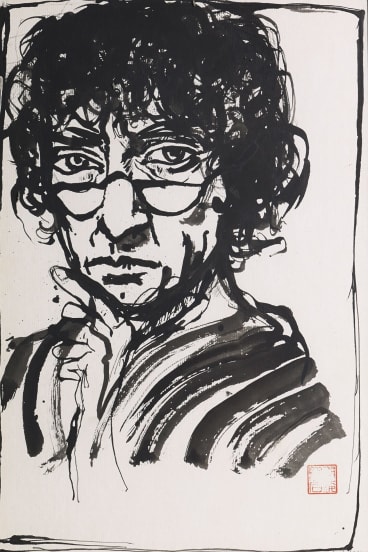 Brett Whiteley’s Self portrait with Reading Specs (1991) will be on display at the Art Gallery of NSW.Credit:Jenni Carter

Director David Freeman says a city like Sydney needs storytellers to tell it's stories, painters to paint it, and filmmakers to capture its magic and Brett has created a "fantastic" share of it. "It's an enormously seductive story," he says. "There's a mythic quality about it – both his self-destructive streak, much like Van Gogh, and the extreme thrill of creation he felt. It's also about a great mythological couple – they were truly a pair of star-crossed lovers."

Artist Garry Shead, who lived in Lavender Bay at the same time as Brett and Wendy, says it is impossible to think of one without the other. "Without Wendy there was no alchemy or magic. His talents diminished, dwindled without her." 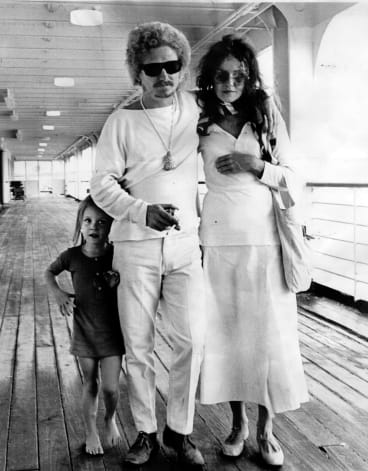 "Our relationship was pivotal to his creativity," says Wendy. "It's how artists survive the slings and arrows of life. And besides, we were together for such a long time. I met him when I was 15, we were just so strongly intertwined all those years."

Although one part of her sees the attention as "kind of odd", she is also dedicated to preserving his memory. "Brett does fascinate people. He was my husband and he fascinated me, as well as driving me mad. The fact is he's made some amazing work, entertained quite a few people and upset quite a few along the way. He was a charismatic character without a doubt."

The enduring fascination with his life, including among a new generation of art students, is simply because his work was brilliant, she says. "Brett took off like a rocket, when he was very young. He was a bloody hard worker and he set very, very high standards. They look effortless, but you need an incredibly sharp visual intelligence to make those sorts of paintings."

Every year she faithfully curates at least one new show of his work at The Brett Whiteley Studio.

"I drag things out that I've never shown before and think, 'He is amazing'. I'm good at hanging, but you've got to have the good stuff to hang. If he hadn't produced the kind of work he did, nobody would care less. He would have been just someone who had died of a drug overdose in a Thirroul motel."

Such was Brett Whiteley's fame that most people remember where they were when they heard the news of his death on the NSW south coast in 1992 at the age of 53. The memory is seared in Garry Shead's mind. "It was like an electric shock. I suddenly had to drive back to a place we'd stopped at on the way back from Thirroul where he'd gathered flowers for Wendy. He'd stopped on the side of the road to gather armfuls of them for her. It was just tragic."

Three years after her book was published, Hawley continues to be asked to talk with Wendy at art galleries, writers' festivals and throughout NSW. "The Whiteley magic is so powerful," she says. "They were both just so charismatic. He was the rock star and she was his gorgeous wife. They were like Mick Jagger and Jerry Hall – just so sexy and glamorous as all hell, and the story continues because of the way she survived and created her garden for the people.

"Wendy could have gone down a hole after Arkie died and gone back on drugs. But she turned her life into something positive through a garden. The Whiteley magic just rolls on."

Today, at 77, Wendy is happy in her own company and also when friends and family come to visit her Lavender Bay home. "I do miss him," she says. "I miss his humour. I miss his intelligence. The grief ebbs and flows, but there's a sense of acceptance too. It was part of the fabric of who we were."

One thing she steadfastly refuses to do is feel sorry for herself. She stays busy in the garden, at the studio, and in quality control, making sure Brett's artwork is used in films, plays, books or opera in a way he would have wanted. She runs a trim ship.

"I wouldn't deal with something I didn't instinctively have a feeling for. It has to be good," she says.

"Part of me is still astounded that all this is going on," she says, as she looks down on the lush garden where Brett and Arkie's ashes are scattered.

And Brett? What would he think? "He'd be astounded too."

Brett & Wendy, A Love story Bound by Art will be staged at Riverside Theatres from January 18-27.

Brett Whiteley: Drawing is Everything is at the Art Gallery of NSW until March 31.

Whiteley will be staged at the Sydney Opera House from July 15-30.