Ten’s creepy critters and camp chat reality series I’m a Celebrity … Get Me Out of Here! is shooting in northern NSW instead of South Africa this year, due to COVID-19 restrictions. But the theory that being closer to home might pep up the mix of participants didn’t make it to the first commercial break of last night’s debut, as veteran reality show singers Jack Vidgen and Paulini Curuenavuli joined Block hopeful turned radio host Jess Eva on the starting line. B-list celebrity wouldn’t be a slight in this case, rather a compliment. 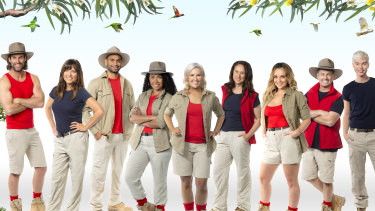 The lacklustre reveals were comically accentuated by the three guessing who the about to arrive “Golden Boy”, “Soapie Songbird”, and “Sassy Stand-up” might be. They nominated Ian Thorpe, Kylie Minogue and Celeste Barber, but instead met Grant Denyer, Toni Pearen and Mel Buttle. The nine debutantes introduced on the first episode lacked the surprise intrigue of previous years, such as Jacqui Lambie or Anthony Mundine, or the crackle of, well, genuine star power.

Then again, you don’t have to be that well known to have foodstuffs fired into your face. Denyer, Pearen and Buttle – who supplies deadpan self-deprecation – were blasted with gazpacho and squid ink in a challenge, while later former AFL player Travis Varcoe, comedian Ash Williams, and Bachelor villain Abbie Chatfield were doused in bugs and scrambled for keys in a snake pit; the show’s producers, who hired and fired Pete Evans, would know how they felt.

Returning hosts Julia Morris and Chris Brown supplied their trademark daffy banter, threatening to involve numerous deadly indigenous species. Yet easily the wildest thing on night one was Vidgen’s face, which he cheerfully admitted was Botoxed, achieving an otherworldly shape when a parachute drop created a wind-tunnel effect. A close second was the cleavage shots used to introduce Chatfield – they were so blatant even Pamela Anderson would probably suggest toning them down.

This season of I’m a Celebrity is going to need more sparks, although the reduction in public voting due to it being pre-recorded may impact who gets booted and why. Three contestants are still to be unveiled – they’ll have to make an impact.

Find out the next TV shows, streaming series and movies to add to your must-sees. Sign up to get it every Thursday.