On Friday, Donald Trump said: “We are totally prepared for a very long shutdown.” It was one of his rare uses of the pronoun “we” instead of his preferred – and in this case far more appropriate – “I”.

The shutdown is indubitably his. Congress offered him a way to continue funding the government without the money to build his nonsensical wall along the Mexican border, but Trump caved in to the rabid rightwing media and refused.

I was in Bill Clinton’s cabinet when Newt Gingrich pulled the plug on the federal government in 1996. It wasn’t a pretty picture. A long shutdown hurts millions of people who rely on government for services and paychecks.

Trump’s shutdown also adds to growing worries about the economy. The stock market is on track for the worst December since the Great Depression. World markets have lost nearly $7tn in 2018, making it the worst year since the 2008 financial crisis.

The shutdown is stoking fears that Trump could do something even more alarming. He might fail to authorize an increase in government borrowing before the federal debt reaches the current limit, which Congress extended to 2 March. A default by the US on its obligations would be more calamitous than a government shutdown.

All this brings us closer to the economic precipice. It worsens America’s most fundamental economic problem.

Economies depend first and foremost on spending. Otherwise, there’s no reason to produce goods and services. In the US, consumer spending constitutes about 70% of total demand. The rest comes from government and exports.

Export markets are in trouble. Europe’s and China’s economies were already slowing before Trump’s trade wars added to the stresses.

US government spending was hobbled even before the shutdown by a large debt, which Trump’s tax cut for big corporations and the wealthy has further enlarged.

Don’t count on American consumers to come to the rescue. Most Americans are still living in the shadow of the Great Recession that started in December 2007 and officially ended in June 2009.

More Americans have jobs, to be sure, but their pay has barely risen when adjusted for inflation. Many are worse off due to the escalating costs of housing, healthcare and education.

Trump has added to their financial burdens by undermining the Affordable Care Act, rolling back overtime pay, hobbling their ability to join together in unions, allowing states to cut Medicaid, and imposing tariffs that increase the prices of many goods.

America’s wealthy, meanwhile, have been taking home a growing portion of the nation’s total income. But the rich spend a small fraction of what they earn. The economy depends on the spending of middle-, working-class and poor families.

The only way these Americans have continued to spend is by going deeper into debt. By the third quarter of this year, household debt had reached a record $13.5tn. Almost 80% of Americans are now living paycheck to paycheck. 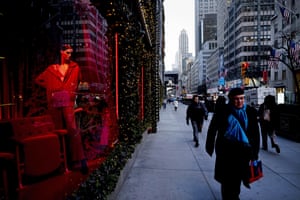 This isn’t sustainable. Even if the Fed weren’t raising interest rates – an unwise move under these circumstances – consumers would still be in trouble. Mortgage, auto and student-debt delinquencies are already mounting.

The last time household debt was nearly this high was in 2007, just before the Great Recession. Similarly, between 1913 and 1928, the ratio of personal debt to the total national economy nearly doubled. Then came the Great Crash.

The problem isn’t that Americans are living beyond their means. It’s that their means haven’t been keeping up with the growing economy. Most gains have gone to the top. If the majority of households had taken home a larger share of national income, they wouldn’t have needed to go so deeply into debt.

After the 1929 crash, the government invented new ways to boost the wages of most Americans – social security, unemployment insurance, overtime pay, a minimum wage, the requirement that employers bargain with labor unions, and, finally, a full-employment program called the second world war.

By contrast, after the 2007 crash the government bailed out the banks and pumped enough money into the economy to stop the slide. But apart from the Affordable Care Act, nothing was done to address the underlying problem of stagnant wages.

Ten years after the start of the Great Recession, we face another economic precipice.

It’s important to understand that the root cause of those former collapses wasn’t a banking crisis. It was the growing imbalance between consumer spending and total output – brought on by stagnant wages and widening inequality.

That imbalance is back. Trump is making it worse.