"What'll you do next," our heroine Beth Harmon asks a teenage boy who declares he wants to be chess champion of the world within three years. "If you're world champion at 16, what will you do with the rest of your life?"

He doesn't get what she means, but it's the central (if unanswered) question at the heart of the riveting drama The Queen's Gambit: you play the perfect game, you reach the top, you're still a kid — what then? 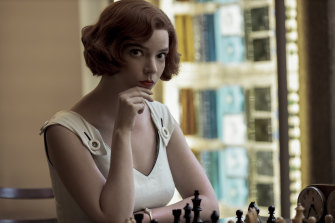 I'm not even passably good at chess, nor do I have much interest in it, but it doesn't matter in the slightest; in the hands of writer-director Scott Frank (and with the aid of some very neat CGI and pastel animation), the games in this seven-part series — and there are many — are tense, dramatic and absorbing affairs full of psychological tension, momentary lapses of reason and blindsiding moves that can turn a showdown on its head in an instant. Which is to say they are exciting.

Beth is orphaned as a nine-year-old when the car her mother is driving crashes headlong into a truck. Sent to the Methuen home for Christian Girls, young Beth (a quietly superb Isla Johnston) develops a fondness for the tranquiliser librium that's given daily to all the kids, and for the chess the school's janitor, Mr Shaibel (Bill Camp), teaches her in his basement workshop. Warm and fuzzy he's not, but he sees the makings of a future champion while almost everyone else barely notices she exists.

From the age of 13 or so, Beth is played by Anya Taylor-Joy, the anime-eyed actress who first came to notice in The Witch and most recently starred as Jane Austen's Emma on the big screen. Here, those enormous eyes are not windows to the soul, but weapons that are turned on all comers with equally unsettling intensity.

Adopted by an unhappy couple – less as a daughter than as a lady's companion for Alma (Marielle Heller, the director of the similarly addiction-themed, and likewise terrific film Can You Ever Forgive Me?) – Beth soon finds that chess offers a lot more than school: travel, money, respect and even a burgeoning sense of community. 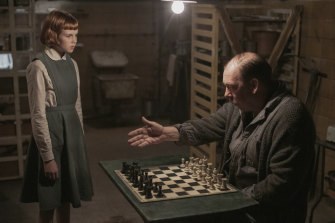 Alma is a better manager than mother, but for a girl in desperate need of family, their bond is real enough. And for both of them, chess fills an enormous void.

The tale plays out across the span of the 1960s, providing ample opportunity for fabulous clothes and locations (the Aztec hotel in Mexico City is an absolute standout). Inevitably, all roads lead to Moscow, and a showdown with reigning world champion Vasily Borgov (Marcin Dorocinski). But the real duel is between Beth's freakish talent and her self-destructive tendencies, played out via pills and booze.

There's never really any doubt of the outcome in this glossy, moving, and fabulously enthralling fantasy, in which Beth seems able to turn her addictions on and off almost at will. For the grimmer side of that story, you'll need to flip over to SBS and the excellent four-part series Addicted Australia.

This is a gritty observational documentary from the same school (and production company: Blackfella Films) as Filthy Rich and Homeless. Its 10 subjects – addicted variously to ice, alcohol, heroin and gambling – bravely forego the anonymity typical of treatment programs to give us a glimpse at what drives addictions (in a word: trauma), how hard it can be to beat them and how provisional and fragile that victory can be.

Not all of them make it, of course. But even for those who do, Beth's question will linger, perhaps for the rest of their lives, if they are to stay the course. "And what then?"

The Queen's Gambit is on Netflix; Addicted Australia is on SBS, Tuesdays at 8.30pm