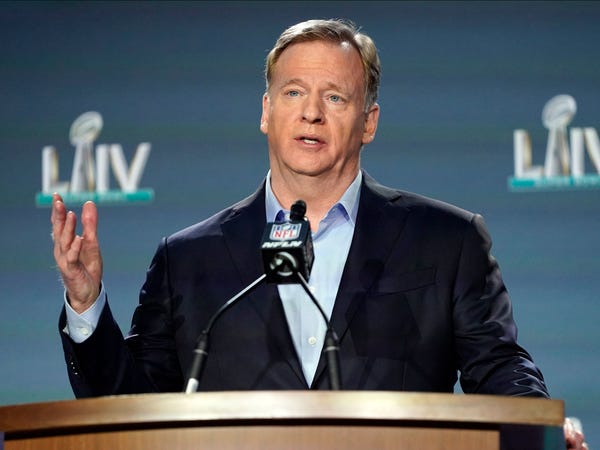 After three weeks of relative normalcy, the NFL is now on the brink of falling apart due to COVID-19.

Positive cases have disrupted the seasons of several teams across the league. The Titans have had the worst of it, with at least 23 players and staff members having tested positive for the virus. The continued outbreak within the Tennessee locker room pushed their Week 4 game against the Steelers to be postponed, and has now moved their Week 5 game against the Bills to Tuesday.

Elsewhere in the league, the Patriots are down starting quarterback Cam Newton due to COVID-19, and now have cornerback Stephon Gilmore out due to a positive test — one that notably came after the team had already played the Chiefs on Monday night. Other teams have had a single case here or there, or been forced to alter their schedule due to positive cases from across the NFL.

So far, the response from the league has been fragmented and ramshackle, raising more questions than answers and making one thing embarrassingly clear: there was no clear plan for this.

While gearing up to play through a pandemic, one might think that there was plenty of time to make protocols clear, put red lines in place, and do everything to ensure that football would carry on as close to normal as the times would allow. Instead, the NFL decided to mostly go about business as usual, and now, that decision has come back to bite them.

The NFL did not respond to Insider's request for comment.

The NFL hoped for the best, and failed to plan for the worst.

NFL commissioner Roger Goodell told Peter King just before the start of the season that the best way to handle playing through the pandemic "is just trying not to predict what the circumstances are going to be two weeks in advance, or even a week in advance."

As the past two weeks have shown, a little more predicting might have gone a long way.

Right now, the league's schedule is in jeopardy. The Titans have already had to move one game and are now shoe-horning in another on a Tuesday night, which in turn pushed back the Bills-Chiefs game scheduled for Thursday night.

Every time one team is forced to move a game, the Jenga tower that is the NFL schedule becomes a little less stable, with less room for error moving forward.

There were simple solutions to this easily predictable problem well before the season began. The NFL could have added an 18th week to the end of the season, with no games scheduled, that could have served as a make-up date for any games affected by COVID-19.

The league could have split the season into four quarters of five weeks each, with four games played before universal bye weeks in Week 5, 10, 15, and 20. Ahead of the season, such a change to the schedule might have felt drastic, but as the past two weeks have shown, it would have been quite useful to have some buffer built into the season before things kicked off.

Instead, the NFL gave themselves no room for error, and now are faced with the challenge of reassembling the plane of the regular season schedule while its already in the air.

The NFL's insistence on moving forward shows a misunderstanding of COVID-19, and is further risking the health of players and staff.

Seven months into the pandemic, much more is known about COVID-19. The virus is easily transmissible. People can carry and spread the virus before showing up positive on a test. In order to assure that an outbreak doesn't worsen after one positive test arises, the best course of action is to self-isolate for two weeks.

But the weekly nature of the NFL schedule doesn't allow for two-week isolation periods. Instead, after Cam Newton came back with a positive test result on a Saturday, the Patriots and Chiefs game scheduled for Sunday was pushed back one day to Monday night.

Self-isolating isn't something that works on your schedule. The virus won't give the Patriots bonus points for being extra safe with their travel plans when they're still sharing a locker room.

After the game was played, Patriots cornerback Stephon Gilmore tested positive for COVID-19. While we can't know whether he got the virus from Newton, it's certainly possible, and regardless, putting him and anyone else who had close contact with Newton ahead of the game was putting not only more Patriots at risk, but also their opponents.

The NFL's bend-don't-break defense against COVID-19 hasn't yet completely broken, but the bends are getting more and more dramatic.

This was entirely predictable.

Sports can work in the pandemic world.

The NBA is close to concluding a successful bubble season, just as the WNBA, MLS, and NWSL already have. The logistics of an NFL bubble would be significantly more difficult, given the number of people involved, but still, it's worth noting the option was there.

Moving forward without a bubble, the NFL still had the opportunity to watch the MLB season get started and learn from their mistakes. Through the first two weeks of the season, baseball was in serious trouble, with several teams suffering outbreaks and nearly a quarter of the league having to miss games due to COVID-19. But after that rocky period, things seemingly stabilized, and thanks to packed schedules and seven-inning doubleheaders, every team was able to conclude a 60-game season.

The NFL does not have the benefit of seven-inning doubleheaders. Every game takes a week. And by failing to build some extra weeks into the season, the league forced itself into a corner.

The season hasn't collapsed yet. The Jenga tower, while wobbly, could still hold. But thanks to the poor planning of the league and an insistence that everything would be alright, the NFL has left itself no room for error.

What could go wrong?